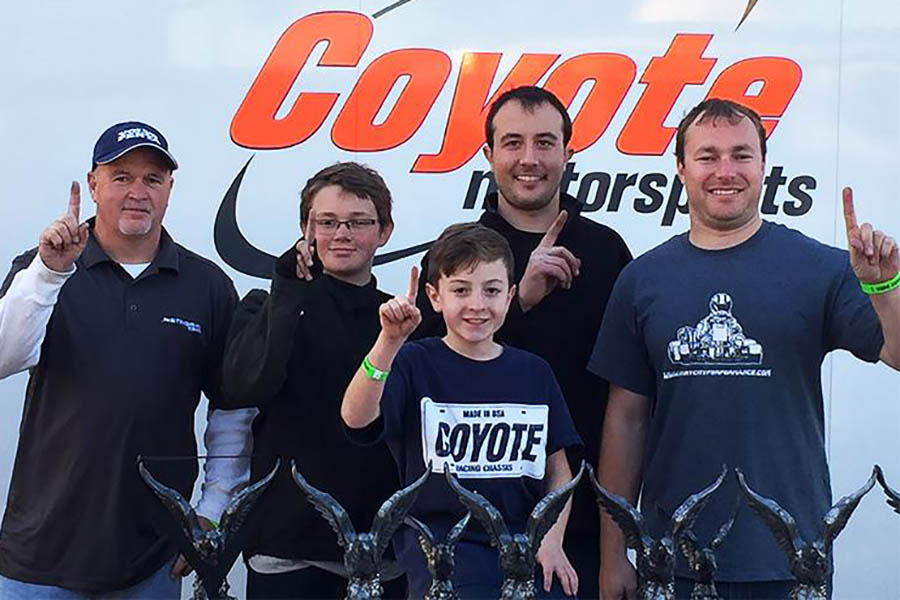 With the Gold Cup Grand National event postponed approximately one month due to Hurricane Matthew, Mother Nature would again rear her head during the rescheduled program as competitors dealt with a wide variety of conditions between a dry, albeit chilly day Saturday, and rain on Sunday.  An equal amount of wins Saturday and Sunday proved the Coyote Wide Tracks and XPs were up to the test with both the standard dry and rain setups.

“We couldn’t be happier with our drivers’ efforts at Kershaw, both in the dry and on the wet track,” Coyote owner Mark Lipari stated. “I want to thank everyone who helped us accomplish what was a very special weekend for me, and Coyote Motorsports. We really had a great season and to culminate the year with 14 wins at the Grand National meant a lot to me.

“I would like to thank Rob Smith at Kart City Performance and Dave and Sue Koehler at GT Machine for their support throughout the year. And a special thanks WKA’s Marie Borsuk and Buddy Long, who continue to work extremely hard on the series and always do a great job. We want to point out there are two new model Wide Tracks available for 2017, and we’re ready for orders. Call us for information.”

Meier would continue his standout weekend on Saturday with a big win in the Senior LO206 16-lap main event on his #30 Wide Track chassis. Meier and crew continued to gain on his Wide Track all day after qualifying four-tenths off the pole. He would finish a close P2 in the heat race before winning the main.  “We were a little off in the morning, but we made the right adjustments throughout the day to get the kart where we needed it. The Wide Track responds to adjustments and the more experience we gain with the chassis, the easier it is to know what changes to make.”

When rain hit Sunday, Meier was still on his game, scoring the feature win in the rain-shortened 10-lap race. The victory would give Sean a clean sweep on the weekend in Senior LO206 main events!

Blake Boon built on his Friday night money race win with a sweep of the Sportsman Pro Gas Lite finals.

Elmer Edmonson would win each day’s Sportsman Pro Gas Heavy mains in what would be his final weekend racing in the Sportsman category. Elmer will move to Junior in 2017.

Both Boon and Edmonson would be very competitive in the weekend’s largest class – Sportsman LO206. On Saturday in the dry, Edmonson would finish P4 and Boon P7. Blake started in the rear after a DNF in the heat.  He qualified P4, just ahead of Elmer who was P5.

Local CMP racer Todd Horton was a great story.  After some 35-plus years of racing, the karting veteran from South Carolina would accomplish his first national victory on a Wide Track that he purchased this past summer. After riding it at a few CMP club races, Horton would make a rare Gold Cup appearance at the Grand Nationals, and wheel his fresh Coyote mount to a win in the LO206 Masters main event Saturday, triumphing over fellow Coyote drivers Tim Stiefel and Brad Farmer.

Horton offered his thoughts on the new Wide Track.

“I’ve been watching the Coyotes for a long time, and they always looked good on the racetrack,” Horton offered. “I guess I wanted to be a little different, as there aren’t a lot Coyotes at CMP locally. We picked up a new Wide Track at the New Castle Gold Cup round this past summer, and it’s been a pleasure to drive. I’d encourage any driver looking for a new chassis to give Coyote a strong consideration.”

Stiefel would return Sunday to score a Grand National win for himself, nailing down the 206 Masters feature over Farmer.

Young Joey Cline made his first-ever Gold Cup appearance at the Grand Nationals. A club racer at our home track – Genesee Valley Kart Club in Avon, NY – Joey did a great job in his first national event. He would gain experience all weekend and cap it off with a P6 finish in Sunday’s Sportsman LO206 feature. We want to welcome Joey and the Cline family to the Gold Cup Series, and look forward to seeing them at future events!

Coyote Motorsports thanks all customers who helped make the 2016 Gold Cup season another success. We also want to thank all the WKA officials who work to put on and promote the series. We’re looking forward to another great year in 2017!

If you’re interested in joining the Coyote team, visit our official website at CoyoteKarts.com today, or call the shop at 585-352-0806 / email coyotekart@gmail.com.