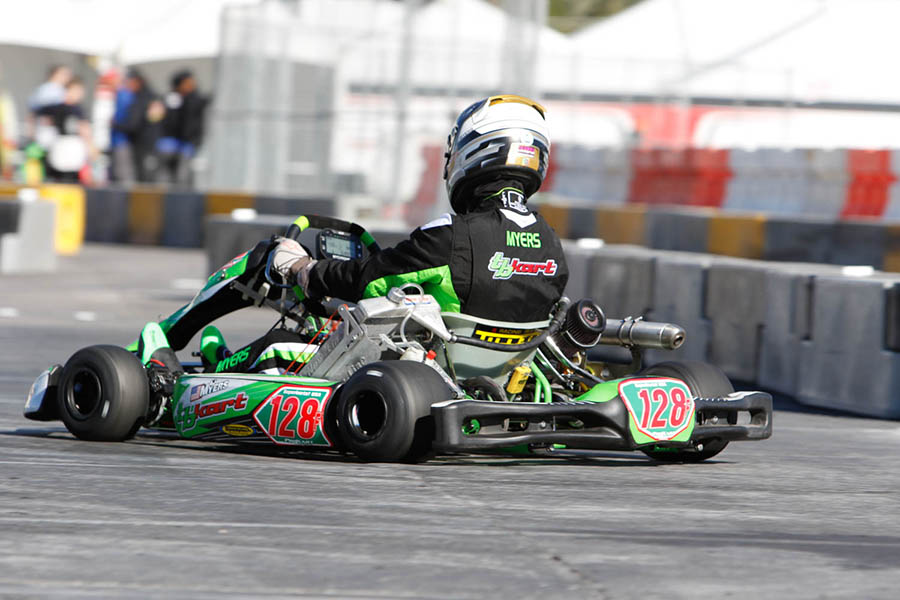 Everyone is chasing AJ Myers in the S1 division (Photo: On Track Promotions - otp.ca)

It was a cold and windy day in Las Vegas as the stage was set for remaining three days at the Superkarts! USA SuperNationals 20. Sunny skies greeted the nearly 500 drivers outside the Las Vegas Convention Center with lesser winds than those Wednesday which forced the cancellation of practice in the afternoon. Those winds kept the temperatures lower, and when the sun set, made conditions colder then we have seen in the past. All 10 categories ran their final practice sessions before ending the morning and afternoon groups with the official qualifying session to determine the starting lineups for the three rounds of heat races. Head to the EKN Event Page for full coverage of the SuperNationals 20.

The lone headline category in the morning groups is the S1 Pro Stock Honda division. Using the draft down the long straight, TB Kart USA driver AJ Myers secured the fast time of the seven-minute session. A lap of 49.473 stood until the checkered flag, fending off a late charge by Sodi Kart driver Jake French. The Texan came 33 thousandths short of demoting Myers off the top spot and pole position for the heat races. Last year’s dominant driver Danny Formal situated himself in third aboard the DRT Racing / DR Kart entry. Kiwi Matt Hamilton (Aluminos) was fourth with Axel Matus Robles (VCI Mexico / GP) in fifth. 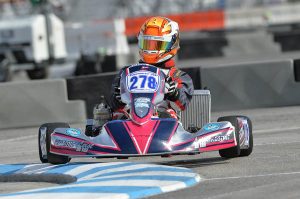 A number of fast drivers and Pro Tour contenders found themselves in the slower group for Mini Swift qualifying. It was no surprise to see a Benik chassis at the front as Santiago Trisini was the driver from that chassis stable to land the top spot with a 56.023-second lap. RPG / Kosmic driver Guilherme Figueiredo was off by just eight hundredths of a second to claim the second spot. Barbados pilot Zane Maloney (KartSport North America / Formula K) was third quickest, still within a tenth of Trisini’s time. In total, three Benik filled up the fast five with Felipe Bartz and Rafael Camara making up the last two spots.

The number rose to four in the Micro Swift category with Benik taking four of the fast-five. British driver Freddie Slater laid down a monster lap – 57.253 – to secure the fast time. Brazilian Vinicius Tessaro was in the draft, only 47 thousandths off. You have to go back four tenths to find third quickest lap, put in by Frankie Iadevaia – who is giving Nitro Kart a solid SuperNationals debut in qualifying. SKUSA Pro Tour championship leader Kai Sorensen (LEM / Praga) was fourth with SpringNats winner Brandon Carr rounding out the top-five. 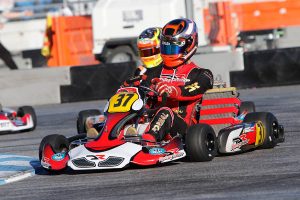 Danny Formal ended the day on top in the KZ division (Photo: On Track Promotions – otp.ca)

It appears there may be more than one headline category handing over the $20k bounty for victory at the SuperNationals this year. KZ is filled with former winners, reigning world champions and a number of podium finishers. Danny Formal edged them all for the pole position. DRT Racing / DR Kart driver laid down a 48.722-lap to secure the pole position in the final group to qualify, hitting the track after 8pm,. Russell Karting Specialties / Parolin pilot Lorenzo Camplese made a late charge, coming up 16 thousandths short of Formal’s time. Former winners Anthony Abbasse and Bas Lammers were nearly identical in their DKC / Sodi Kart machines, placing third and fourth and within seventh hundredths of Formal. S1 polesitter AJ Myers was at the top of the time charts in practice, ending up fifth with the fast-five posting times within 89 thousandths.

In X30 Senior, Italian Marco Maestranzi is looking to leave $20,000 richer, succeeding in the first step by securing the pole position. The Top Kart pilot was fast all day, ending up on top of the time sheets in qualifying with a 50.561-lap. Aussie driver Joshua Car (CompKart) came just two thousandths short of stealing the pole position with a minute remaining, unable to better his time. Top American was KartSport North America’s Brandon Jarsocrak. The Praga driver posted the third quickest time, jumping ahead of Ryan Raffa (PCR), who shocked the paddock with his fast speed to earn a front row start for all three heat races. Rounding out the fast five was British driver Danny Keirle, giving Fullerton its best effort at the SuperNationals thus far. 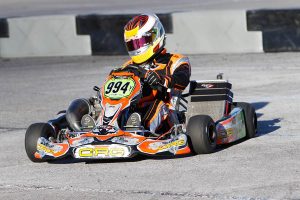 The S2 Semi-Pro Stock Honda division is full of talent this year, and among the emerging drivers is Rory van der Steur (FA Kart). In contention at the SummerNationals, he’s carried that speed into Las Vegas, earning the pole position. It was just two hundredths separating him and last year’s standout Austin Wilkins (Sodi Kart). The 2015 SuperNationals runner-up was unable to better the 49.512 lap by Rory. Hunter Pickett (Aluminos) put in his best SuperNationals qualifying effort to date with the third fastest time. KC Cook (Praga) is another new name at the front, while Garrett Boone (3G Kart Racing / Intrepid) – one of the most experienced in the field – capped off the fast five.

S4 Master Stock Honda was the first class on the track for the afternoon qualifying session. It is a stout field of drivers in the field, and qualifying saw the 2014 Pro Tour champion and SuperNationals winner Gian Cavaciuti emerged as the early contender. A 49.990-second lap put the VCI Mexico / GP driver on the pole position for the three heat races. International drivers will fill out the front two rows with Antonio Perez a close second to his teammate Gian. Renato David added another fast-five qualifying effort to back up his X30 Master performance, with the Birel ART driver landing third ahead of Aussie Michael Patrizi (Ricciardo). Making his 20th SuperNationals start, Bonnier Moulton (Tony Kart) will go from P5 in the heat races, vying for his record-tying fourth SuperNationals victory.