Formal looks to double up in Las Vegas 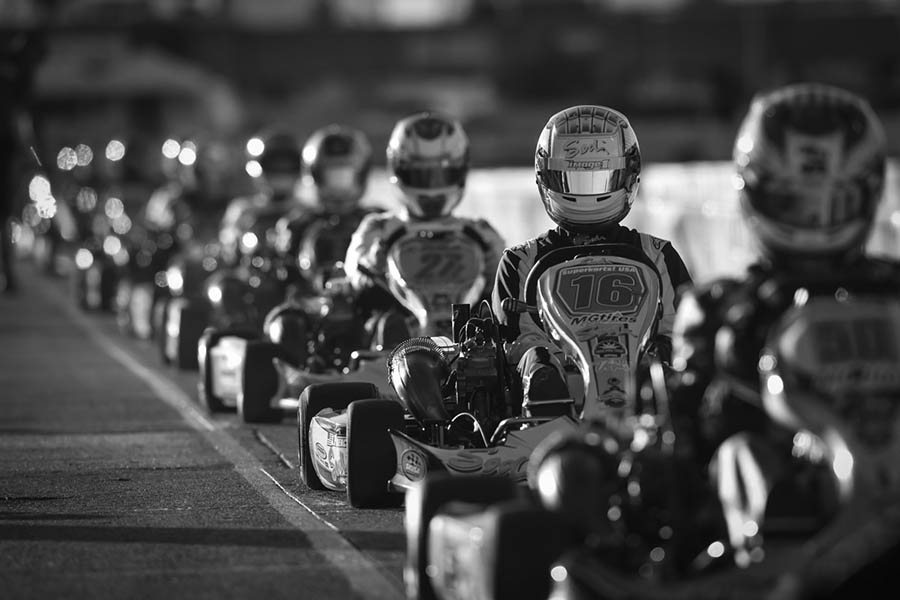 The inaugural Superkarts! USA SuperNationals was run in November 1997, and the category that headlined that event was the 125cc Moto. Today, S1 Pro Stock Moto is the headline shifterkart division in North America, featuring the best drivers from coast-to-coast. Over the last few seasons, international drivers have found themselves driving the Honda six-speed powerplant – earning four of the last five SuperNationals victories. This year, there are just four from outside North America taking on the S1 field in Las Vegas. 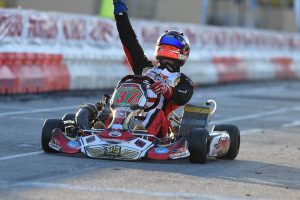 2015 SuperNationals winner Danny Formal is attempting to repeat while fight for the Pro Tour title (Photo: On Track Promotions – otp.ca)

Among the international stars taking part in the S1 division is defending SuperNationals winner and current Pro Tour championship leader Danny Formal. The DRT Racing / DR Kart driver put in an amazing performance last year in Las Vegas, driving away from the field every session, sweeping the event for his first SuperNationals triumph. The Costa Rican has been just as hot on the Pro Tour in 2016, placing runner-up in the last three main events to establish himself as the point leader heading into the Las Vegas. Formal leads by 75 points, focus on defending his SuperNats victory in an effort to clinch the title.

Behind him are two championship caliber drivers. Kiwi Daniel Bray knows what it takes to be a SKUSA Pro Tour champion, earning the crown in 2011. The longtime GP driver scored victory at the SpringNationals – his only podium finish on the year. Bray has two podium finishes at the SuperNationals in five starts, needing a fourth to help his cause at cutting into the 74-point advantage Formal has. In the mix is Texas driver Jake French. One of the early graduates of the S5 Junior program, the last five seasons have seen French grow from just a kid to a full-time contender as the lead driver under the DKC / Sodi Kart operation. The COTA champion stood on the Pro Tour podium twice, and trails Formal by just 75 points. French is going to have to put in his best performance in four S1 starts, with a 10th place back in 2011 as his best result to date. 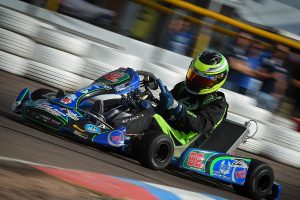 Kiwi Daniel Bray is in the hunt for his second Pro Tour championship (Photo: On Track Promotions – otp.ca)

In total, nine drivers are among those mathematically in the hunt for the Pro Tour standings. One who will not have the opportunity to fight for a spot on the championship podium or a SuperNationals victory is PSL Karting driver Oliver Askew. The Florida driver told EKN over the weekend that he will not be traveling to Las Vegas, coming down with walking phenomena, most likely due to the busy travel schedule with the Team USA Scholarship program in the UK in recent weeks. We wish the Birel ART driver a speedy recovery.

2013 was a historic SuperNationals. Crazy wet weather, and amazing performances on the track, including SuperSunday. The year also marked the first time the $10,000 purse was awarded by Superkarts! USA to a S1 winner who was a regular Pro Tour racer. That driver was Oregon’s Joey Wimsett. The victory was the first at the SuperNationals, and points gained throughout the event helped Wimsett to come from 161 points out to land the title – the largest by any driver in Pro Tour history. The SpringNationals Round One runner-up is now 170 points out of the top spot in the standings, feeling very confident in his PGR / Ricciardo ride.

Two other drivers have victories on the season. AJ Myers stamped his name into the record books with a double win weekend at the SummerNationals. It was a dominating performance by the Florida driver, helping to give TB Kart its first victories on the Pro Tour. Heading to Las Vegas, Myers is out of the title chase by 185 points. A performance like his SummerNationals weekend could put the former KZ podium finisher within range of the top-three at the end of SuperSunday. Billy Musgrave landed his second Pro Tour victory at the opening round in Phoenix. The MRC / Praga driver has yet to find himself back on the steps, looking to better his fourth place finish from a year ago.

Who to Watch: Big Names Looking to Impact 20th SuperNationals 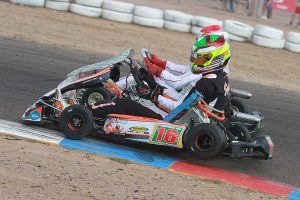 Jake French is attempting to slide in and steal the S1 title (Photo: EKN)

$20,000 is on the line for former winners in the category at the SuperNationals. Formal and Wimsett are in the running, along with the oldest driver in the field – Ron White. In 2002, White (CRG) drove to his first SuperNationals victory. 14 years later, the former SKUSA ProMoto Tour champion is gunning for more SuperNationals glory. White’s last podium at the SuperNats was 2013. Wesley Boswell (Kosmic) joins the list of returning drivers, as the 2003 SuperPro winner is jumping back behind the wheel in Las Vegas in nearly a decade. The six-time world tire changing champion elected the S1 category instead of KZ, where he would have been eligible for the $20k payday. It will be great to see ‘Bos’ back behind the wheel in Las Vegas.

As mentioned in the KZ preview, Indianapolis 500 winner Alexander Rossi is making his SuperNationals debut, running both headline shifter divisions. The NorCal native is teaming up with former karting coach and veteran racer Matt Jaskol under the CRG Nordam tent. Each are looking to battle at the front. 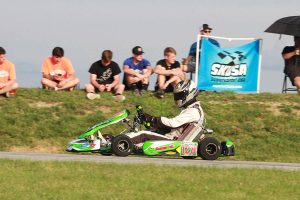 We are familiar with the name Jake Craig at the front in TaG competition. Now, we get a chance to see him compete in the shifterkart ranks as the California driver is making his first S1 start at the SuperNationals. Craig is the 2014 SKUSA Pro Tour champion in TaG Senior, and looking to make his mark in the X30 Senior race this year. Double duty will give the OTK driver two chances at earning his first SuperNationals victory. Kiwi driver Matt Hamilton (Aluminos) is one of three podium finishers from last year in the field. Hamilton tasted the sweet thrill of victory in Las Vegas back in 2013 in the S4 division. The two-time Streets of Lancaster Grand Prix victor certainly has the speed to compete for a podium finish once again.

This is it, where it all began. The 125cc Moto division was THE class at the inaugural SuperNationals. 20 years later, the S1 Pro division headlines the top North American drivers in @superkartsusa competition. The #SuperNats20 is another stout field of drivers piloting @hondaracing_hpd powerplants around the @vegas LVCC. Can Danny Formal repeat his dominating performance from a year ago to clinch his first #SKUSAProTour title, or is someone else going to step up on #SuperSunday #EKNatSKUSA #TeamCooperTire 2015 – @DannyFormal_ofical 2014 – @JordonLennox 2013 – @JoeyWimsett 2012 – @Simas_Juodvirsis 2011 – @MirkoTorsellini 2010 – @Speeder41 2002 – Ron White 2001 – @Scott_Speed 2000 – @Scott_Speed 1999 – Memo Gidley 1998 – @DarrendElliott 1997 – Alex Barron