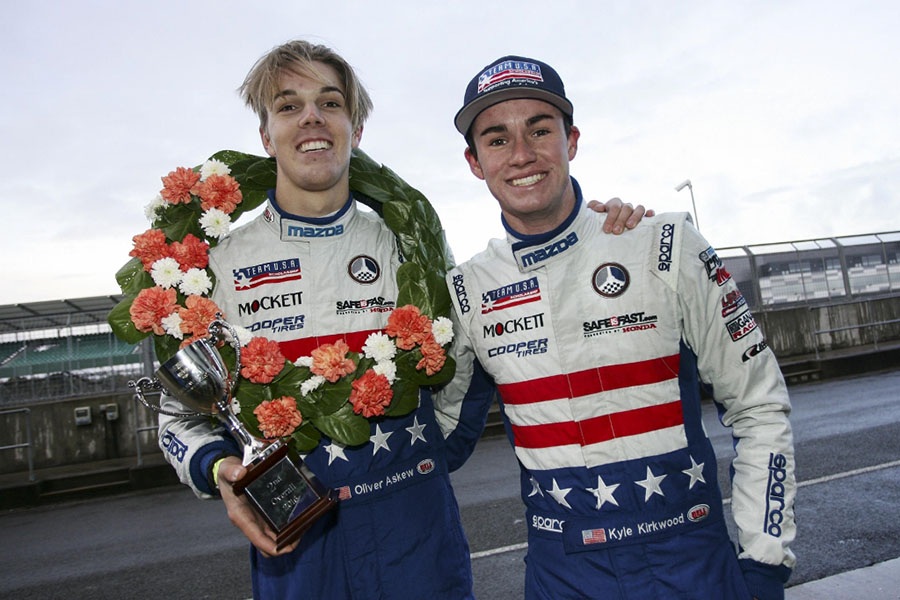 There is always a threat of rain at Silverstone in November, and while cool, dry conditions prevailed for most of the weekend, the precipitation arrived shortly before the 15-lap Grand Final – as if the action needed spicing up!

The day began with Kirkwood starting ninth on the grid for the Progression Race and needing to finish among the top six to move on. No problem. The 18-year-old from Jupiter, Fla., was in the lead before the end of the opening lap and was never challenged. He even set the second fastest race lap of the entire weekend at 1:02.286 – only fractionally behind Murray’s 1:02.206 set yesterday.

Kirkwood was in action again a little more than an hour later for the Last Chance Race in which he lined up 31st and needed to finish among the top six to qualify for the Semi Final round. His progress wasn’t quite as meteoric as former F1600 Championship Series winner Scott Andrews, who breezed from 33rd on the grid to the lead and subsequently the win on Lap Seven, but he still posted a fine drive to third.

Merely 75 minutes later, Kirkwood was lining up on the grid in 29th position for his third race of the day, Semi Final One. This time he required a top-18 finish to make it through to the Grand Final. Competition, of course, was significantly tougher, yet Kirkwood once again proved up to the challenge with a 12th-place finish. Earlier rival Andrews, from Australia, made great progress early but failed to qualify for the final after tangling with another car on the fourth lap.

“I’m happy with that Semi,” said Kirkwood. “My first goal today was to make it to the Final. And now that I’ve accomplished that I’m going to give it my best shot. I’ve been holding back just to guarantee my spot in the Final but now the gloves are off! Like I said in my blog, I’m determined to take that top spot!” 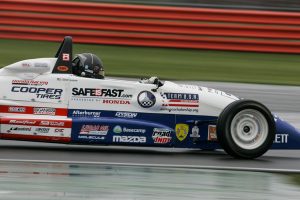 Askew entered the final lap in third place but timed his move to perfection, maneuvering brilliantly around the outside under braking for Brooklands and holding on to win from Moyers by a scant 0.097 second! Foster and Thompson also were close behind in third and fourth.

“He drove amazingly well,” said a clearly impressed Foster. “It’s not easy out there.”

The task facing Askew and Kirkwood was even more difficult for the 15-lap Grand Final following a heavy shower of rain soon after the Semi Finals had been completed. Askew lined up second on the grid, due to the earlier Semi Final having been won convincingly by Murray, with Kirkwood back in 23rd. Both American youngsters reckoned they had a point to prove.

Murray, who already this year had claimed the BRSCC Avon Tyres British FF1600 Championship and, two weeks ago, the Formula Ford Festival, made use of his wet-weather experience to edge out Askew at the start, while Kirkwood somehow fought his way all the way from 23rd to 11th after just one trip around the 1.639-mile circuit!

Murray quickly made his escape at the front of the pack to score a clear victory. Askew initially came under pressure from Foster before weathering that challenge and pulling well clear of the chasing pack to finish second.

“These have been the best three weeks of my life,” said Askew after being presented his trophy by three-time Formula 1 World Champion Sir Jackie Stewart. “I’m so thankful for the opportunity and what Jeremy Shaw stands for – that being the support of young American drivers who work extremely hard to work their way to the top.

“The race today was very tense. The conditions were unlike anything I’ve ever experienced before, so I had to adapt from the lights going out. I stayed in second from start to finish and tried to keep it on track for the last few laps to bring home a very memorable result.

“With five podiums out of six races here in England, I am definitely going home with a smile on my face. “I hope to use this experience for the future and I hope to keep progressing in the world of motorsport.” 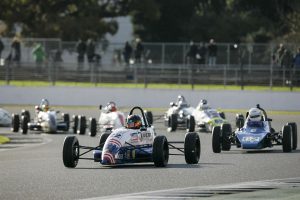 Farther back, Kirkwood continued to make progress toward the front. He was up to fifth place by Lap 10, then within the space of just one lap made up a deficit of more than a second to the next group of cars. He climbed briefly into third place on the penultimate lap, only to be overtaken by veteran Josh Fisher, who had started 19th, on the final lap. Still, fourth represented a magnificent effort.

“I gave up third place,” sighed Kirkwood. “I saw Fisher was faster than me but I didn’t know what position we were in or how many laps were left. I couldn’t see my pit board because of all the spray from the rain, so I didn’t contest the position. I figured I would tuck in behind but then when we went across the line he threw his hand in the air and I realized it was the last lap. It’s frustrating but it’s still been a great day. I’m happy with the result, especially compared to how it was looking yesterday.”

Cliff Dempsey Racing teammates James Raven, who also began today in the Progression Race, Texan Chase Owen and Thompson all finished among the top 14 in the Grand Final, with Thompson recovering from a couple of incidents to post the fastest lap of the race, 1:12.307, on the final tour.

“I couldn’t be happier with the performance of both of our boys and that of Cliff Dempsey Racing,” said Team USA Scholarship founder Jeremy Shaw. “I’m told they did a fabulous job of representing their country and the scholarship program in last night’s Silverstone Club drivers’ forum and they have driven magnificently both in the Formula Ford Festival and the Walter Hayes Trophy. If they can continue to create opportunities for themselves, there’s no doubt these two young men have extremely bright futures ahead of them.

“I also want to say a big thank-you to all of those who have made the Team USA Scholarship possible.”