Championships decided among intense, close racing at the Rio 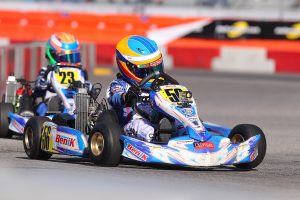 Glorious weather, intense racing, international flair and a black-tie affair all provided for yet another highly regarded MAXSpeed Entertainment promoted event. The 2016 Sofina Foods US Open Presented by Fikse Wheels series finale at the Rio All-Suite Hotel & Casino just off the famous Las Vegas Strip was again met with rave reviews, with the highly-touted 12-turn, .72-mile temporary circuit delivering close and fantastic racing, and the event atmosphere full of fun and camaraderie. With race winners honored, class champions crowned, awards received and even a wedding, the US Open of Las Vegas was an unforgettable event.

“First I would like to thank all the competitors, families and partners for their continued support of our program at MAXSpeed Entertainment, as well as all our staff for continuing the high level of service our clients deserve,” explains Director of Promotions Garett Potter. “As well, a big thank you to the entire Rio hotel staff and Caesar’s Entertainment for the use of their facilities, and their world class customer service.”

Entering the event as the AM Engines Rotax Micro MAX championship leader, Diego LaRoque started off on the right foot by grabbing the pole position over Santiago Trisini. Winning heats one and three, with Branyon Tiner coming out on top in heat two and Trisini cruising to the heat four victory, LaRoque earned the pole position for Saturday’s final. The Micro MAX final came down to the final lap, with Trisini making a pass for the win over LaRoque. James Egozi rounded out the podium, making it a Benik Kart 1-2-3. LaRoque added the US Open championship title, his second in as many years, to his growing list of accomplishments which includes the Rotax MAX Challenge Grand Finals Micro MAX Championship and US Grand Nationals victory from earlier in the year. 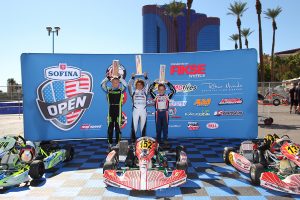 The PSL Karting Rotax Mini MAX class at the US Open of Las Vegas can be summed up in one word: dominance. Entering the finale round second in the points, Jak Crawford was able to wrap up the Mini MAX title with an utterly dominating performance. Leading every lap of every session, Crawford qualified on the pole, won all four heats and stunned the crowd by winning the final by more than 15 seconds. Crawford was joined on the podium by Team Koene USA teammate Dale Curran, who overcame some heat race adversity to finish second. Aidan Fox was also able to rebound from the heats to complete the podium.

Another stunning performance came via Tyler Gonzalez in the Koene USA Rotax Junior MAX category. Forgoing the Mini MAX class, where he was leading the points, Gonzalez made his Rotax Junior class debut in Las Vegas and did not disappoint. While the pole position went to Yuven Sundarmoorthy, Gonzalez took the final heat race win with two going to Canadian Ryan MacDermid and one to Steven Mallozzi. MacDermid and Gonzalez lined up on the front row for the final, and Gonzalez was able to steer his Ocala Gran Prix Tony Kart clear from the difficult outside row. Leading the majority of laps until a bid for the win from MacDermid in the closing stages, Gonzalez made his way back to the lead to take the checkers and corresponding 2017 Rotax MAX Challenge Grand Finals ticket. MacDermid settled for second with Jose Miguel Alvarado in third. The championship however would be MacDermid’s, who comes off an impressive run at the recent Rotax Grand Finals. Gonzalez would also be honored at the first US Open Championship Gala Dinner with the Motorsport.com Emerson Fittipaldi Driver of the Year Award.

Austin Garrison also reaped the rewards of a successful event in Las Vegas. While Ryan Norberg scored the pole position in the Rolison Performance Group Rotax Senior MAX division, and the first heat win, the second and third heats went to David Malukas. Garrison edged out the rest for the fourth heat victory, and would start second on the grid for the final with Malukas earning pole for his heat race efforts. After a red flag incident early, Garrison held the advantage the majority of the final, but with mounting pressure from Marco DiLeo. Running fast lap times, South Africa’s Jordan Sherratt and France’s Thomas Drouet reeled the duo in during the closing laps. DiLeo made a pass on Garrison just after the two-to-go sign making it a five kart battle for the win as Malukas joined the mix. Garrison went back to the point in his J3 Competition COMPKART at exactly the right time, pulling a slight advantage to take the victory with Sherratt in second and DiLeo third. Garrison not only pulled off the race win and accompanying 2017 Rotax MAX Challenge Grand Finals ticket, but also won the championship title and a place in the 2016 Mazda Road to Indy $200K USF2000 Shootout. 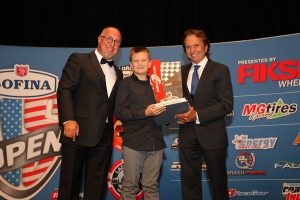 Tyler Gonzalez was awarded the Motorsport.com
Emerson Fittipaldi Driver of the Year

In Falcone GP Rotax MAX Masters, Billy Cleavelin started off with the pole position and went uncontested in all four heats. Looking to wrap up the race win and a perfect event, Cleavelin lead the final until lap 20 when a flat front tire dashed his hopes. This opened the door for Michael Groff to take the feature win, followed by Chad Wallace and David Pergande. Cleavelin held on to finish fifth, and left Vegas with the Masters MAX championship title.

Davide Greco set the tone for Dallas Karting Complex Rotax DD2 MAX action with the pole position over Mercedes DTM pilot Robert Wickens. Indy Lights driver Zach Claman-Demelo let his intentions be known, taking the first three heat wins, with one going to Greco. Starting on pole for the final, Claman-Demelo led the majority of laps, relinquishing to Wickens mid-race. Returning to the point but facing pressure, Claman-Demelo held on to take the checkers and Grand Finals ticket. Greco crossed second with Wickens third making it an all-Canadian podium. Dev Gore was awarded the DD2 MAX title for his overall championship effort.

Pole position in the Dallas Karting Complex Rotax DD2 MAX Masters class went to 2016 US National Vice-Champion Luis Schiavo. Schiavo followed that with the heat one victory. The remaining heats were won by Luis Zervigon to start the final from the point. Highlighted in their own on track session, a racy final ensued as a four kart pack battled for the lead. Zervigon was the victim of an aggressive move, and was shoved into the barriers. This left room for Christophe Adams to take the win and 2017 Rotax MAX Challenge Grand Finals ticket. Camilo Matiz crossed third but was relegated to fifth for a driving infraction, putting Schiavo second on the podium with Nathan Mauel promoted to third, who also claimed the overall class championship. 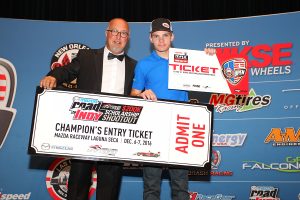 After finishing second in the DD2 US Open standings last year, DKC Sodi Kart pilot Jake French was back in Sin City to take on the Energy Kart USA Shifter Senior class. Taking the pole position and wins in the first three heats, French suffered from mechanical issues in heat four. French was demoted to third in the heat points, which opened the door for veteran shifter pilot Ron White to nab pole for the final. Championship contender Sabre Cook took the holeshot from the outside and led the opening laps. French then made his way to the point and from there cruised to a nearly six-second victory. Cook came home second, securing the Shifter Senior championship title, with Jake Craig completing the podium in a solid shifter effort.

“Congratulations to all our champions who put in the work to battle with the industry’s best drivers,” continues Potter. “We are looking forward to the first round the Florida Winter Tour in Homestead where we will have a few surprises that our drivers are going to love.”