Superkarts! USA is celebrating a major milestone in its exciting history this month with the 20th running of their prestigious SuperNationals, the race that came from humble beginnings in the Las Vegas desert in 1997.  Hitting that 20-year mark is extremely significant, as it speaks to the dedication and passion of the people who helped build SKUSA’s foundation and to those who have fueled its continued growth.  To this end, Superkarts! USA Tom Kutscher announced last month that the company would be debuting a new Hall of Fame this year to celebrate this organization’s rich history.  The first class of inductees will be honored on SuperSunday at this year’s SuperNationals, and the inaugural foursome includes Don Janowski, Jim Murley, Alan Rudolph and Greg Bell. 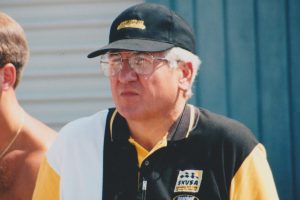 As the founder of Superkarts! USA, motorsports veteran Don Janowski leads the inaugural class of inductees in the SKUSA Hall of Fame (Photo: Rob Howden – EKN)

These four gentlemen were influential players during the early years of the Superkarts! USA program and have left an indelible mark on the organization and the community.  Sadly, Don and Jim passed away earlier this year, but anyone involved during the first handful of seasons can attest that without them, SKUSA would simply not exist.  Don Janowski took the initial SKUSA ball and ran with it; tirelessly promoting gearbox racing while building a regional series filled with hardcore karting outlaws. When Don passed the torch on to Jim, the organization emerged from karting’s status quo to become the major player on the national scene, taking SKUSA karting coast-to-coast, from the desert into the city, and onto HDNet television. The passion for the sport that they both possessed is what positioned Superkarts! USA to stand out from the karting establishment.

“It is with great pride and humility that we announce the inaugural class of inductees to the Superkarts! USA Hall of Fame,” offered Kutscher. “I’m blessed with the opportunity to do what I love because of the blood, sweat and tears that Don and Jim put into the SKUSA program in the 1990s. I raced with them, I supported them, and now we can honor them.” 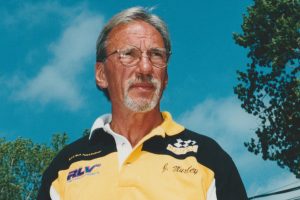 When Jim Murley was handed the SKUSA reins, his vision was to take shifterkart racing to the next level, to present it as a “motorsport in and of itself” (Photo: Jeff Deskins – ShiftSport)

“When it comes to Alan Rudolph, he’s simply one of our sport’s living legends,” Kutscher continued. “He’s won regional and national Superkarts! USA events, on purpose-built kart tracks and temporary circuits, and he’s done so with class and dedication. We were privileged to have him as part of our raceday staff for a time, and he most certainly deserves this great honor. Greg Bell and his Leading Edge Motorsports program have been here from the start, as a powerhouse on the ProMoto Tour of the late 90s and early 2000s, and he has been with us as a foundation industry member for the entire history of the SKUSA Pro Tour and our ProKart Challenge. Greg’s dedication, passion and commitment have been so important in maintaining our growth and stability.”

To that end, SKUSA is thrilled and honored to introduce the first class of inductees to the new Superkarts! USA Hall of Fame: 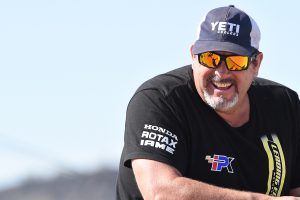 The names ‘Greg Bell’ and ‘Leading Edge Motorsports’ are synonymous with Superkarts! USA, as the Californian’s team has been winning in SKUSA competition for the last 20 years (Photo Todd McCall – otp.ca)

GREG BELL – The owner of Leading Edge Motorsports was a key builder in SKUSA’s foundation, and has been a powerhouse team since the very debut of SKUSA’s national program. Bell’s LEM operation was a works team for Trackmagic, and his drivers pushed the American-made chassis to the front.  Bell teamed with Trevor McAlister in 1999 to go on a run of ProMoto Tour victories to end the season, beating the best gearbox drivers in the country at Pat’s Acres and the World Finals at the Oklahoma Motorsports Complex. The passionate team owner won the SKUSA Moto World Championship with Bobby Wilson in 2000, and won the Shifter Kart Illustrated Team of the Year award in 2001 with a team that was successful in all four SKUSA ProMoto Tour classes with drivers like Ron White, Trevor McAlister, Bryan Eady, and Tyler Lewis. In recent years, Bell has been a stalwart supporter for the California ProKart Challenge and the Pro Tour, winning races and championships with pilots like McAlister, Hunter Kelly and Kai Sorenson.

DON JANOWSKI – Simply put, Don is the founder of Superkarts! USA and he made it all possible in the mid-90s when he embraced the SKUSA program. Don worked with local clubs to launch a regional series for shifterkart racers, growing it into a traveling road show for Midwest outlaws who loved slamming gears and racing hard.  He and his wife Susan’s dedication to their racers is what helped set the SKUSA program apart and the time devoted to organizing the first SuperNationals in 1997, and those that followed, laid the foundation for the future of the company.

JIM MURLEY – Jim’s passion for the sport and dedication to Superkarts! USA cannot be over-stated.  His belief in the SuperNationals fueled the launch of the ProMoto Tour, and despite being in his early 60s at the time; his energy and vision motivated everyone around him. Jim thought outside the box and was not afraid of the hard work that was needed to make his plans come true.  Murley did it all, driving the iconic SKUSA rig to his ProMoto Tour races, and he was the guy who set up the awning on Wednesday and tore it down on Monday. A shirtless Jim Murley, work gloves on, slinging tent poles, was a regular sight on the PMT.  Jim was equally as comfortable in dress pants and a dress shirt during race days, as he understood the need to approach his program with professionalism.  He went ‘all-in’ for SKUSA and reveled in the chance to be a part of something special. One of Jim’s tag lines for SKUSA in those formative years was that SKUSA was ‘Not Your Daddy’s Go-Kart Club’.  For certain, Murley was a visionary who wanted to push the envelope, and he did exactly that, elevating the organization to the next plateau, turning the SuperNationals into the biggest race in the country. 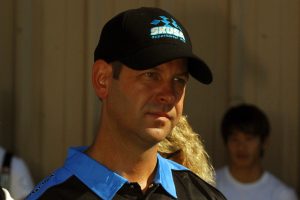 As one of the finest kart racers in America’s history, Alan Rudolph won his fair share of SKUSA events, including multiple victories on the ProMoto Tour and in the King of the Streets shootouts (Photo: Todd McCall – otp.ca)

ALAN RUDOLPH – The veteran driver is a true ambassador of karting, and is currently the leading educator in the sport. As the long-time Chief Instructor at the Bondurant Superkart School, Alan moved to Houston, Texas in 2015 to launch the Alan Rudolph Racing Academy at the new Speedsportz Racing Park. Among all of the racing that he did in his youth, Alan was an early Superkarts! USA Great Lakes Pro Tour competitor and was also a frontrunner and race winner in the inaugural SKUSA ProMoto Tour, winning in the headline S1 class. Alan was also victorious in the second SKUSA King of the Streets race, which was held at the famed and treacherous Quincy in the Park, before winning four more times at the Rock Island Grand Prix.  Alan was the chassis designer and lead driver for the RBI team that raced SKUSA events in the 2000s, and he also served on the SKUSA Pro Tour crew in 2014 as a Race Director and Driver Ambassador.