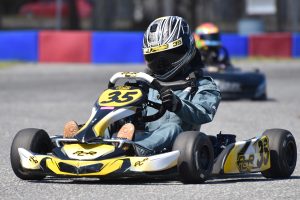 Built in the mid 1960’s, the 103rd Street Sports Complex was later taken over by the City of Jacksonville, which currently owns the facility run by the North Florida Kart Club. It’s 3,220 foot circuit includes a high-speed 1,000 foot straightaway heading into a high baked first turn leading into a series of S turns that enter into another straight which leads to a high banked oval configuration that enters a unique banked Monza taking racers back to the beginning of the back straight.

Sunday Warren earned the pole with a 39.420 seconds lap that was 0.170 seconds faster than outside pole winner Aren Smith’s 39.590 seconds effort.  From there Warren handily won the heat and feature races.

“The 206 classes were fun.  There was a big class in Heavy but in Medium it was a little smaller. But still, I had fun racing other drivers,” Warren said Sunday.  “The Eagle chassis handle great in those races.  I want to thank TS Racing, AKRA, Vega Tires and everybody that helped put this series on this year and hopefully they’ll do it again next year.”

In addition to his 206 wins Warren also won both TaG Senior classes, this time driving a DR Racing Chassis.

Warren also turned Sunday’s fastest qualifying lap at 34.440 seconds.  That effort was 1.039 seconds faster than Amiridis’s 35.479 seconds attempt.  In the feature Warren rocketed away from the start building a 10.417 finish line advantage over Amiridis. 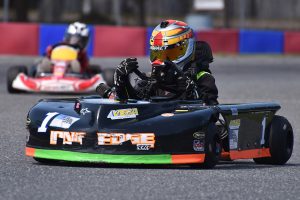 “The TaG Senior classes were fun as they always are here at Jacksonville, long straights, high speeds. They were good races,” Warren described adding,  “The DR chassis handled good and the tires worked great.”

After taking the green flag Barros slipped into the lead ahead of Anderson for the lead.  Barros continued building that lead with every lap.  When they reached the stripe for the final time Barros was 7.523 seconds ahead of Anderson.  Further back Derek Grebnger finished third 20.458 seconds late.

Reed trailed Sanders by 9.664 seconds in the Heat Race and by 8.491 seconds in the Feature. “The kart handled good and my Pop Pops motor was fast,” credited the 7-year-old winner.

Sunday Sanders spun a 39.195 seconds lap for the pole from where he beat Reed in the Heat Race by 12.568 seconds and by a full lap in the Feature Race. 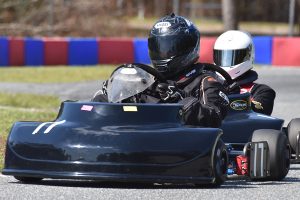 “I pushed the kid in front of me ahead so I could get behind her and hopefully get into the draft, but she got me in the straightaway,” described the 11-year-old double winner.  “I just stayed behind her until I could get a draft around her.  The kart handled really fast in the back.  That’s where I got by her. The straightaway was fast and it was good everywhere else.  I want to thank my dad for working on my kart and my mom for making sandwiches.  I also want to thank PCR Karts for helping me out with a good kart and my friend Brad for aligning the kart”

Ty Canoles captured both days Yamaha Junior.  Saturday the Daytona Beach-based driver was second fastest qualifier turning a 38.724 seconds lap that was 0.523 seconds slower than pole winner Indy Kassy’s 38.201 lap time.  Piloting a Top Kart chassis, the 15-year-old Canoles quickly climbed into the lead building a 4.663 seconds lead over Kassy in the Heat Race.  Kassy closed the gap to a 0.422 seconds difference in the feature.

Sunday’s qualifying was closer with Canoles turning the pole lap just 0.055 seconds ahead of Kassy.  Kassy captured the Heat Race win with a 0.660 seconds advantage only to loose the feature to Canoles by 0.500 seconds.

“At the beginning today the Top Kart was loose. We got the tire pressure down and it handled better in the Final.  We worked around the first place kart and beat him on the last lap,” Canoles explained.  “I want to thank my sponsors CRP Racing, Top Kart USA, Ocasio Racing and Roger Myers he helped us out a lot this weekend.”

Myers, of Pittsburgh, PA, swept the Yamaha Senior offerings.  Piloting a PCR kart Myers earned both poles.  Saturday his fast time was 39.057 seconds. Sunday he picked up the pace a little with a 38.955 seconds lap.

“I was just following the guys in front of me,” Myers said after Sunday’s win. “The young kids were pretty quick today.  It was a lot of fun.  We got better all weekend and finished up strong.  I’d like to thank AKRA, Vega Tires, Adkins Speed Center and Checkered Motorsports.”

The Callahan, FL based father/son team of Joey and Brently Miller were double winners. Dad dominated IONIC Edge Chasses 206 Masters while Brently bagged both Boon & Sons Kid Kart races.  “The Razor chassis was a little bit slippery, but it handled good,” said eight-year-old Brently who added, “The track is fun.”

Joey Miller’s Mike Capp Racing Engines powered Razor kart was dialed in for Saturday’s qualifying.  Miller made the pole with a 40.804 seconds lap.  Brad Farmer was second fastest qualifier with a 41.145 seconds lap that was 0.341 seconds off pace. Timothy Clark cruised by Farmer for a second place finish in the Heat Race.  Farmer fought back in the feature trailing Miller by 0.341 seconds.  Clark crossed third again this time followed by Vernon Sparks and Kevin Medearis for the top five.

On Sunday, Miller struggled in qualifying.  His 41.226 seconds fast time earned him the inside row two starting spot from where he mounted his charge to the front.  He got to second place in the Heat where he followed pole winner Clark (40.915 seconds) by 1.371 seconds.  Miller continued fighting in the Feature.  After a duel with outside pole winner Justin VanDerZee, Miller rallied on to the front taking the final flag with a 0.149 seconds advantage over VanDerZee.  Clark crossed third followed by Medearis and Farmer for the top five. 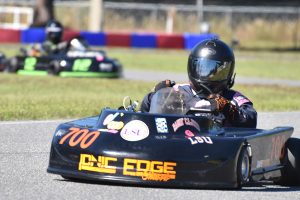 Baton Rouge, LA based GT Machine powered IONIC Edge kart pilot Macon Moore swept the Briggs Racing 206 Junior offerings from their poles he earned with lap times of 40.261 and 40.261 seconds.  Ryan Rogers recorded both outside pole time with laps of 40.938 and 40.642 seconds that were 0.317 and 0.381 seconds slower.

“I just pulled out into first place and went into the turn at the top going pretty fast and stayed in first place from there,” the double winner said of his second feature win. “The IONIC Edge handled awesome.  It was a little loose, but it pulled through for me. I want to thank my dad and Kyle Luttrell for helping us with the kart setup.”

Moore won Saturday’s Heat Race with a 0.308 seconds edge over Rogers and was a comfortable 3.909 seconds ahead of Rogers in the Feature.  Alex Sullivan and TJ Tomkunas trailed Rogers in third and fourth.

Sunday Moore beat Hunter Fox by 0.306 seconds and completed the sweep with a 0.192 seconds advantage over Rogers in the Feature.  Fox and Sullivan followed across the stripe.

“The Razor kart was good. It pushed a little, but overall it felt real good,” Hall said.
“In the Heat race it didn’t have a lot of power, but in the Feature we got it running. I want to thank Stevie Roberts of Roberts Kart Shop for the motor.”

Carter was Sunday’s pole winner with a 40.937 seconds run. Skaggs was just 0.016 seconds slower at 40.953 seconds for the outside pole, but when the Heat Race’s final flag waved it would be for Carter who was 0.115 seconds faster than Skaggs.  Skaggs avenged himself in the Feature beating him to the stripe by 0.257 seconds.

“The kart handled good and the motor was fast. I fell into second at first and then I bump drafted him.  I was too impatient to pass him at first so I stayed on him until the white flag,” Skaggs described.  “Then when we came down the long straightaway for the white flag I passed him on the outside.”

Jason Yarbrough and Tyler Smith won the weekend’s largest fields TSRacing.com 206 Senior Heavy.   Warren won both poles.  He earned Saturday’s with a 40.008 seconds trip and Sundays with a faster time of 39.848 seconds. Tyler Smith topped Saturday’s heat race finishing 0.123 seconds ahead of Aren Smith.  The Feature was a hard fought 14-lap battle.  In the final laps Yarbrough broke from the front pack and built a 1.501seconds finish line advantage over Smith.  Close behind in the top five were Corey Towles, Smith and T. Evan Cowen.

Smith, Piloting a Roberts Kart Shop powered Razor Chassis, won Sunday’s Heat and Feature races with Warren in tow both times.  Warren was 0.135 seconds late in the Heat Race and 0.123 seconds late in the feature where Smith, Matthew Mayes and Yarbrough completed the top five.

“I got a good push from behind me and luckily I just stayed out front the whole race until the checkered flag,” said the 18-year-old Waycross, GA based winner.  “I had a good race.  The Razor kart was smooth.  It was good the whole race, fast, very fast, really fast. I want to thank my dad for helping me all day.”