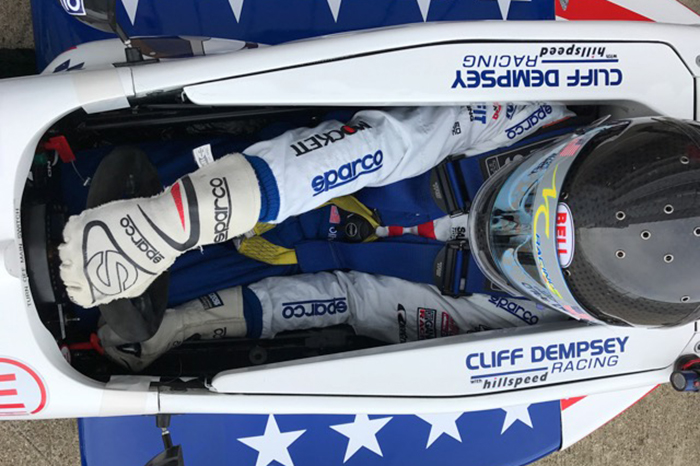 It’s almost time to go racing again! After a week of high-profile visits, Oliver Askew and Kyle Kirkwood are now back at Silverstone, deep into preparations for this weekend’s Walter Hayes Trophy at Silverstone…which has attracted more than 120 entries! Oliver’s latest blog is posted at http://teamusascholarship.org/?p=3680 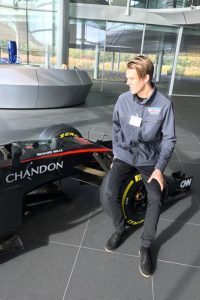 Our final week in England has begun, and even though it’s only been two weeks, it feels like I live here. I’m not complaining, I really like England, and Europe in general. We’ve spent a lot of time in London over the past few weeks; it is very cosmopolitan which is a nice change coming from the suburbs of Jupiter, Florida.

During our off-week we have been making a series of visits to prestigious race shops and manufacturing facilities. On Monday Kyle and I were taken on a tour of the McLaren headquarters by Neil Trundle (former chief mechanic for Ayrton Senna) organized by Jeremy Shaw. As soon as we walked through the doors it looked like a space station; everything was immaculate and almost all made of glass – truly a state-of-the-art facility. Neil has been working for McLaren for decades and has seen the company grow to what it is today, so the visit was very educational. The most fascinating part for me was when he took us through the section where they make all of their F1 components. The majority of parts are made in-house, and not many people get to see and experience something like that first hand so I will definitely remember that experience forever.

More recently, after another short train ride north, we made a stop at Ilmor Engineering in Northamptonshire. Among many other projects, Ilmor builds and tests engines for Chevy in the Verizon IndyCar series. Originally, they built engines for Mercedes AMG in Formula 1. Later on, Mercedes bought half of the company and now resides just across the street. Ilmor has also worked in NASCAR and Moto GP. After a detailed tour, I have much more of an appreciation for championship winning teams and how much work and engineering goes on behind the scenes.

We now find ourselves back at the pristine Silverstone International Circuit for this weekend’s Walter Hayes Trophy. Testing began yesterday (Wednesday). With slight contrast to the Formula Ford Festival, we are showing up here with loads of seat time and with previous experience at this track. As expected, we were half-a-second quicker our first session Wednesday morning than our testing here a few weeks ago. Cliff Dempsey and his team of mechanics have been working very hard during the off week to prepare these cars for another strenuous week filled with hard racing. I don’t expect anyone to drive away here; the straights are massive and anyone that is within three to four tenths can tag along in the draft. This will make the racing exciting to watch come the semi-finals and finals on Sunday. 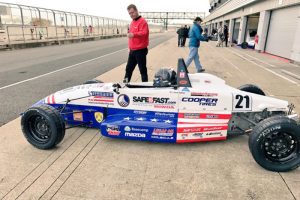 Last I heard, the entry count for this race is at 122, so we can expect very tight qualifying times and heat race results. Knowing how competitive this event will be, I will be working extremely hard throughout the free practice sessions with the CDR team to ensure we are at the top of our qualifying session and heat race. Once we make it into the semi-finals it will be a very quick game of chess. The drivers who make calculated decisions and think about the next lap rather than the next corner will finish in the front.

The race format for this weekend is very similar to the one at the Festival, although with more drivers there will be more heat racing. There are six qualifying and heat race groups, and I have been drawn in group six. To automatically advance to the semi-finals, drivers must finish in the top five of their respective heat race. Then the top half of the finishers in each semi-final will earn a place on the grid for the final. Practice has been going very well so far. The Team USA Scholarship cars are very fast and the Cliff Dempsey Racing team is working together very well. I look forward to our final race weekend here!

As always, thanks for reading,
Oliver