Maranello Kart Protagonist at the Trofeo Delle Industrie in Lonato 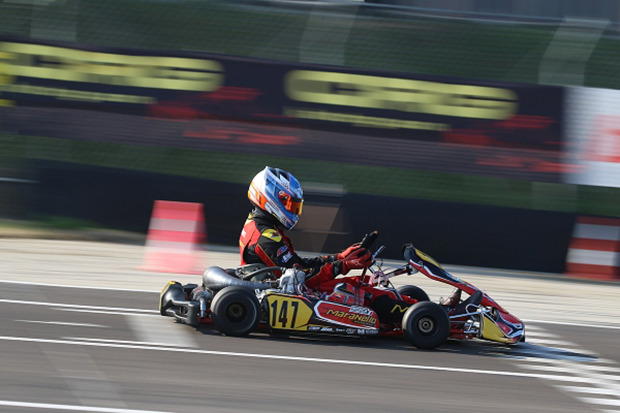 Tommaso Mosca has been the quickest of the lot in KZ2, but was penalized at the start of the Prefinal and managed to recoup up to P8 in the Final, closing ahead of Massimo Dante. Luca Bombardelli has been fighting for the top in Prodriver, but lost some ground due to an incident.

The 45th Trofeo delle Industrie held at South Garda Karting circuit of Lonato has highlighted once again the winning quality of Maranello Kart’s drivers and of the whole technical department. The team has been among the absolute protagonists of the event with Tommaso Mosca and Massimo Dante in KZ2 and with Luca Bombardelli in Prodriver Under, all on Maranello-Tm.

MOSCA AND DANTE AMONG THE QUICKEST

Massimo Mosca has started the Trofeo delle Industrie held on October 30th on a high, setting the pole position before keeping his momentum up in the heats, where he secured P1 thanks to two wins. Mosca expectations have been hit hard at the start of the Prefinal though. Maranello Kart’s driver got off from the pole position after three false starts due to some problems to other drivers. Mosca slightly jumped the fourth start and was issued a 10s time penalty. Nevertheless, the comeback of the Italian driver deserved a round of applause, as Mosca managed to climb from P15 to P8 posting the third fastest lap of the race, even though podium positions were out of reach. That was a real pity because Mosca could have achieved a lot more without that hiccup at the start of the Prefinal.

Massimo Dante has also run a good race, despite the 15th position in qualifying did not help him. During the heats Dante recovered up to P7, closed Prefinal in tenth place and the Final in ninth right in Mosca’s slipstream. He has shown once again a good level of competitiveness.

Among the other Maranello Kart’s drivers of KZ2, the Slovakian Martin Konopka of team K-Kart has been penalized by a bad qualifying. He recovered some of the lost ground in the heats but he just missed out on closing in the top 6 of the second chance race and therefore could not take part in the final stages.

Luca Bombardelli confirmed to be again among the protagonists of Prodriver Under on  Maranello-Tm. At the Trofeo delle Industrie he was unlucky in qualifying, as he slipped on the water leaked by the radiator of a rival in his quickest attempt. Despite this hiccup, Bombardelli put in a strong comeback in the heats before taking P2 in the Prefinal. In the Final, Bombardelli moved an attack to the leader at the second lap, but he made contact with his rival and virtually ended his race there. Rejoined last, he recovered up to P8 putting in very fast laps and taking the fastest lap of the race, which confirmed that his speed could have brought him high up in the final standings. Roberto Cesari was also on track in Prodriver Under and closed his effort in P11.

FEDERER AND BLUM IN 60 MINI

60 Mini had 72 drivers at the start, among these,  Yannick Federer – the younger brother of European Champion Fabian Federer and the Austrian Kiano Blum have been defending Maranello Kart’s colors. The two drivers could not get access to the Finals though, as Federer was 36th after heats and Blum 65th. Yannick Federer ended the second chance race in P18 and therefore could not qualify for the final.