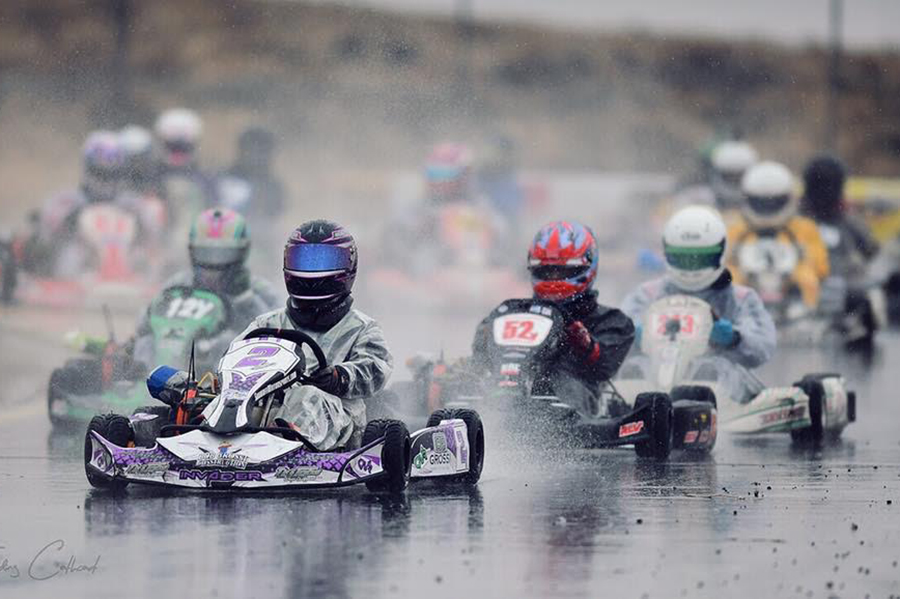 Northern Nevada Kart Club hosted the fifth and final round of the KPX Karting Championship in Reno, NV the weekend of October 16.  Going into the weekend racers and officials knew the rain was going to be a huge factor but all 79 karts were up to the task.  Sunday morning saw a wet track but clear skies with the track drying just in time for practice and qualifying.  Jr. 1 206 was the only class to race in the dry for their heat race with the remainder of the day racing in wet and cold conditions.

Eli Mays put down the fast time in qualifying and the heat win to lead the way for the Jr. 1 Lo206 group main.  Luck was not on Eli’s side for the wet and cold main while he was shuffled back with a charging Kai Sorensen and Aiden Kempf.  Sorensen was unmatched in the main and after his starting position of 3rd, moved up to 1st and never looked back taking home the win.  Boden Barnwell was able to move up to 3rd after his 8th place heat finish while having a hard fought race with Aiden Kempf.  Kempf’s 2nd place finish however gave him enough points to bring home the championship for the series.  Garrette Randolph Jr. brought home 2nd in the championship with his 4th finish in Reno and  Deano Pinten 3rd in the championship with his 5th place finish in the final round. 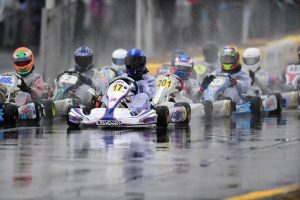 Jr. 2 206 was in a scramble as the rain started to come down just before their heat race and set the tone for the rest of the event.  Thomas Mejia was the big winner of the day with bringing home both the race win and KPX championship.  Hayden Wagner moved past pole winner Braden Benedix on lap 4 and settled into his 2nd place finish while Benedix held onto 3rd.  Wagner’s finish put him 3rd in the championship points while Wyatt Couch brought home 2nd in points.

Masters 206 brought in another solid 16 entries and again brought an action packed race.  Local Brandon Walsh grabbed the pole in the dry by it was Mat Kattanek who got P1 in the heat and carried the pace into turn 1 for the main event.  An incident in lap 1 however saw Kattanek drop down the order.  It was Jonathan Pinten who found speed for the main and charged from the rear of the field to 1st in a matter of a few laps.  Pinten set a face pace and put a gap between him and the rest of the field while  Kevin Straw , Joe Senna and Bob Snow were left to battle for the podium.   Joe Senna secured the KPX Championship with his 2nd place finish in the main while Kevin Straw rounded out in 3rd for the championship.  Mat Kattanek was still able to bring home 2nd in the championship with his final finish in Reno.

7 World Formula karts came out to Reno for the final round with their strongest showing.  We hope to see World Formula continue to grow for 2017 with this class offering more speed and power than the 206 package.  Despite some off track excursions Steven Taylor was able to bring home yet another win and secure the KPX Championship.  Rich Huston finished P2 in both the main event and in the Championship while Simon Whitworth came in P3 for the main and Dennis Holms taking P2 for the Championship points. 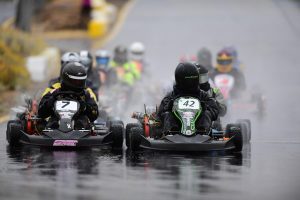 25 Lo206 Seniors rounded out the final round of the KPX Championship Series for 2016.  Harrison Mills laid down the fastest lap time in qualifying along with a commanding lead in the heat race.  In the main though it was Blake Milton who had moved his way up from his 12th place qualifying position to challenge Mills for the lead in the main.  Milton moved passed 2nd place Taylor Young at the start then set his sights on Mills, passing him on lap 11. Harrison Mills held onto 2nd while Taylor Young rounded out the top 3. The top Championship finishers used their speed and consistency in the previous rounds to secure their positions.  2016 Senior 206 Champion is David Vasquez, Kenny Manchester 2nd and Geoff Shaw 3rd.

KPX Karting Championship wants to thank the 160 unique racers and their families, 2016 Sponsors, Mad Dog Motorsports, Cole Nelson Racing, Nevada Kart Sport, KPX Host Tracks and all of those involved in growing karting on the west coast.  Briggs Racing, Evinco Tires and KPX will kick off the  2017 season with the largest Briggs racing event on the West Coast at the KPX Super Regional race in Redding, CA on March 18-19.  More information will be released in the coming weeks on www.KPXracing.com