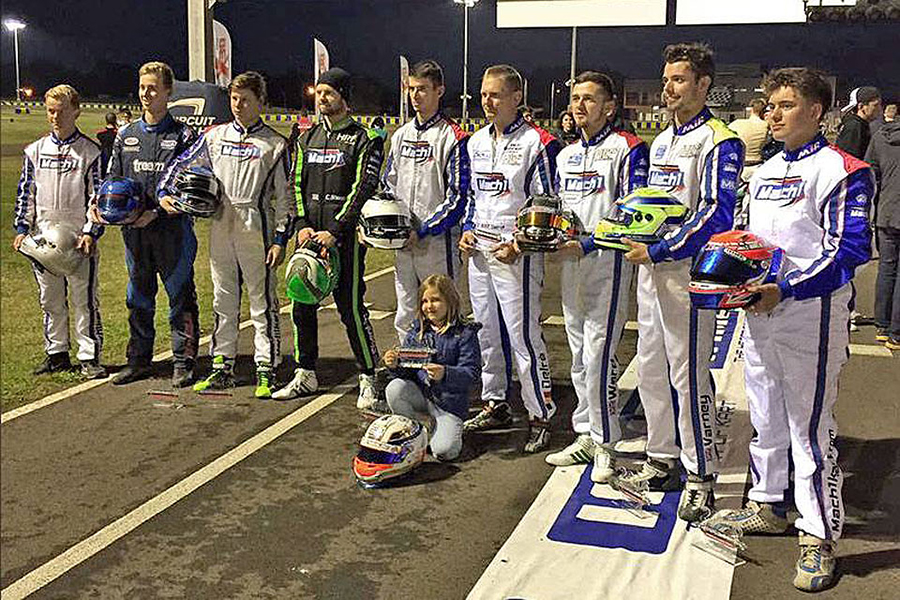 More than 400 drivers from all over the world started at the IAME International Final in French Le Mans. German chassis manufacturer Mach1 started with multiple drivers and belonged to the favorites.

Thierry Delre started at the X30 Super Shifter. The champion of 2012 and 2013 had aimed for his third success. With mixed weather conditions, he didn’t catch a free lap during qualifying though and had to be content with the 11th position. He then highlighted his performance during the heats and drove forward to second place. From the first starting row he then didn’t risk a lot during the pre-finale and stayed close to the front on third place. During the final, the Belgian fought for the big victory. Unfortunately he didn’t manage a good start and therefore fell back a little. He was then able to fight his way forward to the strong fourth place again until the end of the race.

Victorien Sabotava started at the shifterkarts as well. After a lot of bad luck during qualifying he was last of the top-class field of participants. During the course of the heats he fought his way forward to 14th place though and came close to the top ten during the finale. In the end, a time penalty threw him back though and he was only ranked 18th.

The English team MLC Motorsport sent multiple drivers to start at the X30 Senior. Brett Ward showed a strong performance. He finished qualifying of the fully manned class on fifth place. Due to a time penalty and a falling out he fell back to 18th place during the heats though. The finals didn’t go as hoped either. Numerous collisions caused a premature end. His team mate Ollie Varney crossed the finish line. He also had a good starting position due to being fourth of his qualifying group and he knew how to use this. Just like Ward he entered the final races. During the pre-finale he gained a couple of positions again and fully attacked during the final race. Problems with his racing tires made him fight with dull weapons though. He ended up on the disappointing 17th place on the overall list of rankings.

Norwegian Havard Hallerud (HP Motorsport) didn’t catch a perfect qualifying at the seniors. On 76th place, he stayed far behind his expectations. But instead of giving up he fought his way forward to the overall 46th place. Thereby he entered the B-finale and finished this on tenth place.

Luke van Heerwarde and Davey Shepperd also started at the seniors. Both of them weren’t able to find their rhythms though and stayed behind their usual performances. While Luke missed entering the C-finale, Davey started there. Unfortunately the race ended for him after six laps due to a technical defect.

Craig Shenton (Mach1 UAE) started at the X30 Master as a soloist. It was the first race on the challenging track for him and he got faster race by race. His commitment was rewarded by 22nd place at qualifying. During the heats he then experienced something entirely new. For the first time Craig started on a wet track and had to get used to it. On Saturday he then entered the B-finale on fourth place. After the best time during warm-up he was very confident but a defective ignition system stopped him in the end.

The races went less well for the four juniors William Pedersen, Jay Khoury, Marven Dinar and Rashed Ghanem. All four started in Le Mans for the first time and collected lots of experiences. Rashed Ghanem was the best youngster on Sunday by ending up on eighth place at the C-finale. William Pedersen followed on 18th place.

In the end, team leader Martin Hetschel was content with his drivers’ performances and also the performance of the Mach1-chassis: “We highlighted the possibilities of our material. Thierry was very close to the top at the shifterkarts and the seniors also fought for the overall victory. At such a huge event everything has to work out right in the end to achieve success.”