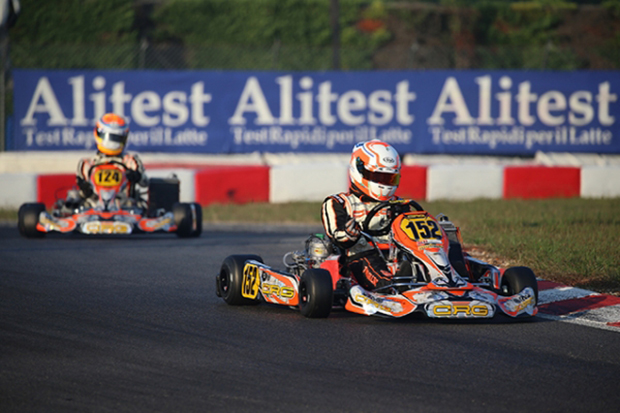 Torsellini and CRG have been among the most competitive lineups at the 45th Trofeo delle Industrie in KZ2. Dalè also on the podium in P3 as Federer followed in fourth. CRG competitive also in 60 Mini and OK Junior. Tonoli dominated Prodriver Over.

Mirko Torsellini had a good debut with CRG works team, as he scored a podium in KZ2 at the comeback with the Italian outfit at the 45th Trofeo delle Industrie, race run during the weekend of October 30th at the South Garda Karting circuit of Lonato.

The Italian driver has been competitive since the beginning on CRG-Tm. Out of the 68 drivers entered in the traditional event organized by Parma Motorsport, he was second in his qualifying group and in the heats – where he ended fourth before pushing hard in Prefinal ending second. Torsellini has been very quick also in the Final. Always following the winner Riccardo Longhi, he posted the same fastest time but could never find the right gap to pass him.

Torsellini ended therefore second at the flag of the Final, closing his effort right in Longhi’s slipstream and ahead of another great racer, former European Champion Andrea Dalè, who ended a very competitive weekend with the third step of the podium on CRG-Tm.

Another CRG driver secured the fourth place: the new European Champion Fabian Federer, recovered well from a hiccup in one heat on CRG-Modena. Among the quickest CRG drivers, the young Dutch Max Tubben was tenth on CRG-Tm leading Giacomo Pollini on CRG-Maxter and Fabrizio Rosati on CRG-Modena.

A NUMEROUS SQUAD FOR CRG IN OK JUNIOR

OK Junior’s race has had a good presence of strong CRG drivers,  which confirmed the growth of the squad also in this category reserved to youngsters. The quickest of CRG lot was Mattia Michelotto who closed 14th in the Final, while Dan Skocdopole was 22nd, team Morsicani’s Leonardo Bizzotto was 27th, Lorenzo Ferrari 28th after the 12th place in Prefinal and Edoardo Maccari 34th, all on CRG-Parilla.

The Spanish driver of team Morsicani Ubertz Moar, the French Pierre-Louis Chovet, the German of RL-Competition Marius Zug, the other German Davids Trefilovs and  Matteo Nannini who was quite unlucky in this occasion, could not get access to the final stages due to a series of race episodes.

Category 60 Mini has been very competitive as usual, with 72 very young drivers at the start. Among the protagonists of the category, team Gamoto Racing’s drivers have been shining with the fifth place secured by Alfio Spina, the sixth of the Brazilian Gabriel Bortoleto and the seventh of the Spanish driver Josè Gomez, all on CRG-Tm. The Belgian driver Ean Eyckmans also put in a strong performance ending 19th after fighting with the front runners in qualifying, as did the Spaniard Tomas Pinto at the debut with Gamoto. The young Chinese Cenyu Han had to settle for P25 in this occasion.

The two Prodriver categories took part in this edition of the Trofeo delle Industrie. 2015 Italian Champion Andrea Tonoli dominated Prodiver Over on CRG-Tm. He won the Prefinal and the Final, after being on top in the heats and in qualifying. Paolo Castellan was seventh in Prodriver Under on CRG-Modena, while Vincenzo La Martina was 12th.