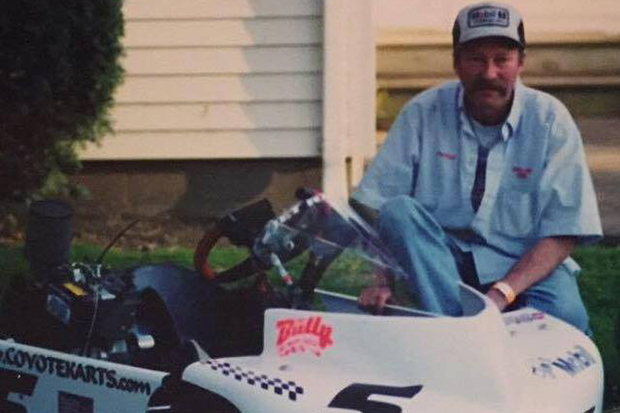 On Friday, October 28 the karting community lost a loyal racer, passionate karting father, and all-around enthusiast of the sport in Gary Wagenhals of Rochester, NY.  He was 55 years old.

Gary Wagenhals started racing karts in 1983 at the Genesee Valley Kart Club (GVKC) sprint track in Avon, NY. He was awarded Most Improved Driver at Avon in 1985 and later raced at the national level in the WKA Gold Cup and Manufacturers Cup series in both 2-cycle and 4-cycle competition and also had an opportunity to race at Watkins Glen International.  Nicknamed “Big Bird” at Avon after his bright yellow drivers suit, Wagenhals owned Team Breed Kart Shop where he built engines for himself and other racers for a time before retiring from the seat in 1993.

Gary returned to racing in 1996 when he purchased a microd car for his oldest son, Ben, to race at the Sodus Microd Club in upstate New York.  Gary would later head up Ben’s karting career in the Gold Cup and other series, and he’d return to the seat in 2004 to race for another five years with Ben.

Gary became involved in auto mechanics and motorsports at the age of 16. He met the love of his life, Kendall, at Avon’s GVKC in 1988 and the two would marry a year later.  Before joining Frontier Communications as a fleet mechanic in the mid ’90s, he worked at car dealerships, owned a gas station and kart shop, and also co-owned a tow truck company and did snow plowing for many years.

Coyote Motorsports’ Mark Lipari reflects on his friendship with Gary.

“After traveling to races with Gary, together we witnessed a common goal of ours which was the passion for racing.  He was knowledgeable about racing as well as general mechanics and he had done it all. He mentioned on several occasions that he was gifted with a great family. His wife being the baker and the person to research tasks and get great deals.

“Gary loved watching Ben race,” Lipari continued. “He wanted to attend every race and always wanted to be a part of tuning the karts.  Andrew being in college, Gary would comment that he enjoyed going to the college to visit Andrew and he was always impressed by his progress and achievements. Both of his boys were his pride and joy and he would do anything for them.”

If you wish to send a condolence card, please mail to Coyote Motorsports at 7 Turner Drive; Spencerport, NY 14559.

Coyote Motorsports salutes Gary Wagenhals on a great life and we thank him for his years of support of and enthusiasm for Team Coyote and the karting industry.  We’ll miss you Gary!