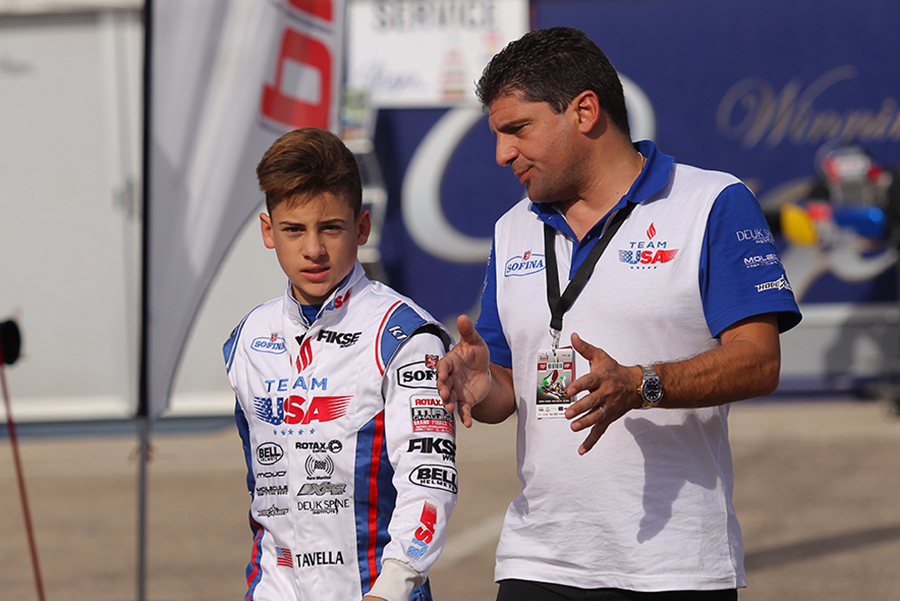 Dylan Tavella strolls the paddock as a member of Team USA at the Rotax Max Challenge Grand Finals in Italy last week, heads to
Las Vegas, Nevada for the final round of the US Open program (Photo: CKN)

Jet setting his way around the globe, New York resident Dylan Tavella heads to Sin City next week for the final round of the MAXSpeed Entertainment US Open. Taking place at the Rio All-Suite Hotel & Casino in Las Vegas, Nevada, Tavella will look to rebound from a difficult outing at the Rotax MAX Challenge Grand Finals in Sarno, Italy this past weekend.

“Sarno did not go as we had hoped but in racing, you have your good events and your bad events,” explained the three time US Rotax National Champion. “I had no luck at all in Italy but this kind of stuff happens, and I need to work hard to turn my luck around. This season has been great to date and I have had a lot of success in a variety of different series so I am planning to rebound and close the season out strong.”

Before competing at the SuperKarts! USA (SKUSA) SuperNationals, Dylan Tavella will participate in the US Open Finale as he will battle a stout field of Rotax Junior drivers. With championships and invites to the 2017 Rotax MAX Challenge Grand Finals at a yet to be announced location, there is a lot on the line in Las Vegas for the 2016 Grand National champion.

Tavella continued, “I am sixth in the championship chase but this event is worth more points than the previous events. My goal is to go out there and win every official session and let the points get calculated at the end. While the championship would be nice, it is a long shot for me so my focus will be on winning the race and ticket to join Team USA in 2017.”

Entering the event under the watchful eye of karting tuner and driver coach Mike Doty, Tavella will race under the Charlie Swayne owned Iron Rock Raceway outfit in his final Rotax event of the season. As a 2016 race winner in the Florida Winter Tour, US Open, SKUSA Pro Tour and the United States Pro Kart Series, Tavella is looking to add to his already impressive CV.