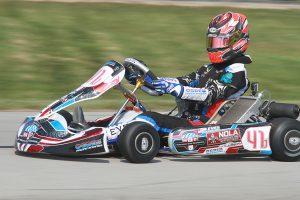 The 5 race national program that began on the beaches of Daytona in December, and ended at the tail end of summer in Indiana in September has come to a conclusion for 2016, as the WKA Bridgestone Manufacturers Cup Series enjoyed a major resurgence of national entries, not to mention stellar competition all season long. In the end, 8 national classes are going to be recognized December 27 at the Daytona Beach Resort on the shores of where it all started for 2016.

A memorable season, highlighted by one of the few female karting champions WKA has seen in its history, as well as a 2 class champion from Ohio who scorched the field on occasion, not to mention the fierce competition.

While there are many wonderful stories within the confines of the 2016 season, one of the best came from Pennsylvania driver Madison Campeau. The Championship winning effort was but one part of the story, as Campeau also found second place on occasion by mere inches at the stripe, yet not deterring the young driver from forging ahead, eventually getting to the front side of that battle of mere inches, thus taking the title in the Allison Racing Engines Yamaha Sportsman Class. Following an 11thplace finish on Day 1 at Daytona, Campeau rebounded big time for a 3rd place finish. GoPro Motorplex in Mooresville, North Carolina would be the beginning of the battle of inches, as Campeau was edged out by Robert Noaker III in a photo finish, followed by a 4th place finish on Day 2. The battle of inches followed Campeau to the July event at New Castle Motorsports Park, where this time Garrett Adams would be the victor, while again a second had to be settled for. A 5th place effort ensued on the second day. The turning point came on Campeau’s hometown turf in August at Pittsburgh International Race Complex, where the keystone state driver notched a win and runner-up finish, thus taking the battle for the title with Indiana’s Kaden Wharff back to New Castle in September. Campeau backed up her winning Pittsburgh performance, taking the win on Day #1, with a 5th place finish, thus securing her class title, becoming one of the few females in World Karting history to claim a national championship. Wharff wound up second in the overall standings, followed by Garrett Adams, Logan Adams, and Caleb Bacon. The remainder of the top 10 included Thomas Schrage, Robert Noaker III, Lucas Smalec, Nick Snell, and Nic Sheppard. 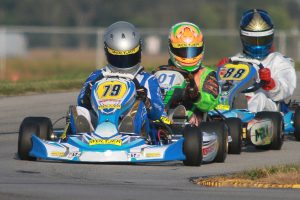 The series also found a 2-time champion this season in the form of Ohio’s Braden Eves, taking titles in the KartSport North America Pro IAME Senior and Fullerton Karts USA Yamaha Senior classes. Starting the season off, racing the likes of NASCAR Sprint Cup star AJ Allmendinger at Daytona, Eves mounted a 3rd and 9th place finish in the Pro IAME Senior ranks, while notching a 3rd and 4th in the Yamaha Senior class. Eves garnered a 3rd and 7th at GoPro in the IAME class, while also taking a 3rd and 10th in the Senior ranks. The wick was turned up big time at New Castle in July, as Eves cashed in with a sweep of wins for both classes on both days, as well as the overall weekend title, thus placing some distance between himself and his closest rivals, Brandon Lemke in Pro IAME Senior, and former champion Dakota Pesek in the Yamaha Senior ranks.   Eves headed to Pittsburgh for a 2nd and 4th in the IAME class, while taking another win and 2nd in the Yamaha Senior ranks. Eves returned to the scene of the New Castle July massacre, again scoring a win, and taking 3rd in the Pro IAME Senior class, while a 2nd and 6th was good enough for the Yamaha Senior title as well. In the end, Eves bested Lemke, Brandon Jarsocrak, Alexander Kardashian, and Jacob Donald for the top 5, with Jonathan Kotyk, Abbey McLaughlin, Nick Landi, Mick Gabriel, and Elliott Finlayson wrapped up the top 10 in Pro IAME Senior. The balance of the top 5 in Yamaha Senior were Pesek, Lemke, Landi, and Kardashian, with Derek Hughes, Jake Venberg, Brad Brittan, Killian Keaveny, and Patrick Healey rounding out the top 10.

Unlike the champions already mentioned, Jeremy Fletcher came right out of the gate smoking hot, with a sweep of the Daytona action in the CRPRacing.com Mini Swift class. Fletcher was also the weekends overall champion. After skipping the GoPro event, Fletcher returned to New Castle with a vengeance, taking a win and 2nd , again taking the weekends overall top honors. Pittsburgh provided more of the same, with Fletcher sweeping the weekends action, as well as his third overall weekend champion honors, then wrapped up the season at New Castle with a 2nd on the first race, thus ending an amazingly consistent and dominant season with the title in hand. Eli Trull came home second in the final standings, with Caleb Gafrarar, Danny Dyszelski, and Benjamin Maier making up the top 5. The balance of the top 10 were Sofia D’Arrigo, Sebastian NG, Thomas Annunziato, Elliot Cox, and Hoyt Mohr. 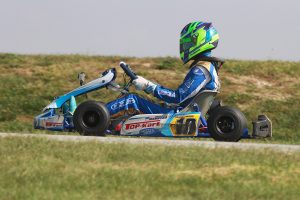 It’s hard to not win a title when your first name is Indy. And that’s exactly what Indy Ragan did, taking the Water for a Cause Kid Kart title this season. And if Daytona was any indication, Moms and Dads were in for a competitive treat, as Ragan and Ava Dutton took the wins, while Austin Olds 2nd and 3rd place runs nailed down the weekends overall title, providing a possible preview to one great season in the Kid Kart ranks. And that was indeed the case at GoPro with Tristan Young taking Day 1 activities, while Ragan took second on Day 2, and Ayrton Grim claimed the weekends overall top honors. Stop #3 at New Castle would see Ragan take a pair of runner-up finishes to Dusty Larson and Preveil Perkins, with Perkins the overall weekend champ. Ragan would rebound for a win and 2nd at Pittsburgh with Tristan Young checking in for win #2 on the season, while Ragan took the weekend overall title. The finale at New Castle found the swap between Ragan and Austin Olds, with both drivers sharing wins and respective runner-up finishes, with Olds taking his second overall weekend title for the year. The class saw a slight defection up to the Mini Swift class, due to birthdays for both Ava Dutton and Ayrton Grim, yet never lost sight of the competitive nature all season long, as Olds finished 2nd to Ragan in the points, with Karsyn Walters, Tristan Young, and Christopher Bowman completing the top 5. Top ten were made up of Aubrey Adams, Dusty Larson, Preveil Perkins, Ayrton Grim, and Ava Dutton.

The IAME USA East Pro Swift Sportsman Class again was one of the most exciting classes to watch all season, with Luca Mars taking down the 2016 title. Mars season began somewhat bittersweet, with a 4th and 20th, placing himself in an early season hole for the title. Success at GoPro was even harder to come by, as Mars mustered a 9th place finish as his best for the weekend. A 5th and 9th at the July New Castle event was an indication that things were slowly beginning to turn. And much like fellow keystone state rival Madison Campeau, Mars turned up the pressure by sweeping the Pittsburgh events in his home state, as well as the overall weekend title. Another win and runner-up finish in the season finale at New Castle clearly proved you can dig a hole for yourself, stay focused, and race through a very competitive field for the title, as Mars topped Kaden Wharff, Connor Ferris, Zane Maloney, and Rylee Engel for the top honors. Completing the top 10 were Madison Campeau, Caleb Bacon, Jason Welage, Annie Rhule, and Brent Crews. 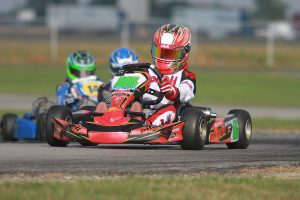 Final year end results for the Franklinkart.com Yamaha Junior and Woltjer Racing Engines Pro IAME Junior classes are still under review, and will be released shortly.

On the chassis front, Top Kart notched another season long win, totaling 17 victories, with Tony Kart a close second with 12 this season.  Benik had a good season with 9 wins, while FA finished 4th with 8 wins. Merlin and Praga rounded out the top 5 with 7 wins each.

WKA would like to congratulate all 2016 champions, top 10 recipients, and the balance of the many drivers who supported the 2016 season. Special thanks to so many include: Bridgestone, Comet Kart Sales, Checkered Motorsports, Sunoco, Tillotson, New Jersey Sprint Series, Water for a Cause, Allison Racing Engines, KartSport North America, FranklinKart.com, IAME USA East, CRPRacing.com, Woltjer Racing Engines, Fullerton Karts USA