Ninth round of 2016 program finishes at CalSpeed Karting Center 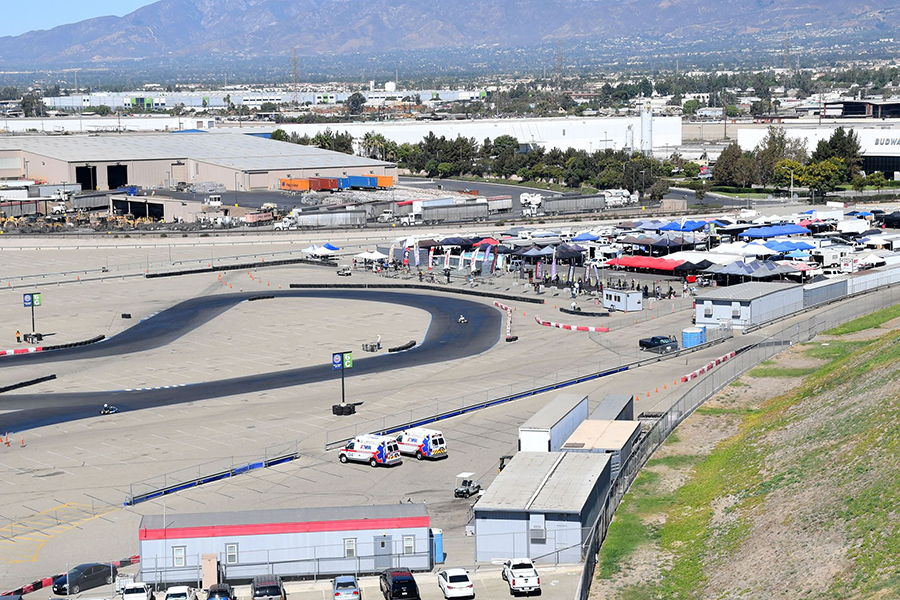 The 2016 season for the Los Angeles Karting Championship closed on October 16 at the CalSpeed Karting Center in Fontana, California. Competitors from across the western coast of the United States, and selected stars from as far as Florida and north as Oregon, contested the ninth and final round of the 2016 championship chase. The ‘Technico’ layout in the counter-clockwise direction was the challenge on the weekend with perfect weather conditions providing a great stage for a number of drivers to earn their first victory at LAKC, and others putting in the final nail on their title chase.

In the biggest classes of the day, two drivers invaded the SoCal area to steal victories. The P1 Engines Mini Swift division featured 21 drivers as Oregon driver Jonathan Portz securing victory in his LAKC debut. Championship leader Daniel Inzunza was fighting for every point possible. He first lost in qualifying to Anthony Willis and Portz, placing third. Inzunza came away with the win in the Prefinal, earning the pole position alongside Willis with Portz right there in third. The feature was a battle all the way through. Inzunza was leading when he retired on lap 12. That gave the lead to Portz, until Willis climbed his way back to the point with two laps remaining. Willis was able to cross the line first, however, was penalized for an off-track penalty. That gave the victory to Portz with Rylee Martinez promoted to second. Dominic Gorden completed the podium with Kasey Gillis fourth and Cole Keith Cotham in fifth, helping his case toward the championship. 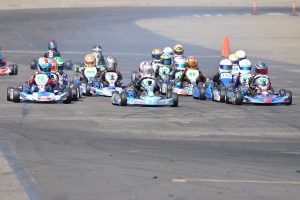 Florida driver Austin Garrison swept the 2 Wild Karting X30 Pro category ahead of 18 other drivers. Andrick Zeen, making his fourth start of the season, put up a fight for Garrison, as the two were the only drivers to lead on the day. Garrison secured fast time in qualifying, beat Zeen for the Prefinal win and then led 12 of the 18 laps in the main event en route to the victory. Zeen drove alone in second with Carlee Taylor helping her championship hopes with a third-place performance. Billy Musgrave worked up to fourth after a poor qualifying result with Michael Avansino in fifth.

Zoey Edenholm looked to have her first LAKC victory in her hands during the action of the Ryan Perry Motorsport X30 Junior class. She set fast time and drove away for the win in the Prefinal. Oliver Calvo had worked his way forward throughout the day and pressured Edenholm early in the Final. Lap seven, Calvo took over the lead with Edenholm hanging on. Calvo never relinquished the top spot, leading the remainder of the 18-lap race for his first LAKC victory of the season. Edenholm settled for runner-up, securing her fourth straight podium finish. Two-time winner Joseph Daniele ran third with three-time race winner Trey Brown in fourth while first-time LAKC driver Edward Portz rounded out the top-five.

In total, there were nine drivers earning a first victory at LAKC. Gianfranco Casadei already locked up the S4 title heading into the weekend, and gained his first CRG SoCal S2 Semi-Pro Stock Moto triumph. Casadei set fast time in qualifying before Aaron Aguirre edged him out for the Prefinal win. The two were the class of the field in the Final, with Casadei getting the edge at the checkered flag. Vivek Tandon drove to third ahead of championship leader Chandler Campbell with Carlee Taylor making her debut in the category, placing fifth. In just his third start, Sean Bond drove to victory in the PKS S4 Super Masters Stock Moto class. Championship leader Chris Curtis set the pace in qualifying, with Bond leading in the wheel-to-wheel action. Bond came away with the win in the Prefinal, and drove to victory in the Final by 3.8 seconds. Curtis finished second with Round Seven winner Larry Hayashigawa in third. 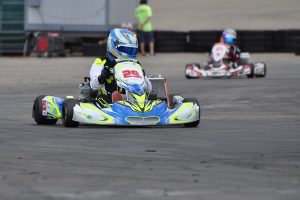 The 2Wild Karting X30 Intermediate category went down to the wire, and beyond to determine the finale winner. Aidan Yoder set fast time in qualifying and led green-to-checkered in the Prefinal. Yoder led the first six laps of the main event until he was shuffled back. Michel Manning led, as did Joey Paonessa until Gino Alfonso-Macauley took over the point. He led the remainder of the race to take the checkered flag first, but was penalized one position post-race. That handed Alyssa Yauney the victory, her first at LAKC. Manning made it two female drivers on the podium with Paonessa and Yoder completing the top-five.

Just three drivers stood on top of the podium before the LAKC finale in the Mike Manning Karting TaG Master division. Travis Irving made it four for 2016, notching his first victory in the category. It was anyone’s race for the taking with Roy Steele leading the qualifying session with the top-five within two tenths of a second. Tim Meyer jumped to the lead on the opening lap of the Prefinal, pacing the field all 10 laps with the top-four finishing within seven tenths of each other. Three-time race winner Erik Jackson drove his way to the lead by lap three, showing the way for two circuits until Meyer retook the position. Meyer led the remainder of the race to reach the checkered flag first, however, was penalized to drop him out of the results. This gave Irving the victory, placing just ahead of Vatche Tatikian with Steele finishing third. Gary Lennon and Jonathan Silva finished fourth and fifth.

After four straight podium finishes, Jesus Vasquez Jr. won his first feature in the Empire Karts Micro Swift class. With just nine drivers in the category, it was a fight throughout the day. Logan Toke set fast time while Frankie Mossman emerged as the Prefinal winner. Mossman battled with AJ Matheson early until Matheson was shuffled back. That allowed Vasquez to move forward, with he and Mossman shuffling the lead in the final four laps. At the line, Vasquez took the checkered flag first for the victory with Mossman settling for second. Championship leader Cooper Hicks drove to third with Matheson up to fourth and Tuesday Calderwood placing fifth. 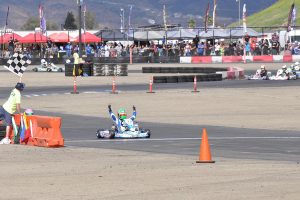 The last first-time winner of 2016 was Kasey Gillis going from zero to hero in the Fleming Racing Engines Junior 1 Comer division. Gillis was unable to record a lap in qualifying, forced to start 14th in the Prefinal. Gillis drove up to fifth in 10 laps during the Prefinal, and completed the move forward in the Final. Gillis joined the lead group, working up to the top spot by lap three. From there, it was a battle with top qualifier Chance Gibson and Aiden Dodge. On the final lap, Gillis secured the lead and edged out Dodge by 46 thousandths of a second. Gibson settled for third with AJ Matheson fourth and Sheldon Andrews fifth.

Logan Ainsworth won his fifth feature of the season to clinch the championship in the freem Honda Kid Kart class. Ainsworth was one of a few drivers to sweep the day’s action, leading from qualifying, into the Prefinal and the final checkered flag. Drake Cardey put on pressure late in the race, placing runner-up just ahead of John Antonino. Logan Chambers was fourth while Brodey Vicars rounded out the top-five.

The win total can now be shown on two hands for Royal McKee, earning a sixth on the season in the Musgrave Racing Company S3 Novice Stock Moto division. McKee went untouched, driving to a five-second victory after earning the fast time in qualifying and the Prefinal win. Garrett McKelvie and Prescott Campbell joined him on the podium with Josh Sarchet in fourth and Adrian Yong placing fifth. 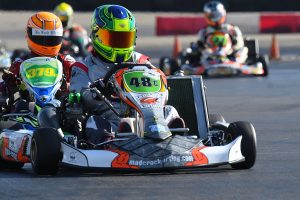 Gianfranco Casadei came away as the victory in S2 Semi-Pro (Photo: McDonell Media)

The Mack Motorsports PRD Junior 2 class was a battle to the end for the series finale. Point leader Ricco Shlaimoun set the fast time in qualifying while Round Seven victor Brenden DeLorto coming through in the Prefinal. The two swapped the top position seven times over the 18 laps of the Final before DeLorto secured the spot with four laps remaining. He held on at the checkered flag by 99 thousandths of a second. Lauran Adams joined them on the podium in third.

Alan Sciuto continued his SKUSA SuperNationals preparation with a third-straight victory in the Phil Giebler Racing Open 125 Shifter class. Sciuto swept the action, getting pressured throughout the day by point leader Slava Prikhodko. The gap was just over one tenth at the final checkered flag, with Sciuto landing the victory. Tyler Coffman drove to third.

The 2016 Los Angeles Karting Championship champions and other award winners on the season will receive their prizes at the year-end banquet, scheduled for November 6 at the Cal Aero Event Center in Chino, California. Click HERE to register for your tickets to the ceremony. For more about the Los Angeles Karting Championship program, please visit LAKC.org and ‘Like’ them on Facebook and follow on Instagram.