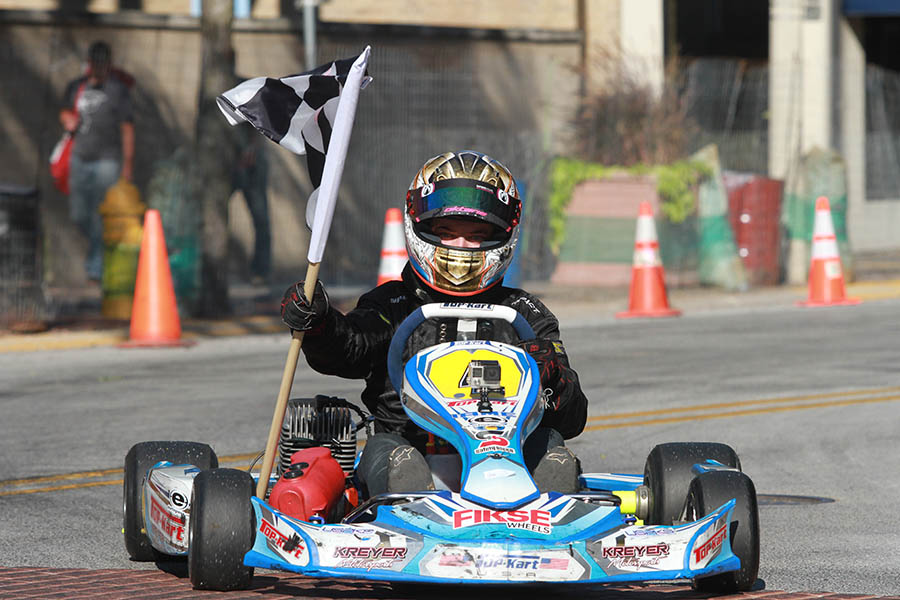 Karting, from the very beginning back in 1956, has been about getting together with friends and family, enjoy time together, and getting that fix for speed. That was the plan for Cal Stewart heading down Friday night toward the Quad Cities, riding along with Jesse Clossey and Josh Hotz to compete at the 2016 Rock Island Grand Prix. Getting down after the sun had set, the crew set up camp in the back of the paddock, blasting the tunes to put in the final preparations for the race weekend. 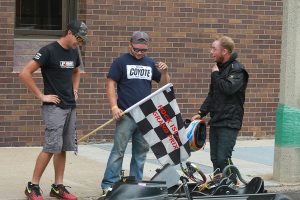 It was a memorable two days at the RIGP for Hotz, Clossey and Stewart (Photo: EKN)

Stewart was among the top drivers in the midwest the last few seasons, shifting his focus from hitting the apex to hitting the books. ‘Cowboy’ Cal is an engineer student at Northern Illinois University in DeKalb, about two hours east of the Quad Cities and about an hour south of his hometown of South Beloit, Illinois. The past two seasons Stewart has stepped out of the drivers seat, working as a tuner for Colton Ramsey in 2015 and with Top Kart USA throughout 2016.

For many, the Rock Island Grand Prix is that weekend where it’s just about getting behind the wheel and racing, while enjoying all of the antics that happen off the track. Stewart took the off-weekend from the busy schedule that was 2016 in the eastern half of the United States to jump back behind the wheel, racing a Coyote chassis of Clossey in the Briggs 206 class and a Top Kart chassis in the Yamaha division. The plan was to race three classes, until Saturday morning when friend Tim McMeekan paid to entered the third Briggs class to go along, making it four total with the Yamaha Medium category.

Stewart began with Briggs 206 Heavy in the ‘Even’ heat race. Cal started outside the top-10, making his way to fifth by the second lap. He was into the lead by lap five, going on to score the win over last year’s six-time Rock winner Tony Neilson. The Briggs 206 Medium race saw Cal start up front, leading eight of the 10 laps for his second victory. The third win of Saturday was a wire-to-wire triumph in Briggs 206 Heavy 2, pulling out to a eight-second advantage in just 10 laps. The Yamaha heat race was a great battle with Stewart leading two laps, only to end up placing fourth. It was discovered that evening that his engine was damaged during the race, and would have to make a change for the main event Sunday, putting him to the back of the 16-kart grid.

The work continued through the night, making sure both machines were ready for battle Sunday for the four main events. Racing began with a hard fought battle with Scott Kleman in the Briggs 206 Heavy main event. Stewart was able to lead all 15 laps, edging out Kleman by just 46 thousandths of a second at the line to earn his first ever Rock victory and trophy. Taking the weight off for the Briggs 206 Medium Final, former RIGP winner Mike Welsh joined the battle at the front to make for a three-driver fight. Stewart took the lead with four laps remaining, and knifing his way through lap traffic on the final lap, was able to secure the victory by six hundredths of a second.

Yamaha Medium was directly after that, with Stewart jumping from one kart to the other. Stewart borrowed the back-up engine of fellow competitors Tony Jump, and the two were the quickest karts on the streets. Cal came from last to first in a matter of four laps, working past Jump for the lead. Stewart never let up, pulling out to a four-second advantage while Jump held on to take second ahead of Neilson. With the success of that race, Stewart jumped out of tech, ran to the scoring trailer to lay down a credit card to enter the Yamaha Heavy 2 at the end of the day. 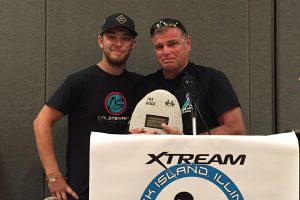 Before that, business was at hand in the Briggs 206 Heavy 2 main event. Cal was shuffled back to sixth at the start, and regained one position every lap to return back to the lead by lap six. He was pressured hard by Kleman once again with Matt Pewe in tow. The race ended three laps short due to a red flag, and unceremoniously, Stewart took his fourth main event victory of the day.

The fifth and final event put Cal back in the Top Kart, starting 18th in the Yamaha Heavy 2 main event. Morgan Schuler and Carter Pease led the lead pack, with Stewart able to reach the group in just a matter of a few laps. Cal picked off the drivers one-by-one, taking the lead on lap 12. Pease put on the pressure, but Stewart was determined and unstoppable on the day. The fifth checkered flag on the day gave Cal his fifth Rock trophy, helping to put his name into the record books.

As good as Stewart was on the city streets of Rock Island, he showed his true character off the track at the event banquet that Sunday evening. Cal excepted his first ever Rock trophy in the Briggs 206 Heavy category – was named the Travis DeVriendt Memorial – a former RIGP winner – to raise awareness and money toward the American Foundation for Suicide Prevention. Stewart presented the Rock to Ron DeVriendt – Travis’ father – with the room providing a standing ovation to both. Stewart also gave his Briggs 206 Heavy 2 Rock to Tim McMeekan – who paid for the entry fee to race the class Saturday morning. In total, Cowboy Cal left with five Rock trophies, moving him to 13th overall on the RIGP win list, and $2,100 in cash for his wins. 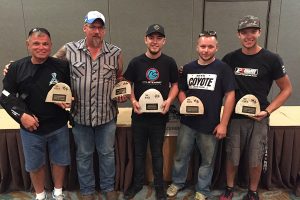 Chassis: Top Kart Twister / Coyote Widetrack GL
Engine/Engine Builder: IAME X30 (Woltjer), Yamaha (Switch), LO 206 (Turner)
Sponsors: Top Kart USA, Paulsen Specialties
Series You Compete In: None currently as I have not run a full series in over 2 years. Route 66 Sprint Series, USPKS, and WKA are series that I competed in.
Years Karting: 16
How did you get started in karting? I started out at a local track in Brodhead, WI called Sugar River Raceway. It was something my father decided to get us involved in after a split between himself and my mother. Starting in Kid Karts, we had slowly progressed into the “Box Stock Honda” classes. Which are comparable to the Briggs and Stratton Flat heads. Leaving the local track at age 11, we decided it was time to take the karting a little further, which is when we got hooked up with Stan and Lisa Guess of Express Karts and Parts. From there, we continued with the 2-Cycle karting running series such as Midwest Sprint Series, Route 66 Sprint Series, WKA, and USPKS.
What has been the high point in your racing career? A high point in my racing career would probably have to be winning my first National event down in Daytona in the TaG category for the WKA race in 2012 and again in 2014. Honestly, Rock Island Grand Prix this year ranked pretty darn close to those wins. RIGP was a special weekend for me for sure.
What are your goals in racing? My goals in racing have changed over the past few years. Like many young kids, all we think about is making it big. However, now that I am almost through college, I am really looking forward to being able to support my own racing. I haven’t spent a lot of time in the seat lately due to school and funding but overall, my goal is to get back to racing as soon as I can.
In a few words, how would you describe your driving style? Raw and Aggressive
Funniest moment at the race track?  Probably have to be when Bill McLaughlin and the Top Kart USA crew set up a table out in front of the hauler with the words “THE LEGEND, 5-Time RIGP winner, Cal Stewart autograph session” at Pitt. Along with 5 rocks that they found in the landscape somewhere. 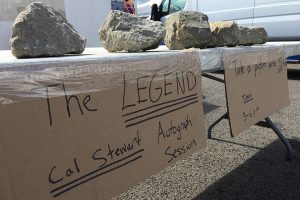 What do you do when not at the track? School takes up the majority of my time when I am not racing. However, I would say spending a day on the Harley, or at the Motocross track with the guys are a couple things you can find me doing if we are not at a race somewhere.
What are your goals outside of karting? Finish my Engineering degree in order to land a solid job, and be able to support a future family with the same racing addiction that I have!
What type of street car do you drive? 2004 Ford Ranger
What type of street car would you like to drive? 2009 Honda S2000 CR
What are your pet peeves or things that irritate you? Not listening. I cannot stand when people talk, just to talk. Although, I am guilty of it myself sometimes I’m sure.
What do you think could be done to improve the sport of karting? I truly feel the sport of karting is stretching itself too thin. The number of series we have, the cost for entry fees, and the amount of tires we have to purchase are things that could all be reduced. I do like that USPKS, and Route 66 have gone to a smaller class structure, allowing for more track time.
What are your favorite aspects about the sport of karting? My number one favorite aspect of karting would have to be the family aspect. At a young age, I didn’t realize how much karting has brought my family together, but the older I get the more I realize that karting has shaped my family and myself into who we are today. You can easily put a price on the time spent traveling, the tire bills, the engine rebuilds, that new chassis you just had to have, but you CANNOT put a price on the time spent with your family.