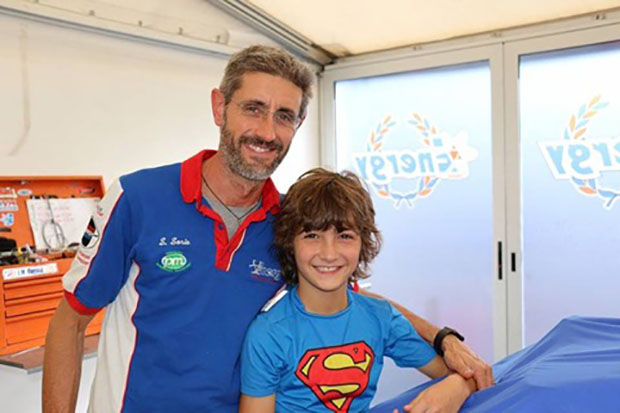 After narrowly missing the top step of the podium at the Vortex ROK Cup International Final last year in Lonato, Italy, eleven-year-old Jak Crawford is looking for the next step on the undisputed, biggest podium and race in the world for cadet level racing. Competing in the Vortex Mini ROK class and piloting an Energy chassis, the young American will look to claim the checkers on international soil as he is a member of Team USA through his Vortex Mini ROK championship at the 2016 Florida Winter Tour.

Last year the field included a who’s who list of over 130 kids from around the world, with the majority from the home country of Italy. As a recap for ROK Cup International 2015, recall that Jak missed qualifying on pole by a scant four one thousands to his Energy Corse teammate Mattia Michelotto. Jak showed it was no fluke all week by narrowly missing the main event victory by just over a couple tenths of a second to Leonardo Marseglia.

A win, in his first international racing event last year, was possibly in his grasp but the opportunity in the final corner came up so fast on the then ten-year-old who was in the hunt with two 13-year-old local Italians.

“I was so happy to be up there with Michelotto and Marseglia at the finish that I probably missed an opportunity to win in the last corner,” explained Crawford. “I learned a lesson about pushing hard for a big win like that but on the other hand I finished well where no one expected me to be, so I am very proud of my finish.”

With both Marseglia and Michelotto moving up to the junior ranks, Jak enters Lonato as the worldwide man to beat in the Mini ROK division at the famed South Garda Karting facility. There will certainly be other favorites and the youngest Americans are bringing a stacked field this year, much more than last year.

‘Jetpak’ Jak gave up his hard-earned Rotax Grand Finals ticket earned with Richard Hergink and Team Koene USA in the Rotax Mini Max class to avenge his ROK Cup 2015 glory with a dream team at Energy Corse. There was a scheduling problem as both events came up on the same October weekend.

Crawford continued, “I would have loved to be at both international events and I am a big fan of Rotax racing at MAXSpeed Entertainment events, but I had to make a decision and I chose Lonato to try and better the success that I have in 2015.”

“Simone is the most intense racing expert I have ever worked with and his work has included several F1 drivers, with JM Correa as his normal driver these days. I am very lucky to be with him again and all my success last year in Lonato is due to him,” says the humble Crawford.

Jak is finishing another great racing year in 2016 with more championship crowns in hand, but the racing gods have not always been kind to him in 2016 either, nor has his engine equipment been the class of the field in many events, particularly Rotax Mini Max. The ROK International Final is an opportunity to get back together with a world-class mechanic and on world-class equipment where he can show his immense racing acumen for such a young kid.

Jetpak thanks all the American karting fans for such a huge show of support for his amazing run in Italy last year as the highest finishing American driver at ROK Cup International and he hopes to light up social media all over again with a little more, good Italian luck. Jak would like to thank OMP, Palmetto MDR, Speedsportz Racing Park, and the Alan Rudolph Racing Academy.