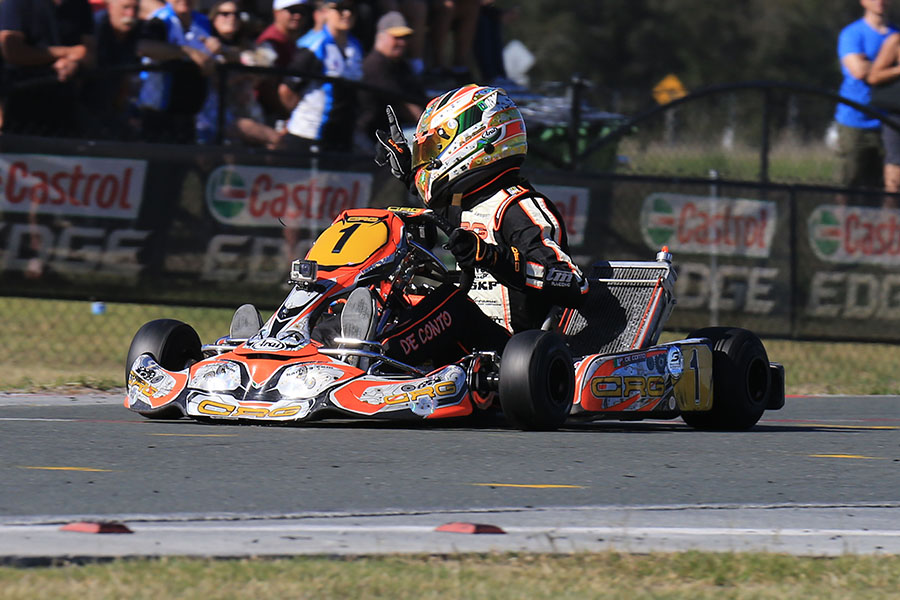 World Karting Champion Paolo De Conto continued his winning ways by taking out the Race of Stars powered by SuperFest at the Xtreme Karting Complex on the Gold Coast on Sunday afternoon.

In his first drive since winning the Title in Sweden last month, De Conto was clinical in what was arguably the best KZ2 race of all time in Australia.

The trio swapped the lead seemingly at will, pulling off some incredible moves right around the Xtreme Karting Complex on the Gold Coast.

All three led the race at some point and while they were doing that, 14-year-old Gold Coast KZ2 debutante, Tomas Gasperak closed the gap to the three superstars of karting and at the end of the race was well in the fight for a podium place.

In the end, Italian, De Conto made the decisive move on Kremers on the final lap, diving deeply a few corners from home to take the lead, much to the Dutchman’s chagrin. 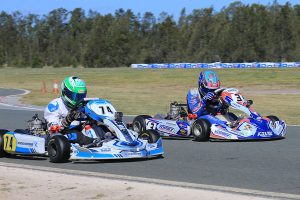 Jace Matthews and Broc Feeney side by side as they crossed the line in the KA2 final
(Pic: Coopers Photography)

“I’m really happy to have won.  This is my first race after winning the World Championship, so I really wanted to prove something,” said De Conto.

“The race was one of the hardest I’ve ever had.  We all had different issues which made for a very exciting race.

“The track was very fast, faster than the tracks we have in Europe.  It made for some great racing.

“I’ve really enjoyed my time here on the Gold Coast and look forward to coming back.  I’ve had a great time and would really like to spend more time here and have a holiday as well.”

Forè – who has won the last two Race of Stars had to be content with third, whilst his Maserati Brisbane Gold Kart team-mate Gasperak brought much acclaim from the huge crowd as the first Australian to come home in fourth.

In the lead junior category, KA2, it was Jace Matthews who took the biggest win of his career for Ricciardo Kart, leading home a determined Broc Feeney (Kosmic) and Harrison Hoey (CompKart).

Christian Pancione and Lachlan Hughes were also heavily in the fight which delivered some of the best racing from the class this season.

Australian Champion, Brendan Nelson walked away with the TaG 125 surfboard.

The Gold Coast-based driver had to fight hard for the win with former Junior star, Joshua Rogers really taking the fight up to the FA Kart driver.

Nelson in the end got the win and Rogers second whilst Marc Tulloch came home third.

Declan Matthews completed a good weekend for the Ricciardo team taking out the new KA3 Junior category. An unexpected victor, Matthews won by the barest of margins crossing the line mere millimetres in front of Reece Cohen. Oscar Priest was able to complete the podium, whilst Jace Matthews completed his good day finishing fourth. 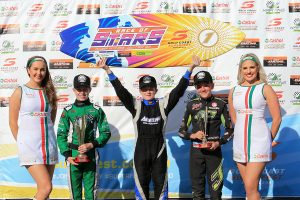 Another Declan of Harrington Doyle Racing Arrow Karts, Declan Fraser took out the KA3 Senior category. It was a typically epic KA3 Senior battle with any number of drivers in with a shot of victory. Fraser got the job done in narrowly beating home Thomas Fraser in the PIRTEK Arrow whilst Beck Connell completed the podium. She led at stages during the race and was looking likely for the win throughout various parts of the race.

Joshua Smith took out KA4 Junior after a great battle with Emerson Harvey. The pair skipped away from the field and were having their own fight. In the end the duo crossed the line comfortably in front of Jai Brown, who emerged in third position after a tough fight for the minors.

Adrian Haak took his EVO Kart to victory lane in the Cadet 12 category. A brilliant race yet again, Haak got the best of the opposition to take the biggest win of his career to date.

He led home a pair of South Australians in Blake Purdie, who led until the final corner, and Christian Cowie, both of whom had their own epic battle with a number of racers to complete the podium. Oscar Targett qualified on the pole for the final and was in the fight for the podium right up to the end aboard his JC Kart.

Thus brings the curtain down on yet another successful Race of Stars, powered by SuperFest, in the lead up to the Castrol Gold Coast 600 next week on the Gold Coast.

A huge crowd took advantage of the free-to-the-public event and were treated by the World’s best putting on a display of high level racing action.