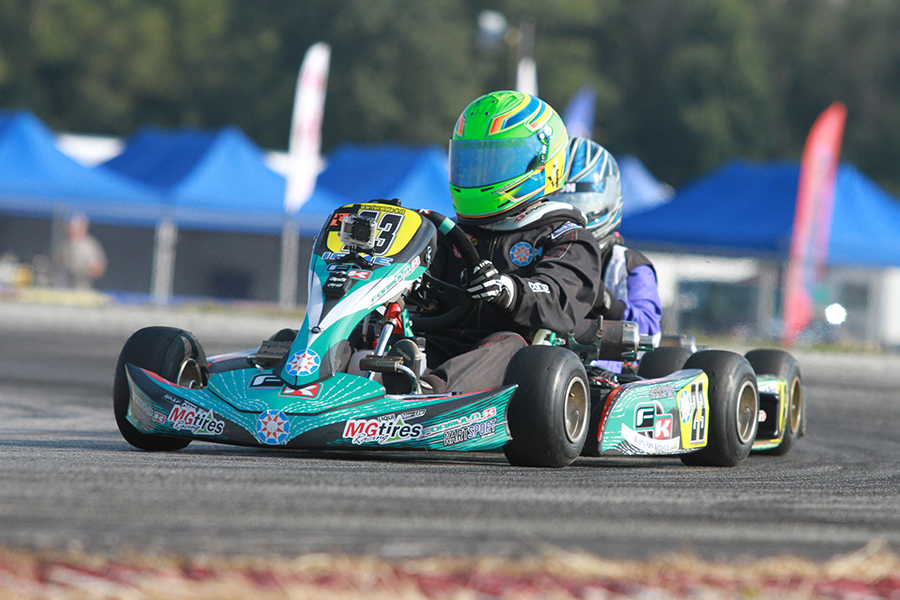 The 2016 karting season was the first year competing in the United States for Barbados’ native Zane Maloney. A family trip to Florida in December 2015 led to Maloney connecting with the KartSport North America operation, and a full season of racing with the team through a number of events. Since the age of four, Zane has been behind the wheel of a kart with no real kart track until last season when Bushy Park Barbados was repaved to include a kart circuit. The sport is set to begin growing on the island, with auto racing among the most popular sports in the country. Maloney, who just turned 13-years-old, has enjoyed a solid first season racing in the United States. 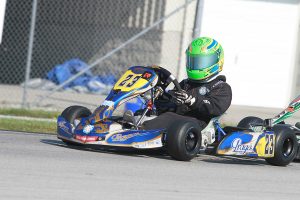 The season began by joining the KSNA operation at the WKA Daytona KartWeek event in December 2015. Competing in the Pro Swift Sportsman division, Maloney was quickest in qualifying both days to stamp his arrival in the United States. He would be shuffled back in the opening heat and fight back in the second moto. Unfortunately contact in the opening lap of the main event dropped him out of the race. Starting day two from the pole position, Maloney remained second through the two heat races before slipping to fourth in the main event, capping off a solid debut at the WKA Daytona KartWeek.

Maloney followed that up with his first WKA victory at the GoPro Motorplex. During the opening weekend of April, the Manufacturers Cup Series hosted its second event of the season. Zane qualified fifth, and drove his way to the win in both heat races. That was followed up with a wire-to-wire victory. The next day Maloney landed his second pole position in as many races, keeping toward the front of the field throughout the day, ending up third for a second podium finish on the weekend. The results gave Zane the over weekend winner status, earning a $500 payday.

At the end of April, Maloney made his way west to Phoenix, site of the 2016 Superkarts! USA SpringNationals for the SKUSA Pro Tour. Visiting the PKRA facility for the first time, against the top drivers in the country, Zane kept himself inside the top-10, placing 10th and seventh in the two main events. He followed that up with another solid weekend for the SKUSA Pro Tour SummerNationals in July at the New Castle Motorsports Park. While not as successful as Phoenix, the weekend ended with Maloney placing 10th and 11th. Those results have placed him sixth in the SKUSA Pro Tour championship standings, with the SKUSA SuperNationals 20 event in November the final round. 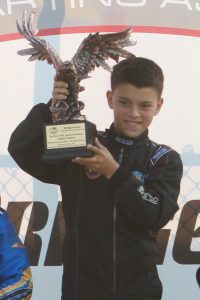 Throughout the summer, Maloney continued to compete on the WKA Manufacturers Cup Series and visited the United States Pro Kart Series as well. In June, Zane visited the US AIR Motorsports Raceway in Shawano, Wisconsin. Competing in both IAME Cadet and Yamaha Cadet divisions, he earned three top-five finishes in four races, including a runner-up in Yamaha competition.

The final stop for the WKA Manufacturers Cup Series brought the program to the New Castle Motorsports Park for a second time, serving as the 2016 Grand National event. Maloney was among the top contenders throughout the weekend in the Pro Swift Sportsman division. Saturday brought a heat race win, eventually fifth in the main event. Sunday, Zane fought back from a DNF in Heat #1 to end up seventh at the final checkered flag, helping to secure the fourth position in the championship.

Maloney ran double duty on the weekend, competing in the Yamaha Sportsman division. Day one brought an eighth place finish, with the pace improving on day two. Qualifying second, Maloney was shuffled back to 10th in the second heat. The Barbados driver never gave up, fighting his way forward to gain a position in each of the last eight laps. The final circuit, Zane took over the lead and was able to reach the checkered flag first by six hundredths of a second. The victory awarded Maloney his first WKA Grand National Eagle trophy.

The 2016 season is set to close for Maloney at the upcoming Superkarts! USA SuperNationals 20. Considered by many as the biggest and greatest karting events in the world, Zane will make his debut at the Las Vegas Convention Center on November 16-20, battling for a championship podium position in the Mini Swift division for his final Cadet-level event. 2017 will see Maloney making the jump up to the Junior age group, staying with the KartSport North America operation. For more on Zane Maloney, be sure to visit his Facebook page. To learn more about KartSport North America, click over to KartSportNA.com.