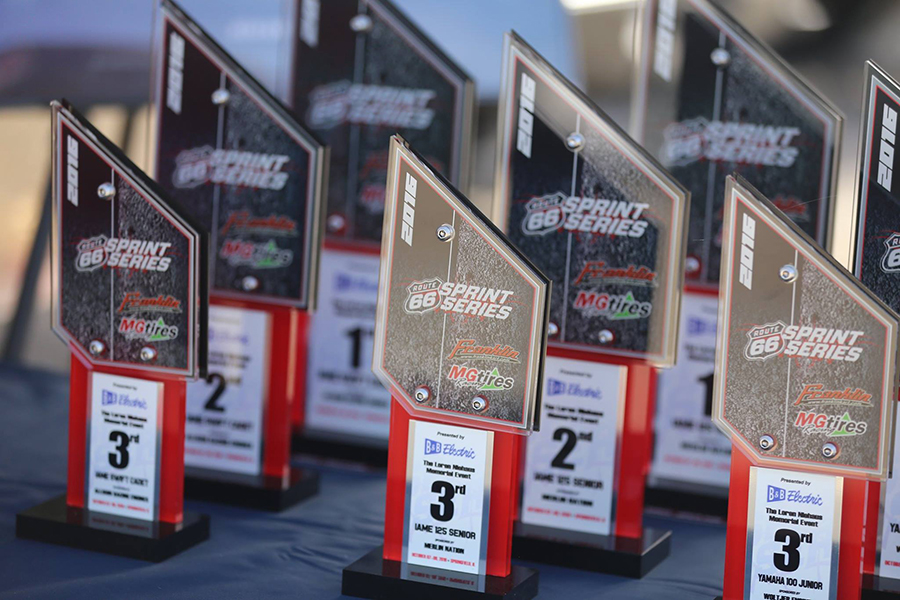 It was another picture perfect weekend for racing as the 2016 season for the Route 66 Sprint Series came to a close in Springfield, Illinois. The Mid-State Kart Club facility played host to Round Nine and Ten of the championship series, as nine title winners were decided of the two days of racing. Many of the titles were still up for grabs heading into the October 8-9 weekend, with a select few securing the championships early thanks to success on Saturday. Others went down to the wire with the last and final main event of the season deciding the last champions of 2016. 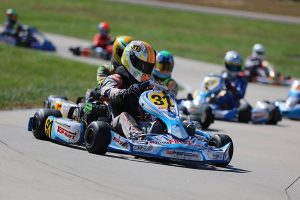 The RLV Yamaha Senior division continued as the largest group of the series, finishing off with 23 drivers at the finale weekend. It also marked the return of Nicky De Fronzo, playing spoiler by stealing a victory with Dakota Pesek clinching the championship. De Fronzo opened up the weekend with fast time in qualifying for Saturday’s action, before slipping back to fifth in a heated Prefinal that saw championship contender Adam Crepin earning the win. Crepin led early in the Final until Pesek took control, bringing De Fronzo with him. With two laps to go, De Fronzo jumped to the lead as Crepin followed through. Nicky held both title contenders at bay through the final corners, reaching the line first by 77 thousandths of a second ahead of Crepin and Pesek, as Dakota clinched the championship. Brad Brittin and Jake Venberg completed the top-five. Also returning was Tim Goettsch, a long-time karter stealing the pole position on Sunday. De Fronzo got the jump on the green flag, leading all 12 laps of the Prefinal while Goettsch slipped to fourth. Crepin took over the top spot two laps in the main event as De Fronzo and Pesek each retired early. It looked to be Crepin who would cruise to the victory, except Venberg made a late challenge. In the end, Crepin held on to secure second victory of the season, only by 54 thousandths at the checkered. Emily Hurlbert completed the podium with Josh Fierke fourth and Brant Carter fifth. 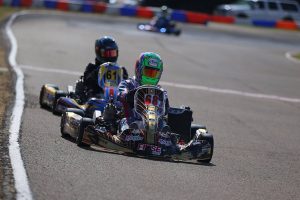 The Merlin Racing Karts IAME Senior championship was decided on Saturday with the sixth victory of the season for TJ Koyen. Saturday was a clean sweep, leading all 12 laps of the Prefinal and wire-to-wire in the 20-lap main event to clinch his second championship in two years, claiming the Yamaha crown a year ago. Armin Cavkusic finished second behind Koyen on track with title contender Josh Hotz in third. Joseph Budzinski and Aaron Bromberek completed the top-five. The weekend sweep was intact through qualifying and the Prefinal on Sunday for Koyen, leading all 12 laps of the heat race. Cavkusic got the advantage on Koyen at the drop of the green for the main event, and the two went back and forth in the final circuits. Cavkusic was able to secure the top spot through the last corner, holding on for his first victory of the season. Koyen drove to second, securing his 10th top-two finish with Hotz in third once again. Budzinski and Brad Brittin made up the top-five.
It was a perfect score in the Kart Craft IAME Junior class for Alex Bertagnoli, never relinquishing the top position. Bertagnoli led every lap of every on-track session, including fast lap honors in both Prefinal and Final on the weekend. Stephen Dial drove to runner-up finishes both days, earning a third straight event with that feat, to land himself the championship for 2016. Max Peichel and Spike Kohlbecker drove to third and fourth both days with James Lynch in fifth on Saturday and Michael Paterno holding the position Sunday. 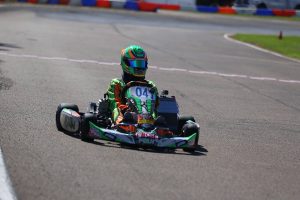 Two rookies scored their first victory in the Woltjer Racing Engines Yamaha Junior class – featuring 23 drivers – to close out the season. Tristan Farber came away with the victory on Saturday after fighting his way forward from a 12th-place qualifying effort. Moving up to ninth in the Prefinal, most of the work was done in the 20-lap Final. Four spot were made up in the opening circuit of the main event, and gradually inched his way toward the front of the field. He worked past Spike Kohlbecker on lap 16, leading the remaining circuits toward his first ever victory in the category. Jeremy Fierke drove to second with Kohlbecker dropping to third. Michael Paterno and Brian Rettig completed the top-five.

Championship contender Aidan Harrington set the tone Sunday, posting fast time in qualifying. Junior rookie James Lynch was a close second, and waited until the final circuit to steal the Prefinal win from the point leader. Harrington took the lead at the start of the main event, and once again Lynch sat on his bumper. It was another race to the checkered flag, with Lynch reaching the line by three thousandths of a second for his first class victory. While Harrington settled for second, it locked up his the championship in his rookie Junior season. Farber added another podium in third over Kohlbecker and Jack Dorsey. 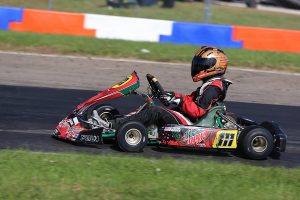 Four different drivers won the four separate Cadet Finals on the weekend. Kaden Wharff clinched the Allison Racing Engines IAME Swift Cadet championship with victory on Saturday. Logan Adams just edged out Wharff for the fast time in qualifying before Kaden won a great battle in the Prefinal. Wharff then went on to hold off Thome, and then Nicholas Terlecki for the victory to help secure the title. Terlecki came away with the second spot with Adams third, JJ Hansen fourth and Thome down to fifth. Sunday, Terlecki was the driver to edge out Wharff for the top spot in qualifying. Terlecki led 11 of 12 laps for the Prefinal win and then was joined by Thome and Taylor Maas in a great fight for the Final victory. Thome was able to cross the checkered flag first, only to be penalized for contact, placed behind Maas in the final classification. That promoted Keegan Bosch, who started seventh, to the top of the podium with his first victory of the season. Parker Abed was moved to second with Alex Grapsas in third. Maas was classified fourth to put Thome in fifth. 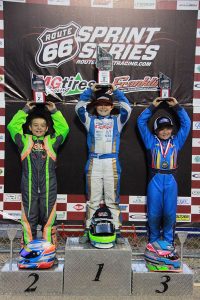 Kyle Thome and Logan Adams added to their win total for 2016 in the Switch Racing Engines Yamaha Cadet division. Thome was named the winner of Saturday main event after provisional winner Adams was removed from the results after tech inspection. The win was the second for Thome, who beat top qualifier Kaden Wharff to the line by 64 thousandths. Garrett Adams drove to third ahead of Nicholas Terlecki and Alex Grapsas. Adams bounced back Sunday to beat out Wharff for the victory, coming from fifth on the grid to beat the newly-crowned champion. Garrett Adams placed third once again as Terlecki and Thome completed the top-five.

Christian Miles and Elliot Cox went back and forth all season in the Express Karts & Parts IAME Swift Rookie category. The finale was no different as each swept one of the two rounds in Springfield. Cox struck first, controlling Saturday’s action to come away with a 1.895-second victory over Miles. Evan Zarbo was third with Jacob Ewing and Ava Dutton making up the top-five. Sunday was Miles turn, leading every lap through the Prefinal and Final for his fifth victory of the season to secure the series championship. Cox drove a close second in the race, with Ewing joining them on the podium. Zarbo finished fourth with Dane Sensel placing fifth.

Cox nearly swept the weekend in the Williams Racing Engines Yamaha Rookie category in his effort to earn the series championship. Saturday was a perfect score, leading every lap on-track toward a 9-second victory. Kasey Williams drove to second over Pierce Sonderup with Ava Dutton and Christian Miles capping off the top-five. Cox was on his way to another sweep Sunday after topping the qualifying chart and earning the Prefinal win. Williams put on a challenge in the main event, and the two swapped the lead seven times. This allowed Miles to close in late, making a last lap move to secure the lead and the victory, his first on the season. Williams crossed the line second, but was moved behind Cox for avoidable contact. That promoted Hunter Pruitt to the second spot, advancing Cox to third as Williams was now fourth. Dutton rounded out the top-five. 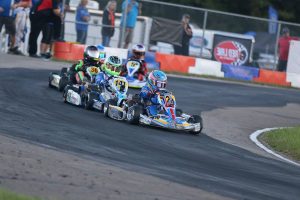 Indy Ragan capped off the Hollywood Crane Service Kid Kart championship performance with two more victories. Saturday was a close win over Prefinal winner Sarah Bradley. Cameron Brinkman was promoted to third after top qualifier and provisional third-place finisher Sean Dixon was removed from the results after tech inspection. That put Ethan Pogue to fourth and Dane Van Dyck in fifth. The seventh victory on the season for Ragan came Sunday, once again beating Bradley in the main event after she posted fast time in qualifying and won the Prefinal. Dixon drove to third position with Van Dyck and Pogue making up the top-five.

Five events are now completed and the nine class champions have been decided for the 2016 Route 66 Sprint Series. Those drivers, along with the qualifying competitors for year-end awards will be honored at the 2016 series banquet sponsored by Wings Etc. Collins Racing Team, MTEC and KartSport North America. The event is scheduled for December 3 at the Crowne Plaza Hotel and Resort in Springfield, Illinois. Those competitors and series supporters wishing to attend are asked to register online. For more about the Route 66 Sprint Series, please visit them online at route66kartracing.com and follow them on Facebook or contact Mark Coats via email mcoats.uspks@gmail.com.