The only true world championship in the sport of karting is the Rotax Max Challenge Grand Finals. For the past 16 years, competitors from around the world converge to one location to decide the top Rotax drivers for the year, with the only opportunity to compete is earning a chance or the ‘ticket’ to enter the event. With each passing year, the event has grown in prestige, featuring some of the best in the sport from over 40 countries around the world. For North America, the first chance drivers have the opportunity to win a ticket to the Rotax Grand Finals is through the Challenge of the Americas.

The Challenge of the Americas hosted its ninth season in 2016, competing during the winter months along the western coast of the United States. The international Rotax Max Challenge program hosted three events, welcoming the best drivers from all over North America fighting for a chance to win and earn tickets toward the ‘Olympics of Karting’. The season began in Tucson, Arizona at the Musselman Honda Circuit in January before moving north in February to the Phoenix Kart Racing Association. The series completed in April at the Simraceway Performance Karting Center in Sonoma, California. The 10th season is nearing as the calendar has turned over to the fall season, with information regarding the 2017 season can be found at rotaxchallenge.com.

2016 COTA series champions from Senior Max, Junior Max and Masters Max each earned a ticket to compete at the 2016 Rotax Max Challenge Grand Finals. This year’s event is set for the Circuito Internazionale Napoli in Sarno, Italy. This is the third time the country is hosting the world Rotax championships, the first for the Sarno facility. This year’s program is expanded, increasing from four categories to six to include the Mini and Micro Max divisions with selected few tickets available throughout the world this past season. Three chassis brands have partnered with Rotax to provide the spec karts for the event. Sodi Kart is the brand for Senior Max and DD2 Masters. Birel ART is providing the DD2 and Mini Max frames, with Praga supplying the rides for Junior Max and Micro Max.

One of the three 2016 Challenge of the Americas champions is making his Rotax Grand Finals debut, with the two others serving as veterans for the Team USA squad. 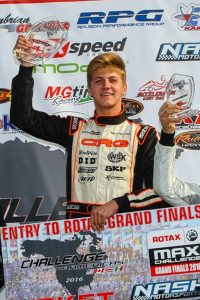 At the age of 16, Brooks is among the most experienced drivers in his age group. The California native began racing karts a decade ago, and started racking up the victories and podiums early on. Success on the national level began during his Mini Max career, earning the US Rotax Grand Nationals victory in 2011 at the Miller Motorsports Park (now Utah Motorsports Campus). He followed it up with his first Challenge of the Americas championship in 2012. Brooks moved into the Junior ranks and steadily became a front-runner. The 2013 COTA program saw Brooks earn two podium finishes in his Junior Max debut, continuing to improve throughout the season.

2014 brought his first victories in Junior Max at the Challenge, three of them, to help put him just three points short of the championship to now Mazda Prototype Lites competitor Austin Versteeg. Later in the season, he placed fifth at the US Rotax Grand Nationals and then sixth at the Pan American Challenge, missing out on the Rotax Grand Finals tickets at all three. In the closing weeks before the event, a ticket from the 2013 SKUSA SuperNationals opened up, and Brooks’ fifth place performance put him next in line, sending him to his first Rotax Grand Finals. Christian made the most of it during the rainy weekend in Spain, becoming one of two drivers to qualify for the main event, placing 29th.

At 14-years-old, Brooks made the move to the Senior level in 2015 and became an instant contender. Christian stood on the COTA podium five times in six races, including a victory. The championship was in hand, however, Brooks lost the title and the Rotax Grand Finals ticket by just four points. Christian was able to secure his second straight Rotax Grand Finals ticket, first in the Senior category, thanks to his performance at the US Open program. Brooks qualified once again for the main event during the world championship in Portugal, finishing 27th.

This year, Christian made sure the ticket to the Rotax Grand Finals was locked up early, dominating the Challenge of the Americas program in 2016. Brooks won four of the six rounds aboard his Nash Motorsportz CRG machine to earn the 2016 championship, and ticket to this year’s Rotax Grand Finals. Brooks has also made the progression into car racing, moving over to the Red Bull Global Rallycross Lites division, currently fifth in the series championship with the finale set for this weekend in Los Angeles. During the off weekends, Christian has kept busy with a karting schedule and is primed to contend in Italy.

“I am looking forward to The Rotax Grand Finals in Italy.  I am confident I will have the speed and consistency to make USA proud. I have learned a lot in the last two Rotax Grand Finals I’ve competed in.  I will be using that knowledge and skill to reach that top step of the podium!” 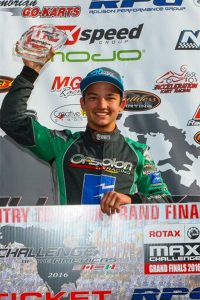 Making his first Rotax Grand Finals appearance, Nicholas Brueckner is among a talented group of drivers that make up Team USA Junior squad. The Texan has accumulated a number of wins and championships, and looking to make a mark on the world stage in his debut. Success came early for Bruckner, landing his first and so far only US Rotax Grand Nationals victory in the Micro Max division in 2012. The following year, Nicholas scored a Florida Winter Tour championship in the Mini Max division, before jumping up into the Junior ranks for the 2014 season. While showing some speed in his debut season at the Challenge of the Americas, Brueckner was not able to record any top-five finishes. He worked hard over the summer, and that catapulted his performance for the 2015 season. Nicholas scored two victories and three runner-up finishes, although came up short of the Challenge of the Americas title. At the same time, he also placed fourth in the Florida Winter Tour standings with one victory.

Missing the opportunities to clinch a Rotax Grand Finals ticket in 2015 drove the competitive fire within Brueckner entering 2016. A victory at the Florida Winter Tour finale put him just 67 points out of the championship. On the west coast, the Challenge of the Americas belonged to Nicholas. The first four rounds were sweeps, and a fifth straight victory opening up the series finale weekend in Sonoma locked up the championship and the Rotax Grand Finals ticket. Brueckner has been working hard training for the chance to represent Team USA, guided by Orsolon Racing’s Fabio Orsolon.

“I’m very excited for the opportunity to compete with Team USA at the Rotax Grand Finals, which was made possible by Challenge of the Americas race series.  Orsolon Racing and I worked really hard for this opportunity, and we’re working just as hard to be on top of the podium in Italy.” 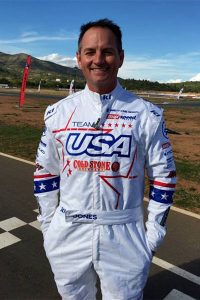 Experience is on the side of the entire Team USA DD2 Masters roster, including Challenge of the Americas champion Mike Jones. The Master Max title winner is no stranger to the Rotax Grand Finals, making his fourth appearance at the world championships. His first ticket came via the Pan American Challenge in 2012, traveling to Portugal as part of Team USA. He continued to get up to speed as the event went on, finishing a respectable 19th – two spots behind Alan Rudolph. The following year, it was a runner-up behind Rudolph at the US Rotax Grand Nationals that locked up the 2013 Rotax Grand Finals ticket, held at the NOLA Motorsports Park in New Orleans. Jones was a top-10 contender throughout the week, until contact in the main event dashed his hopes of a podium finish. The Texan got his first US Rotax Grand Nationals victory in 2014 in Tooele, Utah, earning his third straight ticket to the Rotax Grand Finals. The third time was not a charm, missing out on qualifying for the main event in the wet and rainy conditions.

Taking most of 2015 off behind the wheel to focus on the development of the Dallas Karting Complex / Sodi Kart USA racing team, Jones jumped back at it for the 2016 Challenge of the Americas in Masters Max. Jones came back from a mechanical issue Saturday in Tucson to place runner-up Sunday, positioning himself in the title chase. Two wins in Phoenix help put him at the top of the standings, and a runner-up result in Sonoma locked up his first series championship. Jones and the rest of the Team USA DD2 Masters roster are among the best in Masters competition here in North America, and are set to prove it once again at the Rotax Grand Finals.

“I certainly have enjoyed participating in the Challenge of the Americas races. Andy Seesemann puts on some fantastic races and they’re ran extremely well. I was fortunate to win this years championship thus gaining the ticket for the Rotax Grand Finals in Italy. This will be my fourth time to represent Team USA and I’m very honored to do so. I’m already looking forward to next years COTA races.”

In addition to the champions, five additional members of Team USA and five members of Team Canada competing at the 2016 Rotax Max Challenge Grand Finals have contested the Challenge of the Americas this season or in the past. This solid list of former series champions, former and current national champions and multi-time RMCGF competitors show how the Challenge is among the most competitive series in North America and around the world.

Karting enthusiasts can follow the progression of the Challenge of the Americas drivers along with the rest of the Team USA roster and Team Canada drivers as they battle drivers from around the world at the 2016 Rotax Grand Finals in Italy through the website rotax-kart.com. Live timing and live video will be available during the October 15-22 event at the Circuito Internazionale Napoli. More information on the rest of Team USA can be found HERE. Team Canada information can be found HERE. 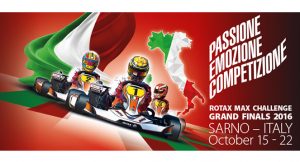