Maranello Kart Charging at the Autumn Trophy in Lonato 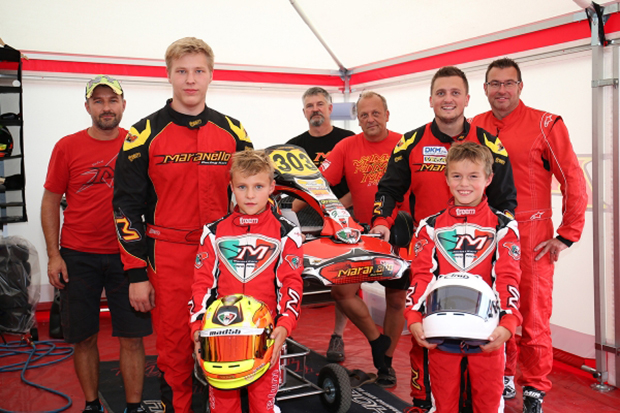 Massimo Dante claimed the second place of KZ2 in the first of the two rounds of the Trophy. Good run also for Christoph Hold. Luca Bombardelli secured the victory in Prodriver Under. Good performances also in the other categories. Sunday October 9th the Final.

The 26th Autumn Trophy of Lonato del Garda is once again in Maranello Kart’s target as all team’s driver have been busy trying to confirm themselves on top like in the recent years. The first of the two rounds of the 2016 Autumn Trophy has taken place at the South Garda Karting circuit on Sunday October 2nd and it already showed Maranello Kart’s potential to aim to a prestigious result in the closer scheduled for this coming Sunday.

In the highest category, KZ2, the exiting champion Massimo Dante has been shining in qualifying on Maranello-Tm, as he posted the second fastest time being only 62 thousands shy of the pole position time. After the Prefinal closed in P3, Dante recovered well in the Final ending second in the slipstream of the winner Bernardotto. The final challenge is for the weekend of 8-9 October, when  the classification will be defined as the sum of the results in the two rounds and the 2016 Autumn Trophy will be awarded.

The Austrian driver Christoph Hold, that has also been protagonist in the German DKM Championship this season ending fourth in KZ2 Cup, has run a strong performance in KZ2 with Maranello Kart. In Lonato Hold had unfortunately to retire from the Prefinal, but has been among the protagonists of the Final recovering from the back of the grid up to P11. The German Oliver Braun, also on Maranello-Tm, had a good weekend ending 16th in the Final.

Luca Bombardelli claimed the victory for Maranello Kart in Prodriver Under, after winning the title last year. Bombardelli has dominated this category once again, setting the fastest time in qualifying, and keeping his momentum taking the victory in Prefinal and Final. The other Maranello Kart’s drivers were hit by some bad luck instead. They were quick in practice but then relegated to the back of the pack, as in the case of Antonio Reguzzi, who ended the Prefinal in seventh place and the Final in fourth place, but was then pushed down to P15 by a 10s time penalty.

Maranello Kart’s drivers have been among the protagonists of the Prodriver Over since qualifying, with five drivers in the top 7 and top 3 locked out by three Maranello drivers: Jarno Giusti led in fact Fabio Danti by 10 thousands of a second and Cristian Griggio by 86, while Gianni Corti was fourth and Attilio Borghi seventh. Cristian Griggio was the fastest in the final stages as he ended Prefinal and Final in a great P2. Alongside him, two other Maranello Kart’s drivers secured a top ten finish: Attilio Borghi was fourth and Stefano Fiorato eighth at the end of a good comeback from qualifying’s P16.

Yannik Federer came to the fore in 60 Mini on Maranello-Tm run by SRP Racing Team. He was the fastest in qualifying, won the Prefinal and ended second in the Final, while the Austrian Kiano Blum ended the Final in fifth place due to a 3s time penalty.

Among the youngest, Pietro Ragone on Maranello-Vortex managed to end third in the Rok Mini Final out of the 40 drivers partaking in this category. In qualifying, Rangone has been shining posting the second time of his session, before being fifth in his heat and climbing up to the third step of the podium in the Final.

Davide Micheletti completed a strong run in 125 Club on Maranello-Tm, ending second in Prefinal and in Final.

The closing round of the Autumn Trophy is scheduled for the weekend of 8-9 October.