Kosmic Kart: Double Win of Basz and Milell at the WSK Final Cup 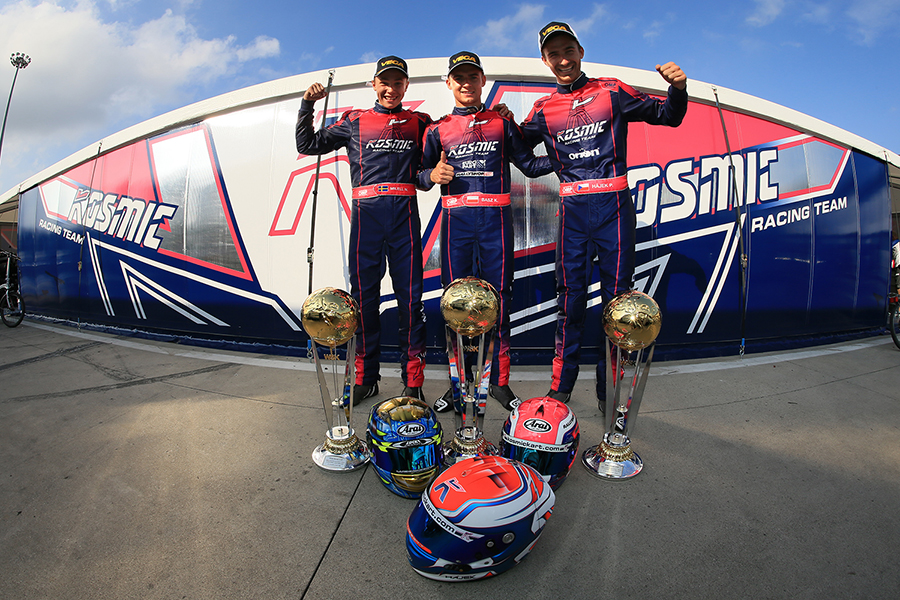 Positive final season in the WSK series for our colours. On the Italian Adria circuit our Racing Department has signed a peremptory double win in OK class, with Basz in first position and Milell second. In KZ2 Hajek got the with a second position and in OKJ category the winner was Martin’s Kosmic Kart (VDK team).

OK. The weekend on the Adria Karting Raceway began positively in OK class, with Karol Basz faster and better at the end of the heats, gaining two victories (out of three races).

In pre final Karol has given way to the young Novalak until the fifth lap but after recovering the leadership of the race he went straight to the top. Milell himself raced in the first positions in the pre-final, earning the third row in the final line-up.

Basz’s final was apparently monotonous, with the Racing Department’s driver able to take the lead, thanks to a perfect chassis with which he was perfectly tuned.

Milell struggled until half-race against his rivals and after taking the second place he managed to get closer to his teammate, performing a formidable finishing, Karol Basz-Noah Milell.

This great success is great in view of the World Championship race to be held in Bahrain in November.

KZ2. Hajek experienced an unlucky training for the final, in fact because of a penalty in the first heat (front bumper not correctly fixed at the end of the race), Patrick had to start sixth on the grid of the pre final.

In the pre-final our driver recovered and took the second place behind Ardigò, placement that Patrick also confirmed in the final, only driver who held the pace of the winner.

OKJ. In the wake of the extraordinary victory in the recent DKM, Théo Pourchaire won two heats and finished seventh in the prefinal-1, despite a penalty of three seconds.

The new-entry, with the Kosmic Kart-Vortex colours, Ulysse De Pauw gained the twelfth position in the prefinal.

In the final, our drivers Pourchaire, De Pauw and Weerts unfortunately got no glory and concluded, respectively, tenth, twelfth and twenty-eighth.

Winner was still a Kosmic Kart, the one led by the French Martins (VDK team).