The Fikes Wheels United States Pro Kart Series presented by MG Tires completed its fourth season with the finale event in September at the Pittsburgh International Race Complex. Four weekends in the 2016 season hosted eight championship rounds for the four IAME and four Yamaha divisions. The title chase welcomed eight new champions to each category, with the top-five in all the divisions recognized during the year-end awards ceremonies Sunday afternoon of the finale weekend (September 9-11). 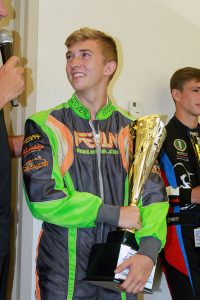 Each of the eight class champions was awarded the championship trophy, in addition to a USPKS Champion’s suit – designed by Oktane Visual – and ring along with a $500 USPKS gift certificate. The Yamaha champions received a free clutch from L&T Clutches while the IAME title winners received a free engine. The MG Tire Granja Viana 500 trip was replaced this year with $1000 and eight (8) sets of MG Tires from WR Motorsports. Vice-champions received a personalized jacket from WR Motorsports, along with a $750 USPKS gift certificate. Third-place finishers to fifth place were awarded a free entry and pit spot for the 2017 season. Third-place also took home a $50 PKT certificate while second through fourth took home an IAME gift package. All the top-five finishers received a set of MG Tires. KartLift raffled off a custom-built Pit Box, won by Brandon Lemke, with Marx Fireplaces and Lighting handing out over $7,500 worth of gas grills throughout the season, including three more at the banquet.

The FranklinKart.com IAME Pro division welcomed its fourth different champion in its fourth year. Brandon Lemke stood out at each of the four events as the driver beat, never finishing lower than second in the eight main events. The two-time 2015 Junior class champion secured his fifth victory of 2016 in the final round, including his third runner-up performance the day before. Lemke recorded an astonishing 658-point advantage after the final checkered flag of the season to claim the title. Only two drivers were able to take victories outside of Lemke, with Braden Eves notching two of his own. Those wins helped to put the Ohio driver second in the standings, just ahead of Round Three winner Zach Holden. Including Holden and Lemke, the two rookies finishing within the top-three of the championship standings is a new USPKS record. Brandon Jarsocrak went winless on the season, coming up just one point short of the third spot in the standings with four third-place results as his best finishes in 2016. Ryan Norberg scored more points in his second IAME Pro season, placing fifth in the final standings. 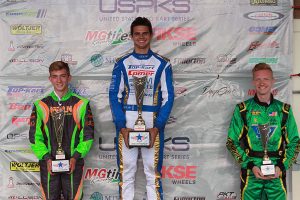 The last two seasons, Dakota Pesek has challenged for the Comet Racing Engines Yamaha Pro championship, placing third in 2014 and vice-champion in 2015. Pesek entered the series finale with the advantage, and capped off the year with a fifth victory of the season in the final race to secure his first USPKS title. Brandon Lemke and Zach Holden, two Senior rookies, kept him honest throughout the finale weekend. Lemke went winless in the category on the year after earning six of eight in Yamaha Junior a year ago. His five podiums in 2016 put him second in the standings ahead of Holden. The Indiana-native was the only driver to win in both IAME and Yamaha Pro on the season, earning two in Yamaha to finish third in the standings. Jake Venberg recorded his best finish of runner-up to help land him fourth in the standings as Jake McWhirter completed the year fifth in the championship chase.

For a second straight year, one driver collected both Junior titles at the United States Pro Kart Series. Alex Bertagnoli finished out the year earning the Innovative Performance IAME Junior championship and the Woltjer Racing Engines Yamaha Junior crown. Bertagnoli won three of the four IAME main events to open up the season and was able to hold on through the final weekend to claim the championship. Lance Fenderson made a late season charge, winning the last three feature races to move himself into the vice-champion position. Sam Mayer was the only other winner on the year, earning two victories to finish the year third in the standings. Austin Schaff ended the season with four podium finishes to help him into the fourth position in the title chase, while Myles Rowe capped off the championship podium. 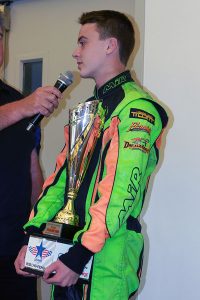 The chase was closer for the Yamaha title with Mayer as the driver to beat heading into the finale weekend. Bertagnoli was up to the challenge, recording finishes of third and second to clinch the championship. In total, Bertagnoli finished on all eight podiums with one win and two runner-up results to edge Mayer by 23 points. Mayer had more wins with two, however three finishes off the podium cost the former Cadet champion a second title in his USPKS career. Austin Schaff earned his first victory in the category in USPKS competition at the series finale, helping to secure the third spot in the championship. Aidan Harrington was another first time winner, scoring his first in Round 10 to lock up fourth in the standings, as Ben Varner ended up fifth on the year.

Allison Racing Engines IAME Swift went down to the wire with two drivers going back and forth. Reece Gold entered with a slim lead over Tyler Maxson. The two teammates secured the top two positions throughout the finale weekend. Maxson took the top honors on Saturday with a victory. The qualifying bonus at Round 10 was the difference after Gold secured the Prefinal win and Maxson landed his second straight victory. Gold was crowned the champion by 10 points, finishing the year with four victories and two runner-up results. Maxson came up just short, recording a total of six podium finishes. Round One winner Kyle Thome finished out the year in the third position with Colin Queen beating Nicholas Terlecki for the fourth spot in the standings. 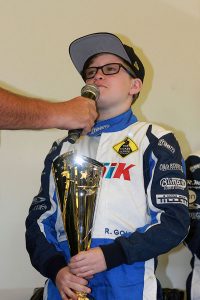 The 2016 season was the first full year for Garrett Adams in the Switch Racing Engines Yamaha Cadet category. Finishing on the podium in the first four rounds, Adams was hospitalized with an infection during the GoPro Motorplex weekend. His brother Logan substituted for him, performing at his best to earn a third and fourth place result over the weekend. That, in addition to the removal of Kaden Wharff due to unsportsmanlike conduct on the weekend promoted Garrett to the top of the championship standings. Adams recorded a sixth podium result in Pittsburgh to help the Mark Dismore-grandson to lock up his first USPKS championship. Wharff accepted his penalty and came back with a complete sweep of the Pittsburgh weekend to finish the year with six victories and the second spot in the standings. Round Eight winner Nicholas Terlecki ended up third ahead of Kyle Thome and Colin Queen.
Brent Crews dominated the season in the Jay Howard’s Motorsports Driver Development IAME Swift category. Crews won the first four rounds, notching two more in Round Eight and Nine to secure the championship. Paige Crawford recorded five podium finishes on the season to end up second in the standings behind Crews. Eli Trull and Danny Dyszelski were third and fourth with two-time winner Mateo Rubio-Luengo placing fifth on the year. 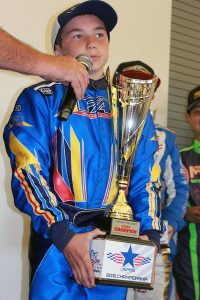 Details regarding the 2017 United States Pro Kart Series continue to evolve as the calendar faces the final three months of the year. More regarding the Fikse Wheels United States Pro Kart Series presented by MG Tires can be found online at www.USPKS.com and follow them on Facebook. Contact Mark Coats via e-mail mcoats.uspks@gmail.com or call 217-652-6275 to learn more about both programs.