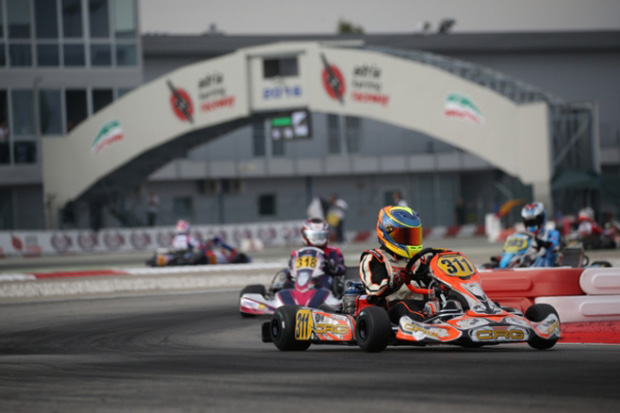 Several new protagonists have been on track with CRG in OK Junior at the WSK Final Cup held in Adria. Michelotto and Eteki have been among the quickest, alongside Hauger.  Joyner and Tonteri among the best of OK. CRG on the podium of Mini with Spina of Team Gamoto.

CRG works team has been present at the WSK Final Cup of Adria with several new young drivers in OK Junior, all talents ready to start a new professional path with the glorious Italian outfit that has secured a lot of international victories again this season in the World and European Championships.

The Italians Mattia Michelotto, Lorenzo Ferrari, Matteo Nannini and the French Adam Eteki made their debut with CRG in OK Junior, as the two young Germans Marius Zug and Valentino Fritsc that have already been active in DKM, and the Czech Dan Skocdopole.

The new DKM Champion Dennis Hauger was part of CRG works team of OK Junior in Adria. He has been shining despite some unlucky racing contacts. Hauger eventually has been the best of the lot and managed to finish the Final in seventh place from the 24th position on the grid, after the sixth time at the end of heats. Mattia Michelotto also run a strong race from the last place of the grid to the final P9. That was a great comeback run for both CRG drivers. Adam Eteki managed to find a place among the finalists ending with a good 22nd place.

All the other CRG drivers managed to take part in the final stages after heats, but their run ended in the Prefinals, where only 17 places in each Prefinal granted a position in the Final. Dan Skocdopole was 19th, Valentino Fritsch 21st, Lorenzo Ferrari 23rd, Matteo Nannini 25th, Marius Zug 27th, as the latter was penalized more than the others by some contacts after closing heats with an encouraging 26th place. It has been a very important experience for all these youngsters anyway and they will certainly capitalize on this experience in the next races and seasons. The OK Junior Final was won by Victor Martins.

JOYNER AND TONTERI AMONG THE BEST OF OK

CRG has fielded the other fresh DKM Champion Paavo Tonteri on CRG-Parilla in OK, as well as 2013 World Champion Tom Joyner on Zanardi-Parilla. These two drivers have been protagonist of OK, as they have been shining especially in the Final, after a series of unfortunate racing episodes in the heats. Tom Joyner has been the target of bad luck and had to retire in Prefinal, but put in a great comeback in the Final managing to get the final P5 thanks to a lot of overtaking and to the third fastest time of the race. Paavo Tonteri also had a positive race and managed to finish in the top ten in P8. Vittorio Mangili had to retire after an incident in Prefinal. The Final was won by Karol Basz.

MINI’S POLE POSITON TO CENYU AND PODIUM TO SPINA

CRG colors have been present on Adria’s podium thanks to 60 Mini and to the good third place secured by Alfio Spina on CRG-Tm run by team Gamoto. He followed Maya Weug and Kirill Smal at the chequred flag. Some other drivers of Team Gamoto were among the quickest of the category, as the Malaysian Adam Putera who ended seventh, the Chinese Han Cenyu tenth but author of a splendid pole position in qualifying and the Spanish Jose Gomez who was eleventh. The other Team Gamoto’s driver, the French Evann Mallet, could not get the podium due to an incident (without physical consequences) when he was close to cross the finish line.

Dino Chiesa, Team Principal CRG: “All our young drivers of OK Junior run good races. They obviously still have to grow, but this is going to be CRG squad for 2017. Hauger and Michelotto put in two remarkable comebacks in the Final, as they respectively recovered some staggering 17 and 25 positions. This has been another good showcase of our material. The only down side is that the circuit of Adria, due to its wide run-offs, allows for aggressive racing. I believe that race direction should be stricter and take firmer decisions. There have been way too many contacts in all categories. Now we will get ready to fight for the World Championship next November 19th in Bahrain. We will field 17 drivers there, let’s hope this is our lucky number…”