The Winners of the WSK Final Cup in Adria 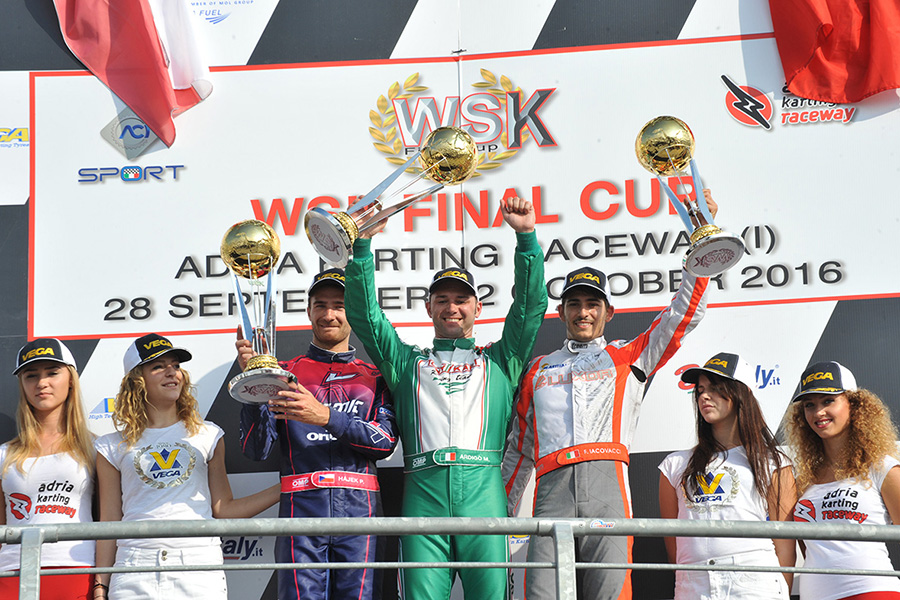 It was the grandstand finale that everybody was expecting. The WSK Final Cup of Adria didn’t fall short of expectations and the Adria Karting Raceway hosted a weekend to be remembered. WSK Promotion organised an event which attracted 176 drivers coming from 32 Countries and from 5 Continents. Impressive figures that affected positively the quality of the competition, rich of gripping moments especially during its last stage that, thanks to WSK Promotion, received the media coverage it deserved with the live streaming on the official website www.wsk.it. 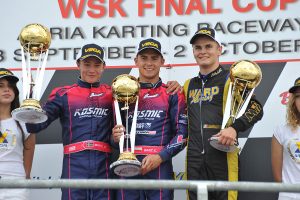 The Italian Marco Ardigò (Tony Kart-Vortex-Vega) left the best time in qualifying to his fellow countryman Francesco Iacovacci (Luxor-LKE), but then he cruised rather effortlessly towards the victory of the KZ2. The Czech Patrik Hajek (Kosmic-Vortex) was the runner-up despite a bad start. Iacovacci scored the last podium position at the end of a satisfactory weekend.

He arrived in Adria willing to succeed: the Polish Karol Basz (Kosmic-Vortex-Vega) managed to win the OK Final keeping at bay his team-mate, the Swedish Noah Milell. Milell managed to stay close to the leader after reaching the second position recovering the positions he lost at the start. Behind him the Italian Lorenzo Travisanutto (Tony Kart-Vortex) placed third thanks to a good recovery.

Martins celebrates his success in OKJ 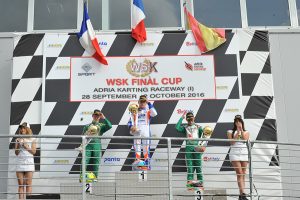 The French Victor Martins (Kosmic-Parilla-Vega) confirmed to be in excellent shape in OK Junior: nobody was able to beat him both in the heats and in the Pre-final. In the Final the real battle was behind him, for the remaining top positions: the Danish Noah Watt, the French Charles Milesi, the Spanish David Vidales (all on Tony Kart-Vortex) and the Moroccan Sami Taoufik (FA-Vortex) fought hard and exchanged positions until the finishing line. Eventually, Milesi and Vidales placed second and third behind Martins.

In 60 Mini the American Ugo Ugochukwu (Energy-Iame) gained an early lead, followed by the Russian Kirill Smal (Energy-TM) and by Maya Weug (TopKart-TM), a young Dutch girl. The race remained uncertain until the end, but eventually it was Weug who managed to prevail finishing ahead of Smal and the Italian Alfio Spina (CRG-TM), who put in an excellent recovery and took advantage of Ugochukwu’s retirement.