Series Finale On Tap for Route 66 Sprint Series at Springfield 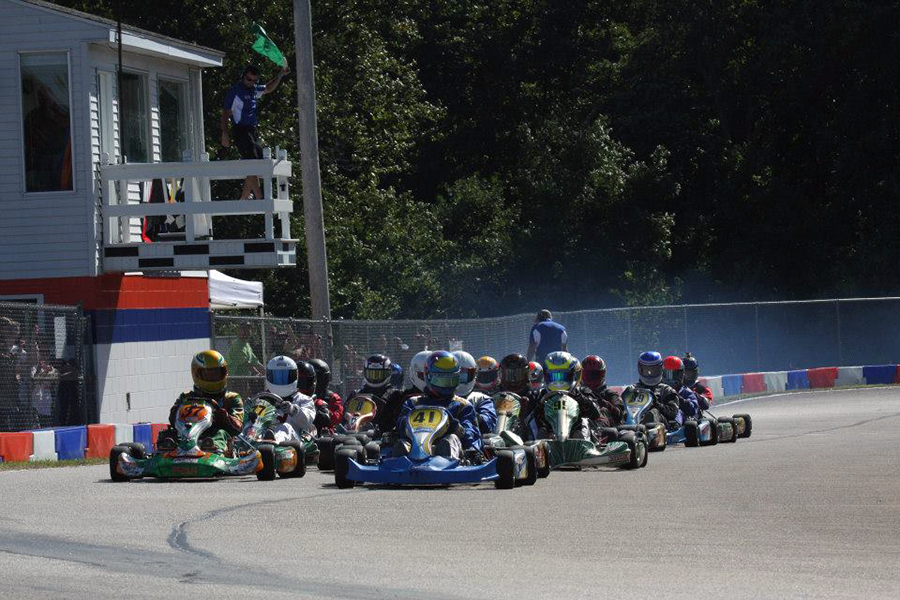 The 2016 season for the Route 66 Sprint Series is set to finish up at the Mid-State Kart Club facility on October 7-9. Racers took the month of September off, following the Princess Snow Gear sponsored event at the Briggs & Stratton Raceway Park in Wisconsin. Round Nine and Ten are scheduled to take place at the Springfield, Illinois facility, sponsored by B&B Electric. Nearly all of the nine championships remain up for grabs, thanks to the best eight of 10 counted toward the year-end standings. The tight confines of the 7/10-mile course is sure to make for an exciting series finale and last major event in the Midwest for 2016.

The weekend serves as the official Loren Niehaus Memorial event, honoring a founding member of the Mid-State Kart Club and long-time tech official. Early registration remains open for the Route 66 Sprint Series finale weekend, open until Monday, October 3 at Noon CDT at the online registration page of the website. Following that deadline, registration opens at the track Friday, October 7 during the track-operated practice day. Three sessions of official practice open Saturday’s action before completing the qualifying, Prefinal and Final for Round Nine. Round Ten on Sunday also includes the qualifying, Prefinal and Final format to close out the 2016 championship series.

The largest category all season long has been the RLV Yamaha Senior division, with the championship coming down to just two drivers. Dakota Pesek has six victories on the year, thus giving him the edge when factoring in the drop races. Overall, Adam Crepin is only 53 points behind thanks to a win, three runner-up and three third-place results. The battle for third includes Collin Griffin, Round Seven winner Emily Hurlbert, and PJ Lyda.

A duel exists in the Merlin Racing Karts IAME Senior championship chase. The advantage resides in the favor of TJ Koyen thanks to his five wins on the season. Koyen has yet to finish outside the top-two positions. Josh Hotz is the top challenger, earning three wins on the year of his own including three runner-up results behind Koyen. The gap before the drops is 170 points, and two wins by Hotz would tighten up the chase. Adam Crepin sits third with Porter Weisensel and Aaron Bromberek with a chance to move up the order at the finale.

The Woltjer Racing Engines Yamaha Junior class has seen five different winners in the eight rounds of competition. Matthew Northrop is one of three to earn a double win weekend, besting the fields both days at the Shawano event. Northrop has remained the championship leader since, while Aidan Harrington has closed the gap. Two wins at South Bend, another podium finish at Dousman has narrowed Northrop’s lead to just 68 points heading into the series finale. Michael Paterno has a solid hold of the third spot while six drivers are within 100 points for the fourth position. Dillon Schwanbeck, Zach Della, Arie Venberg, Greg Della, Austin Schaff and Vince Scatena are among the contenders for the spot.

Stephen Dial has been among the top contenders all season in the Kart Craft IAME Junior class. Dial has led the championship throughout the season, beginning with a double-win weekend in New Castle. He added another victory in Shawano, racking up five runner-up finishes to keep him on top of the standings. Maks Kowalski holds the second spot with six podium results, including a Round Three victory. Austin Schaff is on the move, winning the last four rounds to put him in position for the championship chase. Max Peichel is fourth entering the weekend with Cole Sensel in fifth.

Nothing has been decided in the Switch Racing Engines Yamaha Cadet division. Kyle Thome currently holds the number one position in the standings with six top-two finishes. Kaden Wharff has four victories in 2016, and sits second in the standings after a DQ and DNF in Round Four and Five. Logan Adams leads the battle for third over Lucas Smalec and Taylor Maas.

One hundred points is the advantage for Kaden Wharff in the Allison Racing Engines IAME Swift Cadet standings. Wharff has five wins and two third-place results to hold the top spot heading into the finale weekend. Taylor Maas has accumulated six podium results on the year to sit second in the standings, holding just one victory on the year. Kyle Thome is a close third with a victory of his own, with four runner-up results as well. Nicholas Terlecki sits fourth with James Lynch leading the fight for the fifth position.

Elliot Cox holds the lead in both the Williams Racing Engines Yamaha Rookie standings and the Express Karts & Parts IAME Swift Rookie championship. Cox has seven of the eight victories in the Yamaha division, provisionally locking up the championship. Just one win in IAME, Cox holds a 85-point lead over Evan Zarbo, another race winner. Christian Miles is making a late charge, and will be a factor when calculating the drops after missing Shawano. Miles has won the last four rounds, including two runner-ups at New Castle to put him right in the championship chase. Ryker Mattes and Dane Sensel led the battle for the fourth position heading into the finale.

Indy Ragan is the Hollywood Crane Service Kid Kart championship leader heading into the final weekend. Five victories put Ragan at the top and tough to beat with two rounds remaining. Austin Olds sits second in the chase, just ahead of Sean Dixon. Cameron Brinkman and Dane Van Dyck also remain in the battle, all sitting within 67 points back of Olds.