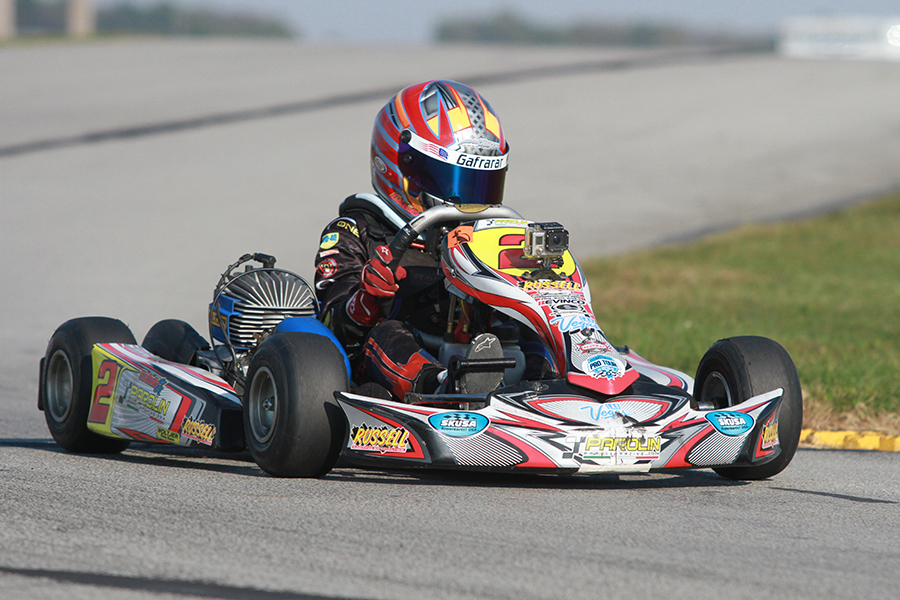 Caleb drove to his first ever victory in the Mini Swift division at the WKA Manufacturers Cup Series Grand Nationals in New Castle, Indiana (Photo: eKartingNews.com)

Success continues for eight-year-old Caleb Gafrarar into his first full season at the Cadet level in North American karting. The second-generation driver continues to gather knowledge behind the wheel and grow as a young boy around the sport of karting. The latest event took ‘Caleb G’ back to the New Castle Motorsports Park in Indiana, site of the 2016 WKA Bridgestone Manufactures Cup Series Grand National. Up for grabs was the coveted World Karting Association Eagle trophy to all the main event winners on the September 23-25 weekend. Gafrarar was able to add a second major trophy to his mantle, winning the Saturday Main Event in the Mini Swift division, earning the opportunity to sit the WKA Eagle next to his IKF Duffy trophy earned last year in California.

The weekend officially kicked off Saturday with qualifying after Gafrarar ran among the fast drivers in Friday practice. The Saturday morning session featured Gafrarar posting the quickest lap of the session on his second circuit, securing the top position by just over two tenths of a second aboard his Russell Karting Specialties Parolin machine with Woltjer Racing Engines IAME Swift power. Caleb led seven of the eight laps of the opening heat race, missing out on the win by 36 thousandths of a second at the line. Gafrarar was shuffled back to third in the second heat race right on the bumper of the top two. A great start from the outside of row one put Caleb into the lead, trailed by the top two from Heat #2. It was not until the last corner of the last lap he was challenged for the position. A cross-over move by Gafrarar placed him on the inside of the long-pond straight toward the checkered flag. His competitor tried to drive toward the inside of the track to eliminate the run by Caleb. The young Gafrarar never lifted, driving through the grass with two wheels, and was able to reach the checkered flag first by 16 thousandths. 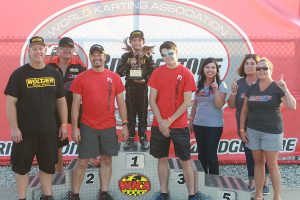 The battle continued on Sunday, with Gafrarar right there at the front again. Caleb finished the qualifying second in the order, out of the top spot by 41 thousandths. Once again, Gafrarar led the first seven of eight laps in Heat #1, placing second in the race. Trouble on the grid for Heat #2 prevented Caleb from leaving with the rest of the Mini Swift field and was ready to rejoin from pit lane after the green flag were to be displayed. An incident in the opening corner brought out a red flag situation, and after officials debriefed, Gafrarar was placed at the tail of the field for the restart. Caleb drove his best laps all weekend, knifing his way forward from 13th to fifth in eight laps. That result placed him third on the grid for the main event. He remained in that position for much of the feature race after leading the opening circuit. It came down to the final corner of the final lap once again. His two competitors in front of him went side-by-side. Gafrarar tried to find a path that gave him the better shot at the lead. In the closing feet to the checkered flag, Caleb pulled out trying to reach the stripe first. At the line, Gafrarar came just 62 thousandths short of earning a second WKA Eagle on the weekend.

Overall, it was the best weekend performance by Gafrarar in the series, racking up two podium finishes including one pole position in two rounds of racing. The points earned over the two days gave him the overall weekend winner trophy for the Mini Swift category, his first of the year. In the championship chase, Caleb finished the year third in the standings with five podium finishes, three pole positions, including two victories in 10 rounds of competition.

Caleb G has two more racing programs to close out for the 2016 season. The RLV WKA Gold Cup Series holds its season finale at the Carolina Motorsports Park in Kershaw, SC on October 7-9 with Caleb on top of the championship standings. The Superkarts! USA SuperNationals 20 in Las Vegas completes the 2016 SKUSA Pro Tour with Gafarar making his debut at the 20th edition of the event.