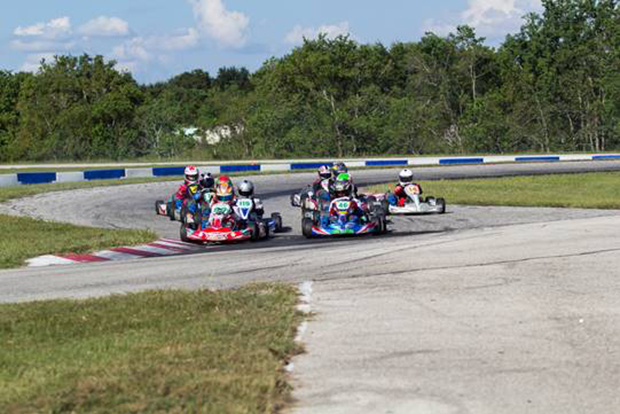 The third race of the year for the Texas Sprint Racing Series (TSRS) presented by MG Tireswas held on the weekend of September 17-18 at Gulf Coast Karters in Katy, Texas. The event proved the series growth with a record number of entries in both the Energy Kart USA 2-stroke and Alan Rudolph Racing Academy 4-stroke classes for this third event of the year. TSRS again had a stellar LO206 field and along with the World Formulas, TaGs and Shifters, all provided very close and exciting racing around the challenging .7-mile layout.

The World Formula class sponsored by Trailer Alarms again provided one of the best shows of the weekend with close battles. Robby Mott (Ribtect / Rpm RaceKarts / Margay) took the pole in qualifying and never looked back as he scored the victory in both heats and the main. World Formula points leader Shawn Ross (DR Kart Tork) qualified second and chased Mott all weekend finishing in second in all heats and the main event. Patrick Roth (CRG / Rpm RaceKarts) drove consistent all weekend and finished a strong third. Shawn Ross still maintains the points lead with Mott and Roth running second and third respectively and looking to chase down Ross in the final event. 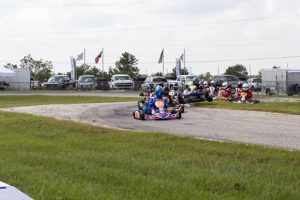 The LO206 Senior Class sponsored by 1 Fast Auto Transport had very tough competition during the entire weekend with both hometown racers and out of town racers fighting for the top positions. The LO206 Light qualifying was close with GCKI Racer Barry Peel (Alpha Karts) taking the pole and showing that he was the one to beat all weekend.  Peel took the win in both heat races and the main but was penalized one position for a driving infraction.  The penalty gave Nathan Wilkins (CRG) the win but Peel’s overall performance gave him the top spot in the points chase. Brett Mitchell (Alpha Karts) finished third in the main to give Alpha Karts two podium positions in the LO206 Light class. Tommy Muth (Texas Karts / Intrepid) claimed the fourth position and sits second in the championship points battle. Nathan Wilkins (CRG) is currently third in points with Steven Hefley (Praga) fourth.

The WacoTrailers.com LO206 Heavy Class saw Brad Holly make is first appearance at the TSRS event at hishometown track. Holly (CRG) dominated the class by taking the pole, heats and main event victories.  Chris Crosley (Intrepid) secured second overall and is leading the overall points chase. Waco racer Tommy Sutton crossed the stripe in third in just his second event of the year. Marvin Lee claimed the fourth position on the weekend and currently sits second in the points. Overall the racing in the LO206 class is amazing and truly the most affordable kart racing class in the country thanks to Briggs & Stratton.

The LO206 Cadet class sponsored by LiMi Makeup provided great driving by young drivers.  Cameron Reed ran her first TSRS event of the year and dominated the class by taking the pole, heat and main wins. Rpm RaceKarts and CRG drivers Jerry Rhodes finished second with Austin Roy in third. The two CRG drivers chased Reed all weekend but she was too strong. Rhodes has a comfortable lead in the points battle with Roy chasing him in second.

The Texas Karts TaG Cadet class was very busy with lots of great racing all weekend by these young drivers. In his first appearance with TSRS, Aden Rudolph (ARRA / Birel) took the pole position in qualifying. Alex Stanfield (Core Karting / Energy Kart) showed he had the will to win by taking the top spot in both heats and the main event.  Rudolph stayed a close second to Stanfield and was always a threat. Caiden Mitchell took the third position with a strong consistent performance with Santiago Robles (Tony) finishing fourth. Stanfield leads the point battle in TaG Cadet with Caiden Mitchell a close second.  Ethan Foxworth remains in the third position with Santiago Robles chasing him in fourth. 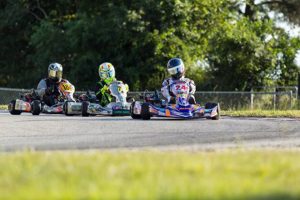 The Wilson Fire Equipment TaG Light & Heavy Class enjoyed some hard fought battles all weekend. In TaG Light GCKI racers took all podium positions. Ryan Rush (Alpha Karts) dominated the weekend by taking the pole and the win each time he was on the track. Newcomer Chuck Beare (Tony) finished the weekend second with Bryce Lytle (CompKart) in P3 and Jeffery Collins in fourth. Marcellas Dukes has a strong points lead with Will Snyder running second and Ryan Rush in third.

The Core Karting Shifter Light class was very exciting and saw newcomer Riley Dickenson (Sodi) dominate the class by taking the pole and the win each time on the track. Blair Hosie (Alpha Karts) ran a consistent second all weekend but incurred a two-position penalty for jumping the start in the main. Overall Hosie finished fourth but showed how strong this young man is and will be in the future. Newcomer and GCKI Racer Alexis Acosta (ItalKart) claimed the second position by being consistent and persistent on the track. Alexis finished just ahead of Andretta Young (CRG Nordam) who took home the third position. Currently the points lead belongs to Carson Muellar (CRG / Rpm RaceKarts) with Randall Burnett (Tony) running a close second.

In Shifter Junior, driver Jacob Boubel (Alpha Karts) swept the weekend and can clinch the series title in Race #4 at NTK.