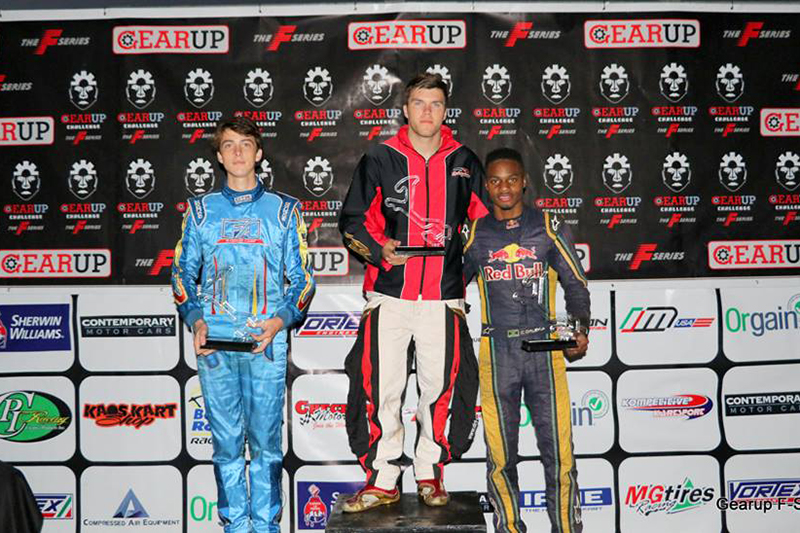 Modena Engines USA displayed a strong performance at the final round of the Gearup F Series this past weekend, which was held at the New Jersey Motorsports Park track in Millville, NJ. The double-header final event featured racing on both Saturday and Sunday, and Modena had five drivers competing in the stacked shifter class field. The top results went to driver Rory Van der Steur, who landed on the podium for Saturday’s final with a second place finish, and ended Sunday’s final just shy of the podium in the fourth position.

Van der Steur came out strong as always on board his Kosmic/Modena package, taking the lead and the win in Saturday’s pre-final. In the 12-lap final, Van der Steur fought hard and finished in the second position, just over a second behind the leader. On Sunday, he turned up the heat again, ending the pre-final with a third place result and managed to take home fourth in the final event — even after a contact in turn one bent up the front end of his chassis. Van der Steur proved the true power held in the CPI Racing – Modena engine package, reaching speeds of 90 mph on the straight at the New Jersey racetrack.

Modena also had several other drivers finishing in the top ten, including Steve Libretto, who finished eighth in Saturday’s final, and Andrea Nieri, who claimed the ninth position in both day’s finals. Libretto and Nieri have been consistently making strides throughout the season with Modena engine power behind them.

Modena Engines USA will be seen next at SKUSA Supernationals 20, and is also offering various engine package options for the event. If you are interested in renting a Modena engine package for the Supernationals event, contact Phil Davis at info@modenaenginesusa.com or 301-667-1320, or Fisher Racing Engines at fisherracingengines@hotmail.com. Be sure to visit www.modenaenginesusa.com and follow on Facebook @modenaenginesusa to stay up-to-date with the latest news and results.