Beaming Champions and New Winners at the DKM Final in Kerpen 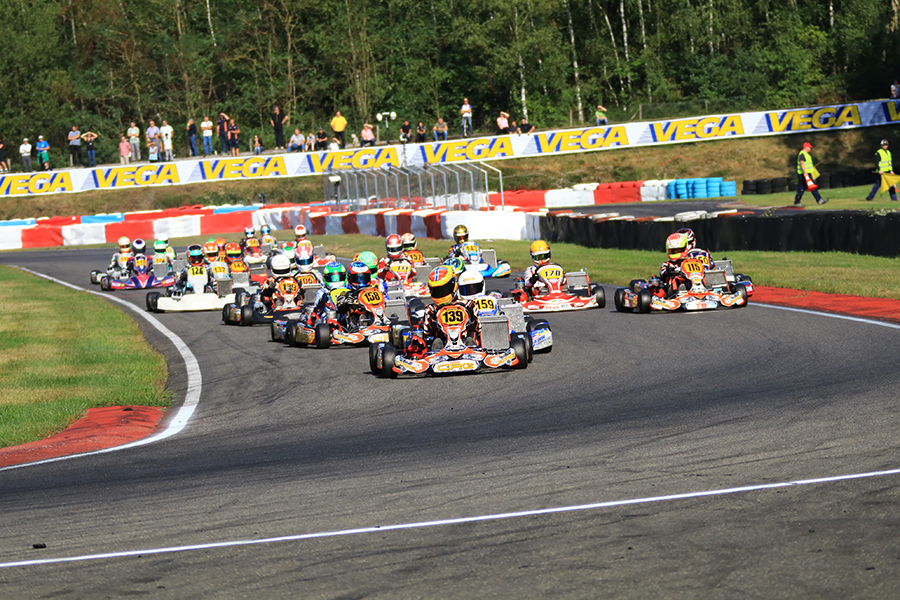 The exciting season of the German Kart Championship couldn’t have ended any better. Under best conditions, 112 drivers started into the final ranked races. There were numerous new winners. In the evening, Max Tubben (DSKC), Dennis Hauger (DJKM), Jorrit Pex (DSKM) and Paavo Tonteri (DKM) were honored as champions.

After four exciting racing weekends in Wackersdorf, Ampfing, Genk (Belgium) and Oschersleben, the drivers of the four DMSB grade series travelled to the Erftlandring in Kerpen for the last ranked races of the year. The conditions couldn’t have been any better during the course of the three racing days. In bright sunshine, numerous spectators cheered for the 112 drivers from more than 20 nations.

Regarding the fight for the titles, there had only been an early decision in the German Kart Championship. Paavo Tonteri (CRG TB Racing Team) was already the new champion after the last race in Oschersleben. Everything was still open in the three other categories though: On Sunday evening, Dennis Hauger (DJKM), Max Tubben (DSKC) and Jorrit Pex (DSKM) stood on top of the winners’ podium as the new champions. There were also numerous surprises and several new winners in the ranked races.

DKM series coordinator Stefan Wagner was in the best mood on Sunday evening and already looked forward excitedly towards 2017: “First of all I’d like to congratulate the winners and champions on their successes. We’ve experienced a really great season with strong fields of participants. I’d like to thank the hosts, organizers, partners, drivers and teams for their commitment and support. Each one has a share in the DKM’s success. We’ve already been working fiercely on the plans for the 2017 season for the past couple of weeks. In the near future we’ll be able to present the racing calendar.”

Max Tubben (CRG Holland) travelled to the 1.107m long Erftlandring as the clear leading driver and was able to tie in with his recent strong successes on Saturday. The rookie won qualifying and the heats. From pole position, the CRG driver lost the lead during the first final race though. His strongest championship opponent Symen Wiggers (CRG Holland) was at the front after the first lap. But Tubben didn’t give up, fought his way back and secured his fifth victory of the season. On the overall list of rankings he was thereby uncatchable on the first position and was overjoyed at the finish line: “I’m so happy to have won the title. I’d like to thank my mechanic, my team and my parents for their support. Now I’m looking forward to 2017. I’m going to rise to the German Shifterkart Championship then.” After initial fights for positions, the following positions were quickly secured as well. Patrick Kreutz (RS Motorsport) fought his way to second place. Maximilian Paul (NKS for Racing) followed on third place in front of Jeroen Bos (CRG Holland) and Wiggers on fourth and fifth positions.

Tobias Mähler of the Kartshop Ampfing’s team caused a small surprise at the end of the season. During the first couple of laps, the Bavarian fought his way forward from sixth starting position to the front of the DSKC-field and celebrated his first season victory. “I never would have thought that my season was going to end with a victory. I started with new tires and we were fully focused on winning. It’s a great feeling and I’d really like to thank my team”, Mähler rejoiced in the evening. The new champion Tubben had a bad start into the season finale though, but came in second in the end. Patrick Kreutz (RS Motorsport) was among the top three again in front of David Detmers (MSR Motorsport) and Stefan Weber (Kartshop Ampfing).

The name Pex defined the season finale of the German Shifterkart Championship. The youngest Stan Pex (CRG Holland) was unstoppable during the beginning in Kerpen again. After his race victory in Oschersleben, he dominated qualifying on the Erftlandring as well and led the list of rankings on Saturday evening. From pole position, the young Dutchman achieved a perfect start. He kept his opponent Alexander Schmitz (KSW BirelART Austria Racing Team) at bay throughout the entire race and won his second ranked race in a row. Reigning champion Schmitz found his old strength again on his home track and celebrated his best result of the year by coming in second. The third winner was decided during the last third of the race. Guest driver Bas Lammers (Sodi Racing Team) drove past Jorrit Pex (CRG Holland) and thereby secured the last place on the podium. Despite missing out on a top three result, Pex also had a reason to rejoice. The Dutchman secured the overall victory at the DSKM for the fifth time in his career and thereby made history: “After a yearlong break I’m back at the top of the DSKM. It was a really great season for me, I’ve been leading the overall list of rankings since the beginning of the year and now I’m proud to be five-time champion”, Pex said at the finish line. Behind him, Davide Foré (Gold Kart Racing Team) followed on fifth place.

Kick-off winner Pex achieved the best start during the second race as well and led the DSKM-field throughout the first couple of laps. Patrik Hajek (Kosmic Racing Departement) and Guust Specken (Guust Specken) raced to the front though. Both overtook the Dutchman and fought for victory from then on. After several changes in the lead, Specken finally came in first in front of Czech Hajek. Third winner Pex experienced a calm race and ended up on the podium again. The fight for the remaining cup ranks was considerably tighter. At the finish line, German BirelART-duo André Matisic (Solgat Motorsport) and Alexander Schmitz (BirelART Austria Racing Team) prevailed over the competition. Davide Foré (Gold Kart Racing Team) and Bas Lammers (Sodi Racing Team) showed an incredible race. Both of them had to start from the pit lane and drove forward to seventh and ninth places respectively.

Regarding the fight for the title of the German Junior Kart Championship, all eyes were on the two leading drivers Dennis Hauger (CRG Holland) and Charles Milesi (Tony Kart Racing Team). Before the finale, the duo was only 9 points apart. Hauger achieved the first match point: The Norwegian won qualifying with a razor-thin advance of 24 hundredth of seconds. Things went in favor of the CRG driver during the following heats as well. “I’m very content with today. I’m in Kerpen for the first time and had to get used to the track first. That went really well though and now I can’t lose sight of the championship”, Hauger summed up.

The first race was coined by numerous fights for positions. At the front, Hauger and Kas Haverkort (CRG Keijzer Racing) changed places a lot. A few laps before the end of the race, Haverkort drove away from his opponents and crossed the finish line first. Hauger followed on second place in front of his direct rival Milesi. Things therefore stayed exciting regarding the championship. Best German driver was Doureid Ghattas (TR Motorsport) on fourth place in front of Théo Pourchaire (Kosmic Racing Departement) on fifth.

The second final junior race was dominated by the fight for the title. French Milesi led the race up to the tenth lap. But a slip-up destroyed the Tony kart driver’s dream of winning the title – he fell back to eighth place. The duel for victory continued at the front: Niklas Krütten (Ricky Flynn Motorsport) and Purchaire drove bumper to bumper. The decision was made during the last lap: Pourchaire drove past the German and celebrated his first victory of the season. Second winner Krütten received a five-seconds-penalty afterwards and was only ranked sixth. New second winner was Dennis Hauger – the CRG driver from Norway thereby secured the junior title. “I could have joined in on the duel for victory during the race. After Milesi’s slip-up I knew that my position was enough to win though. I’m really happy and excited about my success”, rejoiced the new junior champion. Haverkort, Ghattas and Matej Kacovsky (Emilia Kart srl) completed the top five.

New champion Paavo Tonteri (CRG TB Racing Team) started into the racing events on the Erftlandring with a victory at qualifying. During the following heats, he used his good starting position and led the field into the first final race as pole-setter. The Finn had to go one down here though. Local driver David Brinkmann (KSM Schumacher Racing Team) took the lead and celebrated his first victory in Germany’s highest kart racing series. The race wasn’t easy for the local driver though: Luca Lippkau (CRG TB Racing Team) put a lot of pressure on the Tony kart driver. A few laps before the end of the race a collision happened though and Lippkau dropped out of the race. “It’s a great feeling to celebrate the first DKM victory on my home track. My team did a great job”, rejoiced winner David Brinkmann. The decision regarding second place was equally turbulent. Karol Basz (Kosmic Racing Departement) and Tonteri fought a thrilling duel. During the last lap, the two collided and Basz dropped out of the race shortly before the finish line. Tonteri wasn’t able to be happy about his second place for long: A five-seconds-penalty threw him back to fourth place. Noah Lilell (Kosmic Racing Departement) was new second winner in front of Felix Arnold (KSM Schumacher Racing Team). Tim Tröger (CRG TB Racing Team) followed on fifth place.

After Brinkmann at the first race, team mate Felix Arnold achieved the second victory in front of a local audience for the KSM Schumacher Racing Team. For quite a while, he fought with Basz and Brinkmann. After two lead-changes, Arnold drove off from his opponents in the end and achieved his first victory at the German Kart Championship. Basz got a conciliable ending by coming in second in front of Brinkmann after his falling out at the first race. British Clement Novalak (Tony Kart Racing Team) followed on fourth place in front of Luca Lippkau. The latter drove from 14th starting position to fifth place. Champion Paavo Tonteri already dropped out during the first few laps, but still celebrated in the evening: “This weekend was all about a good ending for me. It was a lot of fun to start at the DKM, the whole team did a great job and accompanied me on the way to the title.”

The highlights of the season finale in Kerpen can be viewed on Motorvision TV again. The 30-minute-long magazine is going to be broadcast October 2nd at 2.55pm. Everyone who missed the television premiere can look forward to several re-runs. The highlights can be viewed again on October 3rd at 1.30am as well as on October 9th and 10th at 3.25pm and 1.25am respectively.