AKRA Southern Tour Wraps Up with Competitive Racing at Bushnell 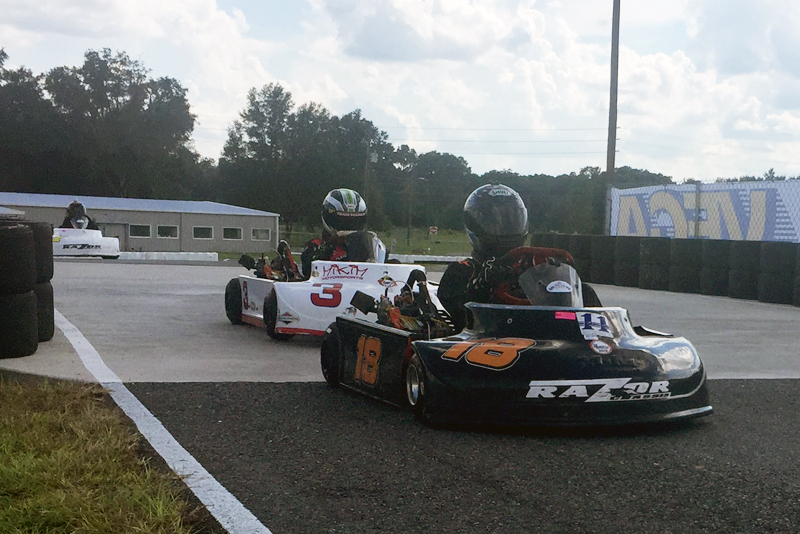 The American Kart Racing Association closed the doors on our inaugural Vega American Sprint Cup Series “Southern Tour” this past weekend with another successful, fun-filled event – this time at the new, pristine Bushnell Motorsports Park in Bushnell, Florida.

Competitors from Georgia, Florida, Tennessee and Louisiana filled Bushnell’s pit area for Round 3 presented by IONIC Edge Chassis – the first-ever touring series event to be held at BMP – which features a bridge and underpass, several hairpins, multiple chicanes and a banked, flat-out left-hander. Additions are still being made to the facility that will make it even better in 2017, and AKRA officials are looking forward to continuing a positive working relationship with the track next year.

Another plus is a clean, affordable hotel and plenty of dining, literally, within walking distance from the facility, which sits less than a half-mile off Interstate 75.

Arguably the most competitive class of the weekend was Kart City Performance 206 Cadet, which consistently attracted solid entry counts at Southern and Northern Tour events this year.

Elijah Skaggs of Murfreesboro, TN, scored feature wins both days aboard his No. 1 IONIC Edge Chassis. Skaggs’ victories were his first in the AKRA series and ended Tanner Carter’s four-race winning streak in the 206 Cadet division in the Southern Tour.   Elmer Edmonson made his first-ever AKRA appearance and was strong all weekend. Edmonson would finish P2 in Saturday’s 206 Cadet main. Carter settled for P3 with Owen Lloyd, Louisiana’s Camryn Reed and local racer Darryl Lea Moglia rounding out the competitive six-kart field.

Sunday’s 206 Cadet contests featured spirited battles between Skaggs and Carter. Elijah finished just ahead of Tanner in the 8-lap heat race to set up another awesome battle in the final. Skaggs and Carter would swap the lead position numerous times in the 14-lapper.

Skaggs pulled ahead with a handful of laps to go and with just a lap and a half remaining, Carter made a rare mistake, slipping off the track on exit to a hairpin, giving Skaggs some breathing room on the final lap. Carter closed the gap once again, but came up just shy of his fifth AKRA win of the season. Skaggs would score the victory over Carter with Lloyd improving from Saturday for a P3 finish. Edmonson settled for P4, just behind Lloyd, with Reed rounding out the top five.

The Smith twin brothers moved their entry to 206 Heavy for Sunday, and Fry went home, leaving only Warren and McLapper in Medium for the final day of racing. Warren would drive to an easy win over McLapper.

Sunday’s 206 Senior Heavy was combined with 206 Masters and Junior and saw 10 karts take the green flag. Tyler Smith would drive his No. 18 Razor to the win over his brother, Aren Smith. However, Aren tipped the scales a pound light, resulting in a DQ. Taylor would move to P2 and Warren P3. Joseph Skaggs pulled off early and was credited with P4.

Margay pilot Hunter Fox raced with AKRA for the first time and won both days Briggs Racing 206 Junior mains. Fox raced with the Heavy and Masters drivers and was in the thick of the battle both days, showing solid driving skills and respect to the others who were battling in their own classes.

Miller swept Saturday’s competition, scoring the Pole Award, heat and main event wins. On Sunday, Miller returned to capture the Pole Award and heat win. Bridges, who was glued to Miller’s back bumper all weekend, found a tremendous amount of speed in Sunday’s final and pulled out to a convincing win over Miller. The pair split the Southern Tour Kid Kart wins in 2016, each scoring three victories.

Colin Warren won TaG Senior both days, while Nick Trumbull made his first AKRA start, and won TaG Junior aboard his Tony Kart.