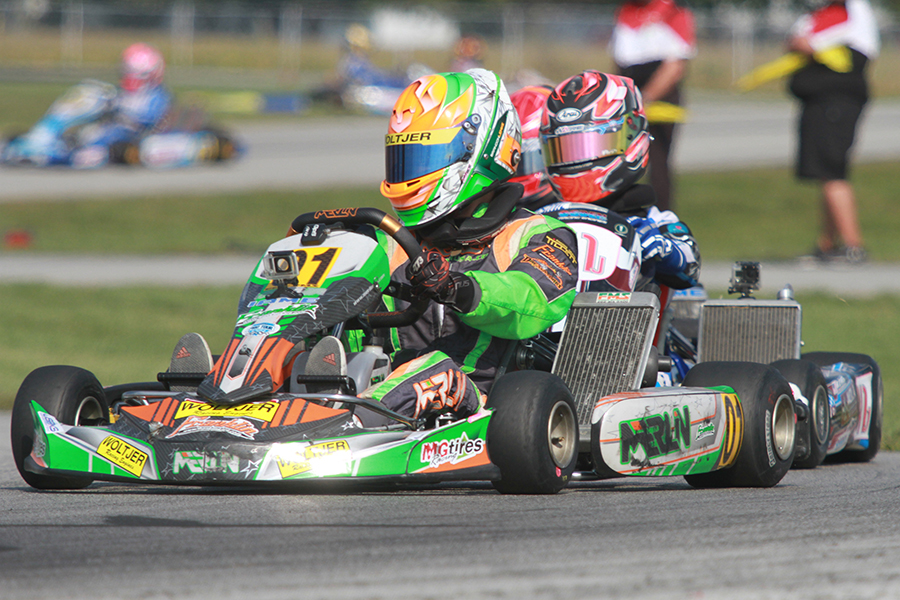 The final day of the 2016 season for the WKA Bridgestone Manufacturers Cup Series was completed on Sunday at the New Castle Motorsports Park. Bright sunshine greeted the racers at the Top Kart USA Grand Nationals final day of racing, with the 10th and final round of the championship program deciding the eight series champions. Many of the title winners were decided prior to the final laps of the season, with a few coming down to the final circuits to crown the 2016 champions.

The victory by Braden Eves Saturday locked up the championship in the KartSport North America Pro IAME Senior division. That left the final round up for grabs to anyone, as it was just about who was going to race to the victory. Brandon Lemke (Merlin) and Brandon Jarsocrak (Praga) were up to the challenge, taking top honors in qualifying and the heat races to make up the front row. Eves (Kosmic) joined them at the front of the field, with former point leader Jonathan Kotyk (Top Kart) making up the lead group. Lemke took the lead from the start with Jarsocrak and Eves fighting for the top challenger position. Lemke kept his pace consistent to remain out front, leading all 16 laps ahead to earn his first Senior IAME victory. Jarsocrak edged out Eves for the second spot, with Kotyk falling off the draft in fourth. Local driver Mick Gabriel (Tony Kart) completed the top-five. 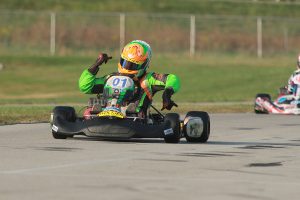 The Fullerton Karts USA was exciting all day long, as all eight of the drivers made up the lead pack for much of the day. Braden Eves (Formula K) wrappepu the championship and the day was about who would come away with the WKA Eagle trophy. Eves set fast time in qualifying while he and Emerson Reed (Top Kart) each took a heat race win. Eves and Brandon Lemke (Merlin) were able to get away with Reed trailing as the rest of the field fought for fourth. Lemke stayed locked on Eves bumper until the final lap, making a deep move at the cell tower corner to catch Eves off-guard. It gave Lemke enough space for the remainder of the lap to cruise to the checkered flag for a second WKA Eagle on the day, and his second win in the Yamaha Senior division on the year. Eves had to settle for the second spot with Reed in third. Billy Lewis (Arrow) edged out Jake Venberg (Merlin) for the fourth spot.

The perfect weekend was completed by Tyler Gonzalez as he ran away with the Woltjer Racing Engines Pro IAME Junior class. The Tony Kart driver had the field covered all day Saturday and repeated the performance on Sunday. Some challenge was brought early on in the day, but the Florida driver grabbed a second WKA Eagle on the weekend with blistering pace in the 16-lap main event, driving to a eight-second advantage. The fight was for second, as Lance Fenderson (Tony Kart) was able to hold off Pauly Massimino (Top Kart), who earned the provisional championship. Michael Cruz (FA Kart) won the battle for fourth over Tyler Ferris (Top Kart).

Title chances remained as the FranklinKart.com Yamaha Junior field took to the track for the main event. Tyler Ferris (Top Kart) did his part by winning both heat races to start the main event from the pole position. JP Southern (Top Kart) started outside the front row, and the two pulled away early. Eventually, Ferris pulled off the track with an exhaust issue, ending his day and chance at the title. Hope remained for Southern as he led with Colin Neal (Tony Kart) and title contender Pauly Massimino (Top Kart) on his bumper. The race to the checkered flag saw Southern left out as Massimino locked onto Neal, helping to push him alongside and past Southern. At the line, Neal would cross the line to earn his first ever WKA Grand National Eagle, with Massimino edging out Southern for second. That was enough to give Massimino the championship, his second for 2016. Ian Hornish (Tony Kart) beat Margay driver Spike Kohlbecker for the fourth position. 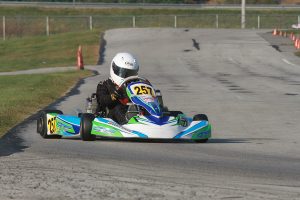 Three drivers set the pace in the IAME USA East Pro Swift Sportsman category. Madison Campeau (Top Kart) posted fast time in qualifying as Logan Adams (FA Kart) and point leader Luca Mars (Benik) each took a heat race win. Adams and Mars led the field to the green flag in the main event with the championship still up for grabs. Mars and returning driver Jason Welage (Top Kart) set the pace through the 14 laps. Welage was leading on the final lap when Mars made his move at the I-70 corner. He exited the corner with enough momentum to hold off the drag race to the checkered flag to earn his third victory on the season and secure the championship. Welage settled for second over Saturday winner Devin Gomez (Benik) and Kaden Wharff (Top Kart). Adams completed the top five in fifth ahead of Madison Campeau (Top Kart).

Madison Campeau became the latest female driver to earn a WKA championship, securing the title after qualifying Sunday in the Allison Racing Engines Yamaha Sportsman division. Campeau earned her second victory of the season Saturday, and Sunday was just about drivers going all out for a win of their own. Nick Snell (Benik) came away with fast time in qualifying, only to see Kaden Wharff (Top Kart) and Sam Hinds (FA Kart) win in the heat races. A six driver lead pack formed in the main event, with Snell leading early until Logan Adams (FA Kart) made his way up to the front. He led while Zane Maloney (Praga) continued to inch his way forward, taking a position lap after lap from his P7 starting spot. Maloney was second on the final lap behind Adams, making his move at the cell tower corner. Fighting behind him for second at the green corner gave him enough of a gap heading to the checkered flag. The Barbados driver was able to hold off a late charge by Adams to reach the line first by six thousandths of a second to earn his first victory of the season and the Grand National Eagle. Snell finished third with Campeau ending her championship run in fourth, ahead of Wharff. 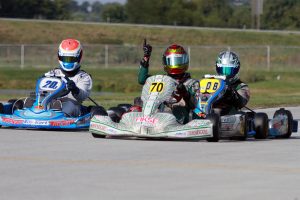 The day belonged to Eli Trull in the CRPRacing.com Mini Swift division. Jeremy Fletcher locked up the championship on Saturday and moved up to the Pro class, opening the door for anyone to take the top position on the day for the second Grand Nationals Eagle. Caleb Gafrarar (Parolin) took Saturday’s trophy for his first in his career, while Trull earned his Sunday with a sweep. It wasn’t an easy day, edging out Gafrarar for the pole position and winning the opening heat. The second heat was a bit dramatic, with Gafrarar unable to get fired when the field left the grid. When the original green flag waved, he was going to leave from pit lane. Unfortunately, a red flag was thrown after the opening corner as someone mid-pack went sideways, and collected a number of drivers. Sofia d’Arrigo (Praga) went over hard, and needed medical attention. Special props goes out Thomas Annunziata (Top Kart) who was drove over by d’Arrigo and he managed to get up out of his kart and lift it off Sofia in a matter of seconds. The field restarted with Gafrarar at the back, with Trull driving to the win over Christian Miles (Praga). Gafrarar worked his way up to fifth, putting him P3 for the main event grid. The three pulled away. Miles led the majority of the race with Trull waiting in the wings with Gafrarar trailing in third. Trull made his move on the final lap at the I-70 corner, coming out with the lead. Gafrarar followed through and tried to find a way around Trull. The two drag raced with Trull able to get the better run down the straight for the victory. Miles settled for third with Annunziata edging out Adam Brickley (Energy) for fifth.

The Water for a Cause Kid Kart wrapped up the year with Indy Ragan earning the championship and the final round victory. Austin Olds swept Saturday and was on his way to doing the same Sunday, except Ragan was able to keep pace in the main event. On the final circuit, Ragan worked past Olds, and the two drag raced to the checkered flag. Ragan edged Olds by 89 thousandths of a second for the WKA Eagle. Karsyn Walters ran alone in third with Christopher Bowman beating Dusty Larson for fourth.