CRG Takes the Win at the ADAC Kart Masters of Wackersdorf 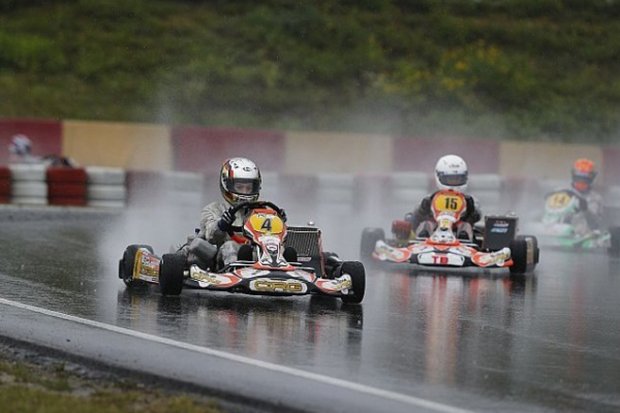 Luca Maish and Tim Tröger, both on CRG-Parilla run by CRG TB Racing Team, secured respectively the OK Junior and OK titles in the fifth and closing round of ADAC in Wackersdorf. The closing round of DKM to take place on Sunday September 25th in Kerpen with CRG on top of all categories.

CRG winning streak continued in Germany at the ADAC Kart Masters, the German Championship that reached its conclusion last weekend with the fifth round held at the circuit Prokart Raceland of Wackersdorf. The closing race of the championship awarded the national titles after the rounds of Hunsrückring/Hahn, Ampfing, Kerpen and Oschersleben.

The difficult weather conditions made the ADAC German Championship round of Wackersdorf even trickier, but the OK Junior and OK titles were eventually secured by two drivers of CRG TB Racing Team on CRG-Parilla. Luca Maish claimed in fact the OK Junior Championship with 217 points, leading team mate Hugo Sasse at 186 points, while OK title was won by Tim Tröger thanks to the double win scored in this round.

Hugo Sasse posted the quickest time in OK Junior’s qualifying, as Luca Maish was only 11th. Hugo Sasse ended heats in second place, but Luca Maish started his comeback climbing up to P4. In the first of the two Finals the victory went surprisingly Marius Zug’s ways on CRG-Tm run by team RL-Competition, who closed on top his dominant run started from P6, completing a stunning top three finish for CRG, as Sasse and Maish rounded off the podium in second and third. The victory of the second Final went to Hugo Sasse, but Luca Maish claimed the title thanks to the second place. Marius Zug was 13th in Final two instead. Niels Tröger (CRG-Tm) was also on track with CRG TB Racing Team, Luca Störmer (CRG-Tm) with SRP Racing Team, Linus Jansen (CRG-Tm) and Mathias Torreggiani (CRG-Tm) with CRG Holland.

Tim Tröger has been the quickest of OK since qualifying leading team mate Nermin Colakovic, who was at his first race in this championship. Tröger won the two heats and dominated both finals, while Colakovic secured two fourth places in the finals.

AWAIT MOUNTING FOR THE DKM CLOSER IN KERPEN

CRG is now preparing the main event of DKM in Kerpen, race that will close the Deutschen Kart Meisterschaft next 23-25 September. CRG drivers are currently leading all categories: the Dutch driver Jorrit Pex (CRG-Tm) of CRG Holland is leading KZ2, the Finn Paavo Tonteri secured the OK title on CRG-Parilla run by CRG TB Racing Team since the round of Oschersleben, the Norwegian Dennis Hauger, on CRG-Parilla run by CRG Holland, is leading OK Junior, while the young Dutch Max Tubben is leading KZ2 Cup on CRG Holland’s CRG-Tm.