Another Hot One for Los Angeles Karting Championship 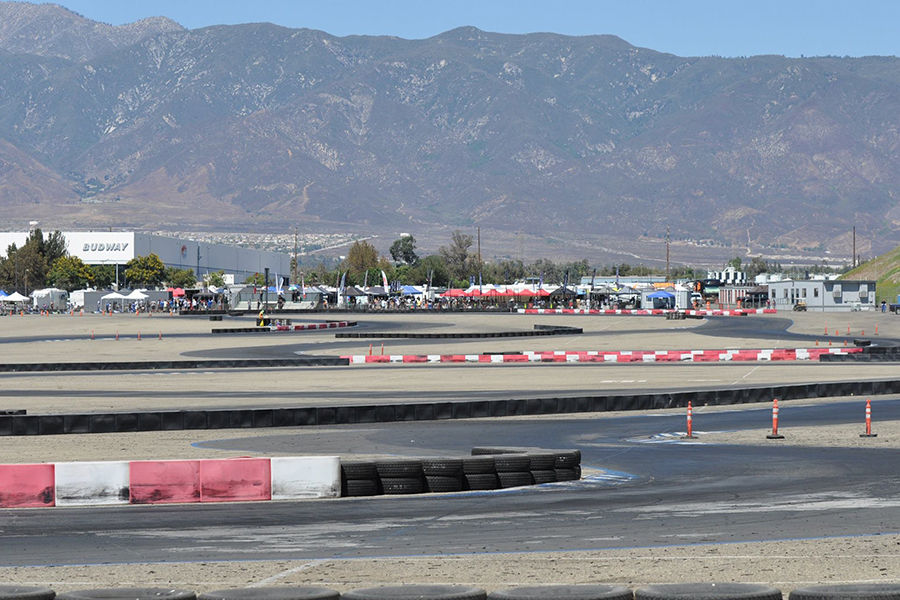 There has been no escaping the heat this summer in California and for the Los Angeles Karting Championship. The eight round of the 2016 season was contested on September 18 with temperatures reaching triple digits once again. The penultimate event in the championship chase – contested on the ‘Classico’ counterclockwise layout at the CalSpeed Karting Center in Fontana, California – helped a number of drivers stand out with only one round left to decide this year’s title winners.

The temperature doesn’t seem to affect Carson Morgan as the Cadet driver doubled up in the win column for a second straight event. The largest class of the weekend was the P1 Engines Mini Swift division, featuring 23 of the next super stars in karting. Cole Keith Cotham set fast lap in qualifying, clearing Anthony Willis by one tenth of a second as Morgan clocked in the fifth best time. Cole Morgan, Cotham and Willis each took a turn at the lead until Carson Morgan worked his way into the top spot. Morgan scored the race win with championship leader Daniel Inzunza following him through for second. The duo were joined by Willis at the front, jostling for the lead lap after lap. Inzunza secured the top spot on lap 14, and led the final four laps to reach the checkered flag first. Inzunza was penalized two positions for an on-track infraction, thus handing the victory to Morgan. Cotham slipped in to finish second with Inzunza down to third. Willis ended up fourth ahead of Bryce Stevens. Morgan then went on to sweep the Fleming Racing Engines Junior 1 Comer category. After securing fast time in qualifying, Morgan led all 10 laps of the Prefinal before going on to lead 17 of the 18 laps in the main event en route to the victory. Cotham kept it close, leading the one lap Morgan did not, crossing the line just nine hundredths back of the victor. Aiden Dodge drove to third over Kasey Gillis and Chance Gibson. 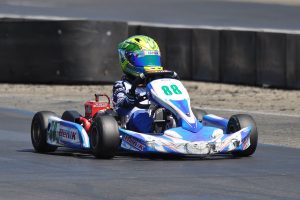 Carlee Taylor was able to notch the first victory of the season in the 2 Wild Karting X30 Pro division. Jake Drew, making his second start of the year, came out as the driver to beat. Drew set fast time in qualifying (37.905) and beat Nicky Hays for the Prefinal win. After leading the opening lap, Drew was shuffled back and eventually out of the top-five later in the race. That opened the door for a charging Taylor and Andrick Zeen. On lap five, Zeen took over the top position and led for four laps until a broken throttle cable put him on the sideline. That gave the lead back to Taylor, as she was able to run away to the victory. Hays was shuffled back early and fought back to finish second, closing in late with the fast laps of the race. Worawong Komarakul drove to third in his first start of 2016, placing ahead of Cody Kelleher and Colby DuBato.

There were a total of five sweeps on the day, including a fourth victory on the year for John Crow, the Mike Manning Karting TaG Master point leader. Crow cleared the field in qualifying by four tenths of a second, before leading every lap of the Prefinal and Final for a perfect round. New Jersey driver Chris Giumarra made the trek cross-country, driving to the second position over Paul Bonilla who made his 2016 LAKC debut. Travis Irving ended up fourth with Gary Lennon in fifth. A fifth victory was garnered by Royal McKee in the Musgrave Racing Company S3 Novice Stock Moto division. McKee led the entire day, capping it off with a 1.5-second victory in the main event to extend his championship lead. Prescott Campbell ended up second with Garrett McKelvie edging out Adrian Yong and Anthony Fontana for third. A familiar driver dominated the Phil Giebler Racing Open 125 Shifter class on the day, making a return to the seat for the first time in 2016. Former SKUSA Pro Tour champion Alan Sciuto set the pace throughout the round, driving to a 18-second advantage in the main event. Point leader Slava Prikhodko ended up second ahead of Troy Butts. 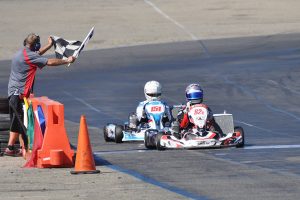 The Ryan Perry Motorsport X30 Junior race was a battle of two drivers – point leader Ryan Schartau and Trey Brown. The first battle went to Brown, edging Schartau by over a tenth of a second in qualifying. Brown held the advantage early on in the Prefinal, until Schartau made a late charge and reached the line first by 34 thousandths of a second. The two swapped the lead throughout the 18-lap main event, with Brown securing the lead as they took the white flag. Brown was able to establish a large enough gap to reach the checkered flag first for his third victory on the season. Schartau settled for second with Zoey Edenholm in third. Calder McWhinney and Joseph Daniele capped off the top-five.

Brendon Cramer came away with his second victory in the Mack Motorsports PRD Junior 2 class on the year. It was a close affair throughout the day, including qualifying when Cramer edged out Round Two winner Mia Butts by 89 thousandths for fast time. Cramer led the first eight laps of the Prefinal until Brenden DeLorto took over, scoring the win. DeLorto led the first 17 laps of the main event as Cramer sat, waiting for the right opportunity. A final lap maneuver secured the lead and the victory for Cramer. DeLorto missed the checkered flag first by 65 thousandths of a second. Zachary Abollahi was third with Pierce Sullivan fourth and Ricco Shlamoun in fifth.

Aidan Yoder notched his second straight in the 2Wild Karting X30 Intermediate category. Yoder set the pace in qualifying and led the first seven laps of the Prefinal until a mechanical issue put him on the sidelines. That allowed Gino Alfonso-Macauley to score the race win. Yoder started just outside the top-10, and knifed his way quickly through the field. In just two laps, Yoder was into the second position, needing just three more circuits to take back the lead. Yoder drove away to a six-second advantage for the victory. Gino drove to second with Michel Manning joining them on the podium. Alyssa Yauney and point leader Joey Paonessa completed the top-five. 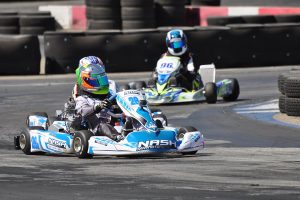 Two drivers continue to show the way in the Empire Karts Micro Swift division. Cooper Hicks had five victories heading into the weekend with Frankie Mossman holding two. Hicks held the advantage on the day, leading in qualifying and drove the win in the Prefinal. Mossman turned up the heat, leading the majority of the race. The two exchanged the top position for three laps toward the end until Mossman locked up the position. At the line, Mossman scored his third victory over Hicks. Jesus Vasquez Jr. was a close third, with AJ Matheson fourth and Mathias Coito in fifth.

The day looked to belong to Logan Chambers in the freem Honda Kid Kart category, looking for his third victory of the season. Chambers led the way in qualifying and all eight laps in the Prefinal. Championship leader Logan Ainsworth was right there, and put on the pressure in the main event. The two swapped the lead nearly every circuit until Ainsworth secured the top position late. At the checkered, it was Ainsworth with his fourth victory of the season. Chambers settled for second with Brodey Vicars in third. Drake Cardey and John Antonino completed the top-five. 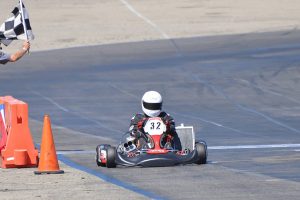 Alan Sciuto is back behind the wheel of a kart, driving to a sweep in the Open Shifter category (Photo: Kart Racer TV)