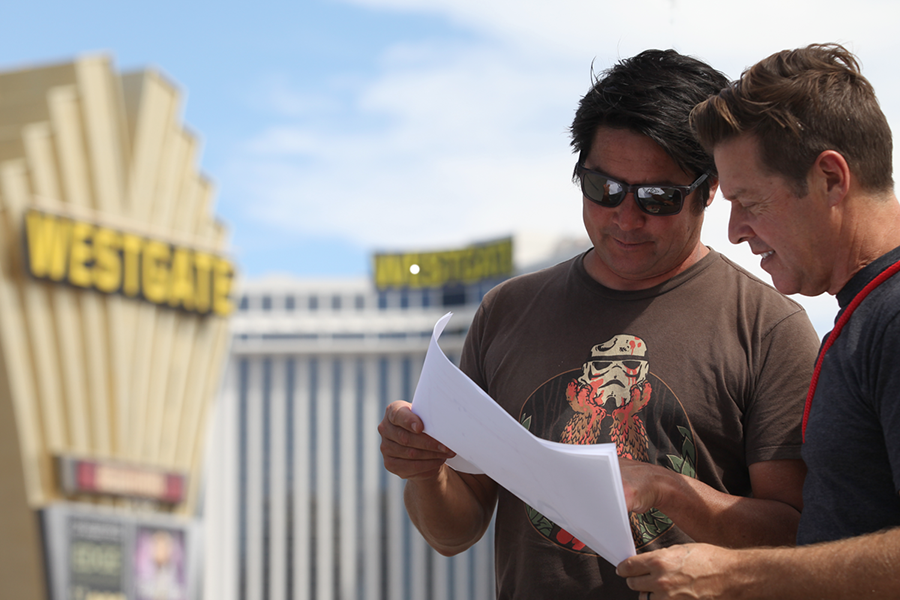 Superkarts! USA has charged a pair of SuperNationals veterans – Bonnier Moulton and Howie Idelson – with design of the track layout for the 20th running of their marquee event (Photo: eyenovation.com)

When you look back at the history of the Superkarts! USA SuperNationals, you’ll see a long list of impressive names, guys like Speed, Allmendinger, Rahal, Hinchcliffe, Bomarito, Kimball, McDowell, Perez and Wickens who have gone on to professional careers in motorsports. You’ll also revel in the career karters who make the race what it truly is.  In the 19 years since the debut of the SuperNationals, only two drivers have participated each year.  Bonnier Moulton and Howie Idelson were at the first race in 1997 and they have been on the entry list in every edition since.  For the 20th running of SKUSA’s marquee event, the organization has charged this veteran duo with the task of designing a new track layout at the Las Vegas Convention Center.  It’s a tribute, for one, and the guarantee of a challenging layout, as well.

“I raced the SuperNationals for five seasons when I started karting and own a shop. And I can still remember vividly the way the thrill of it all coursed through my body on SuperSunday,” offered Tom Kutscher, Superkarts! USA CEO. “I know why Bonnier and Howie keep coming back and, as the owner of SKUSA and promoter of the race for the last 10 years, it’s a honor that they have.  It would be difficult to find two guys more dedicated to shifterkart racing. They were there at the start and they’re still here today.  I’m super excited to see what we come up with for the design for SuperNationals 20.  This is so cool.”

Moulton has enjoyed his share of success at the SuperNationals, winning on three occasions. The Utah resident was victorious in the G1 class in 2004 at Sam Boyd Stadium and stood on top of the podium in the S4 Master Stock Moto category in 2011 and 2012 at the Rio.  Bonnier’s success began from the race’s debut, as he was also on the podium in the inaugural running of the SuperNationals, held in 1997 at the kart track in Sloan, NV.  Moulton is no stranger to track design, as he drew up the initial layout for the highly-acclaimed Black Rock Raceway in Utah, which was eventually bulldozed to make way for Miller Motorsports Park – now Utah Motorsports Complex.

“I’m honored to have been asked by SKUSA to take part in the track design for SuperNationals 20,” Moulton enthused. “Anyone who knows me understands how important this race is to me, it’s been the focus of my racing for 20 years!  Howie and I have been working hard to create a layout worthy of the 20th edition of the best kart race on the planet. Hopefully people will dig what we come up with.”

Idelson’s legacy in the sport of karting is immense.  The Californian has raced since he was 11 year’s old and competed in 12 countries. In addition to countless race wins and many championships, he also represented the United States in karting events on several occasions. Howie was a co-founder of the Gearbox and Renspeed brands, and was one of the factory drivers for the Renspeed program that helped raise shifterkart racing to a new level in the late 90s.

“I eat, breathe, and dream racing,” Idelson admitted. “The process of trying to figure out how to go faster gets me up in the morning, sometimes it keeps me awake at night. My love for the sport gives me breath. My life in karting has given me treasures that are beyond estimation: I met my wife at the kart track, I’ve raced in twelve countries including Russia, I have made lifelong friends, some of which have gone on to great fame in car racing, I’ve had incredible successes and devastating injury, I’ve won a lot, learned how to accept losing and I started a karting products company and even designed a popular kart chassis. I love it now more then ever. Now I have the privilege of sharing karting with my son. I’ve been very lucky.”

“Designing the track layout for the 20th SuperNationals is both an honor and a responsibility I will not take lightly,” added Idelson. “I hope Bonner and I can deliver a solution worthy of the product that this event deserves.”

Everyone involved in the track and venue layout design team has travelled to Las Vegas over the last 12 hours and final planning will be completed over the next two days. The focus for this new layout will be to eliminate the first corner carnage of the past and to deliver a ‘drivers’ track’ with multiple overtaking opportunities that challenges racers with each turn.  SKUSA will release the track design at a future date.