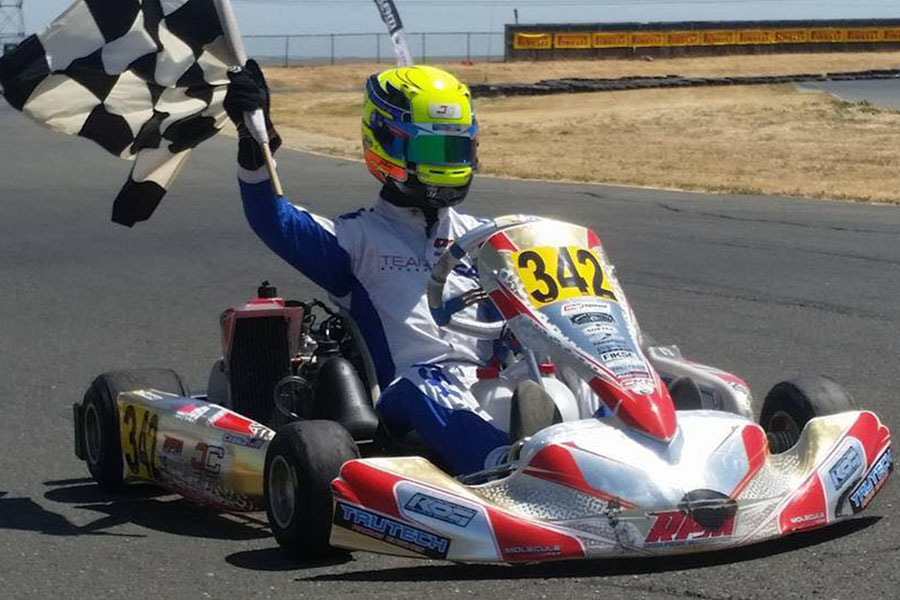 The 2014 season was a memorable 12 months for southern California driver Jake Craig. Driving a Tony Kart for 2Wild Karting, Craig secured victories at the Challenge of the Americas, went on to score the Superkarts! USA Pro Tour championship, and secured victory at the US Rotax Grand Nationals. Craig has remained among the top-five drivers in TaG competition throughout the 2015 season, and has continued to remain on the forefront in 2016. After working with the IPKarting operation for over a year, the two parties have gone separate ways with Craig returning back to the OTK brand.

Craig has done very little Rotax racing, but one or two events, during the first half of the 2016 season. With this year’s US Rotax Grand Nationals held at the Simraceway Performance Karting Center in Sonoma, it was a no-brainer for Craig to compete. The event began with Jake qualifying third following the SuperPole session that included 2013 champ Oliver Askew, 2016 Challenge of the Americas title winner Christian Brooks, Team USA 2015 member Matt Solarczyk and 2014 Junior national champion Austin Garrison. Craig finished two of his heat races right behind Askew while placing fourth in the second moto, retaining the third starting spot for the Prefinal. 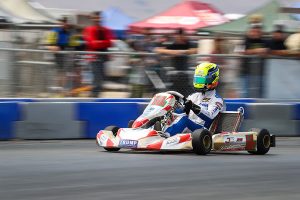 Jake won the S1 division in only his second start at the California ProKart Challenge (Photo: DromoPhotos.com)

The start of the Prefinal saw Craig attack early, jumping into the lead. He led the first eight laps until both Brooks and Askew worked past. Jake worked his way back into the lead by lap 13, holding on the final few laps to secure the pole position for the main event. Craig and Askew were able to work together to get away from the rest of the field in the 22-lap event. The first three laps were paced by Jake, with Oliver slipping by on lap four. Askew showed the way until Craig made his move with three laps to go. After building up a little gap, Craig came under attack in the final circuit with Askew making a last lap, last corner surge for the victory. Contact was made as the two crossed the with Craig reaching the stripe first to edge out Askew by a slim four thousandths of a second.

Later that month, Craig swapped out the single-speed powerplant for six gears to make only his second S1 Pro start at the California ProKart Challenge. His first attempt ended early after brake issues placed him on the sidelines. This time, Craig was all in at the Santa Maria Kart Track. Craig set fast time in against the seven driver field, including three other SuperNationals winners and two former Pro Tour champions. Championship leader Billy Musgrave came through with the opening heat race win while Craig was awarded P1 in the second heat after contact penalty was handed to Musgrave. Starting P1 for the main event, Craig fell to fifth overall after the opening lap in the race group including the S2 Semi-Pro field. Once past the top S2 pilots, Jake reeled in 2013 Pro Tour champ and SuperNationals winner Joey Wimsett and Musgrave. First was Musgrave, moving to second with four laps remaining. With two laps to go, Craig moved into the lead and score his first ever S1 Pro victory.

In between the two events, Jake took a second Los Angeles Karting Championships ‘Pro Show’ victory. The special Saturday night event returned for the August round of the LAKC program, with the X30 Pro drivers paced by Craig for a second time in 2016. Craig is scheduled to do the double-duty at the SKUSA SuperNationals 20, competing in the X30 Senior division and the S1 Pro Stock Moto division, still gunning for that first SuperSunday victory. 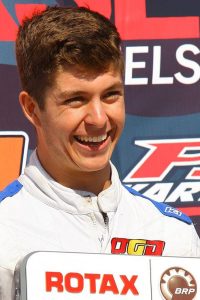 Chassis: OTK
Engine/Engine Builder: X30-Tru Tech Racing Engines/ Swedetech-Stock Honda
Sponsors: Armor Fence Concepts, TruTech Racing Engines, Molecule, APM Racing, RPM, and Courtney Concepts
Series You Compete In: SKUSA Pro Tour and select Rotax events
Years Karting: 14
How did you get started in karting? My dad took me to the track one day and I fell in love with racing.
What has been the high point in your racing career? Winning two Rotax National Championships has been huge. Along with becoming a factory driver for Formula K in 2015.
What are your goals in racing? My ultimate goal in racing is either Formula One or IndyCar.
In a few words, how would you describe your driving style? Smooth, calculated, and aggressive.
Funniest moment at the race track? There is simply too many to name.

What do you do when not at the track? I am either training or working at Tru Tech Racing Engines.
What are your goals outside of karting? I would like to start racing formula cars.
What type of street car do you drive? Mini Cooper S
What type of street car would you like to drive? Mercedes GTS AMG
What are your pet peeves or things that irritate you? Arrogance
What do you think could be done to improve the sport of karting? Teach younger drivers to have more respect for each other.
What are your favorite aspects about the sport of karting? I love how close the karting community is and the pure form of racing.