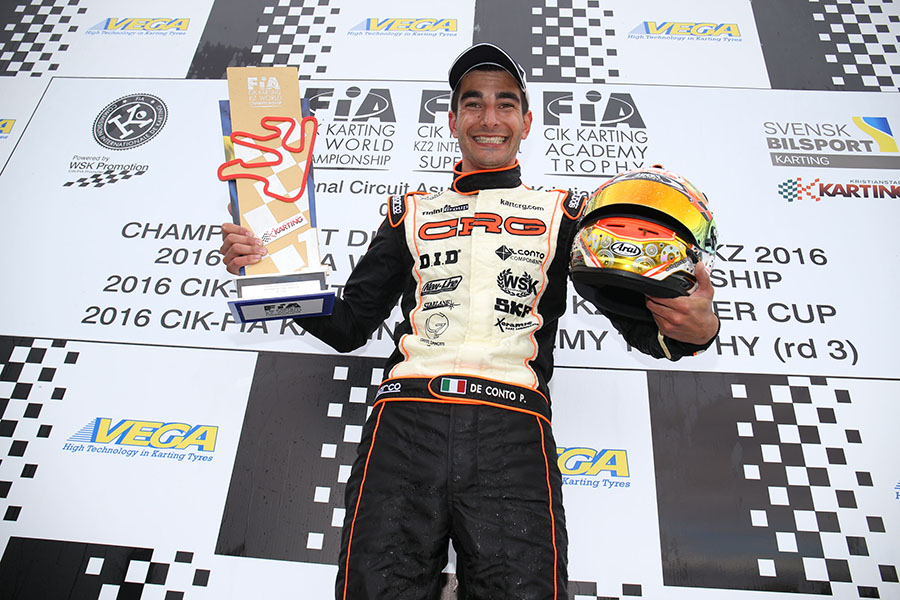 Fresh from victory at the World Karting Championship in Sweden, Paolo De Conto will be heading to Australia next month to compete at the International Race of Stars powered by SuperFest on the Gold Coast, Queensland.

De Conto’s Australian debut will be his first race since having been crowned World Champion and the Italian can’t wait to head ‘Down Under’.

“It is a very exciting opportunity for me.  I’ve never been to Australia and everyone tells me the Gold Coast is beautiful,” said DeConto.

It will be the first time in more than 20 years that a current World Karting Champion has competed in Australia.

The 24 year-old Italian will join the CRG Australia team for the October 14-16 event.  Having secured the winners surfboard with Italian Davide Forè, De Conto is keen to make it three in a row for the team.

“Davide speaks very highly of the event, and the Australian people, he has been to the Gold Coast for the past two years and always has a smile on his face when anyone mentions Australia,” said De Conto.

“It will be an honour to join the CRG Australia team for the event and hopefully make it three wins in a row for them.”

Having driven karts from the age of three, racing has been a way of life for De Conto and for the past seven years he has been a professional racer throughout the European circuit.

Since enjoying his first major success at the 2009 European Bridgestone Cup De Conto has become a two-time European Champion and enjoyed victory at the SKUSA SuperNationals in Las Vegas, the Winter Cup in Italy and the WSK Champions Cup.  On September 4, he joined and elite club that only one Australian driver – James Courtney – is a part of by taking out the 2016 CIK-FIA World KZ Karting Championship.

The 2010 Supercars and dual World Karting Champion, who is heavily involved in the Australian karting scene through his JC Kart range, will be a keen spectator at the Gold Coast Motorsport Training Centre next month at the Race of Stars.

“I’d always kept a bit of an eye on karting through the years but it was at the Race of Stars two years ago where I really reconnected with the karting scene and its been a real blast being back involved,” said Courtney.

“The drivers at the Race of Stars are the best of the best in the sport, it’s a real showcase event and highlights just how much young talent we’ve got here in Australia.

“I’ve been there to see Davide win the past two years, last year’s race was incredible with him and (Kyle) Ensbey racing wheel to wheel at 160 km/h.  It was one of the best races I’ve ever seen.

“With Paolo coming out to compete this year fresh from winning the World Championship I’d expect another great event and I’ll certainly be trackside watching the action.”

As a part of SuperFest surrounding the Castrol Gold Coast 600 Supercars event the Race of Stars will be held on on October 14-16 at the Gold Coast Motorsport Training Centre, Pimpama.