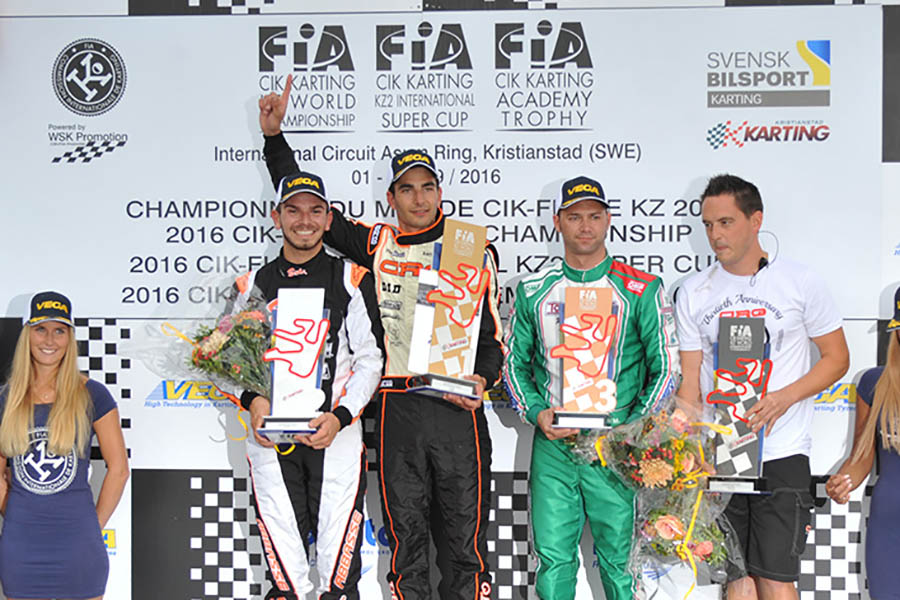 The opening ceremony of the last day of the World CIK-FIA KZ Championship was particularly spectacular, thanks to  an accurate choreography accompanied by a military band and a launch of parachutists, all organized by the Kristianstad Karting Klubb. The show went on stage at the Asum Ring in Kristianstad, in Sweden. In the same weekend, the facility hosted two more kart racing events: the CIK-FIA International Super Cup and the last round of the Academy Trophy: the three events together created a spectacular mix of gripping races for all the motorsport fans who arrived, in great number, from the Scania County to see the racing events. All the final stage of the weekend was available on the web thanks to the two web channels cikfiachampionship.com and cikfia.tv. The media coverage of this special weekend in Sweden will be completed by the resume of the weekend on Motors TV next week. 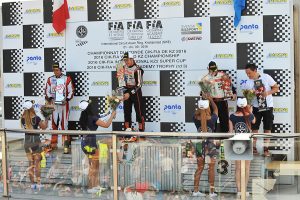 He considered this Championship “his” Championship, the one he missed last year in Le Mans (F) and which was won by the Dutch Jorrit Pex. Paolo De Conto (CRG-TM-Vega) finally made his dream come true in Kristianstad winning a tough Final. In fact, the Italian driver did not have a good start and got overtaken (in the photo above) by his fellow countryman Marco Ardigò (Tony Kart-Vortex), who kept the lead of the race for the first ten laps followed by the French Abbasse (Sodi-TM). Then Ardigò started to lose ground and the leadership was taken over by Abbasse, while De Conto was inexorably closing the gap. After some more laps, De Conto managed to reach Abbasse and to pass him after a great duel. Then, the Italian managed to pull away and to win the Final. Eventually, Ardigò managed to step onto the podium, fending off the Dutch Bas Lammers’ (Sodi-TM) attacks.

In KZ2, the Italian Felice Tiene (CRG-TM-Vega) attacked since the start of the Final and gained the lead of the race. Behind him another Italian, Tommaso Mosca (Maranello-TM) who even managed to take over the leadership and to keep it for some laps, but whose engine broke down later on. Tiene dropped back after he went off track while battling for the leadership; it was then that the Spanish Pedro Hiltbrand (CRG-Maxter-Vega) took control of the race, followed by the Italian Fabian Federer (CRG-Modena). The two drivers finished in first and second position. So, Hiltbrand won the International Super Cup (above, te podium) with merit, but a special mention goes also to the Swedish Ben Tornqvist, third after a start from the sixth slot on the grid. Tiene finished in fourth position. 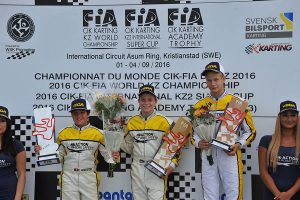 The Dutch Kas Haverkort (above, in the middlòe of the podium) won the Final of the Academy beating the Belgian Elie Goldstein and the Swedish Alfred Nilsson into second and third position. The British Callum Bradshaw, thanks to his fourth place, won the Trophy (below, the prizegiving) and he also gained the possibility to take part in the OKJ World Championship in November in Bahrain (all the drivers on Exprit-Vortex-Vega).