There is nothing like it. From a quite area of city streets Friday afternoon to screaming engines at 8am Saturday morning, roaring around a 6/10-mile circuit built from nothing to a full race track in just a matter of hours. That is just the first 12 hours of the weekend at the Xtream Rock Island Grand Prix powered by Mediacom. Hosting its 22nd edition, the non-profit volunteer organization turns the streets of Rock Island, Illinois from a normal city into a racing event overnight as racers from all across North America converge on the city nestled along the Mississippi River for fun on and off the track.

Two days of racing takes place on the six-turn street course as a total of 17 main events highlight Sunday’s action. The battle is leading up to the feature races and a chance to earn the coveted Rock trophies with Saturday busy day of two practice sessions and heat race for all the categories. It is a wide range of speed, engine types and driver’s age all competing on the weekend.

eKartingNews.com will once again partner with the RIGP family to produce a live audio play-by-play broadcast from the start-finish line on Fourth Avenue, all part of our EKN Trackside Live coverage program presented by TB Kart USA along with social media and forum updates. Route 66 Sprint Series announcer Tim Koyen is replacing EKN’s own Rob Howden for the announcer duties, and you can hear him call all the action throughout the weekend. 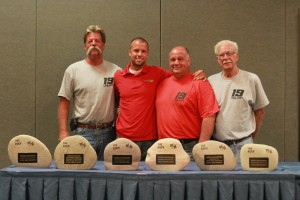 The big story from the 2015 event was the record performance of Tony Neilson winning six Rock trophies from the seven classes he competed in – breaking the 1998 mark of five victories in one year set by Jason Birdsell. Neilson piloted his Margay karts to victory in Briggs 206 Heavy, Briggs 206 Medium, Yamaha Medium, Briggs 206 Masters, Briggs 206 Heavy 2, and Yamaha Heavy 2. Yamaha Heavy was the first main event of the day, in which Neilson was involved in contact to end on the sidelines. The Delmar, Iowa driver is set to compete in all seven categories once again, adding in the Clone Heavy division for a chance at a possible eight victories. Neilson also moved into second overall in the RIGP win total, doubling his count to 12 to jump ahead of Birdsell and Kyle Wiegand with 11. Gary Lawson remains the Czar of Rock Island with 25 total wins during his tenure at the street race.

Who Leaves with Their First Rock Trophy?

Last year’s victory in Clone Heavy by Matt Pewe was one of the most emotional wins of the weekend. Pewe watched as a kid the previous Rock Island Grand Prix events, dreaming one day to claim a victory of his own. After hard luck and near misses, the Quad Cities resident secured his first Rock trophy with the win. Pewe was among a handful of drivers that earned their first victory at the Rock Island Grand Prix in 2015, looking to defend that victory this year. It is the goal, however, for the many others in the 17 categories to become a first time winner this year. 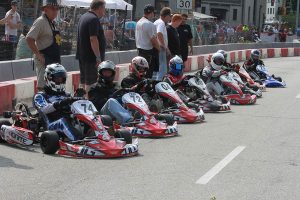 The Margay Ignite Shootout returns with over 20 drivers in Senior and the addition of a Junior class (Photo: EKN)

What has helped to keep the Rock Island Grand Prix going is the growth of the Briggs & Stratton 206 engine. Just over five years ago, numbers were dwindling and 4-Cycle racing was in a state of flux. The Briggs 206 class was introduced in 2012 with 24 drivers taking part. A Heavy class was added in 2013 with a Masters class introduced in 2014. Last year, a second Heavy class along with RIGP partnered up with Margay Racing to offer the Ignite Shootout division. Now 2016 adds a Junior portion to the spec program – making it a total of six classes combined for 135 pre-entries. That is about 75% of the total number in 2014. Briggs & Stratton has been a long-time partner with the event, helping to pay for the second class for a select few that took advantage of the early entry program. It brings together seasoned veterans and newcomers to the sport, making all the races an exciting 15 laps.

The Margay Ignite Shootout welcomed 16 drivers last year for its inaugural event. The 2016 edition has grown, welcoming 22 drivers from nine different states, while adding a Junior division with six drivers scheduled to take part. Margay provides an opportunity for racers to enjoy a full arrive-n-drive program in their spec Ignite K3 package with Bridgestone YDS tires. The class also has a handful of drivers who own their ride, many from the St. Louis area and the new Gateway Kartplex, with many other tracks in the Midwest and throughout the United States utilizing the package for rentals and school in addition to a competition class.

King of the Streets Increases in Numbers 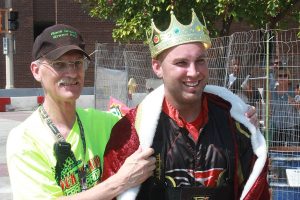 Josh Lane will defend the crown in the King of the Streets (Photo: EKN)

The battle for the crown continues at the Rock Island Grand Prix with the an increase in participation and competition level. The King of the Streets began with Superkarts! USA in 1998 in Oklahoma with Joe Janowski winning the inaugural event. It moved to Quincy in the Park the following year with Alan Rudolph taking the top honor. It was not until 1999 when SKUSA and Jim Murley brought the crown to the RIGP. Rudolph is the all-time winner with five KOS victories. In 2009, the category moved over to the Stock Moto package but returned to the open shifter engines in 2014.

This year’s event has been named the Jim Murley Memorial King of the Streets to honor the former SKUSA CEO. Murley passed away earlier this year after battling cancer, and was a vital role in the RIGP growth during the early 2000’s. Last year’s triumph by Josh Lane was his first in King of the Streets, and is looking to defend the crown. Similar drivers are back to battle for their first triumph in the category, including a small contingent from Texas including EKN Stock Moto Driver Rankings #4 driver Austin Wilkins and #14 Skyler Finley. Texas drivers have won the crown four previous times with Connor Iseli the last in 2014.

Odds are Out the Window in Yamaha 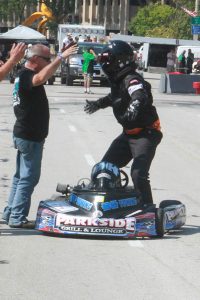 Matt Pewe was one of four first time winner in 2015 (Photo: EKN)

Only 11 drivers have won in the Yamaha SuperCan divisions over the past 22 editions of the Rock Island Grand Prix. There is no telling who is going to come around the sixth and final corner as the leader on the final lap anytime Yamaha karts are buzzing around the street circuit. Last year, Neilson won the Medium and Heavy 2 main event as Tim Goettsch secured a Margay sweep with the Heavy 1 victory. A total of five former SuperCan winners are among the racers in the three classes on the weekend – Neilson, Goettsch, Michael Dittmer, Tony Jump and Mike Welsh. Both Dittmer and Jump have gone winless in the Medium division, while Neilson and Welsh have yet to triumph in the Heavy categories.

TaG Senior will be a watch to see if the Italian Motors USA squad can repeat. Scott Hargrove drove an Italkart to victory last year, with IMSA driver Remo Ruscitti replacing his void. King of the Streets winner Josh Lane will be among the challengers along with Bermuda driver Jason North, RIGP regular Aaron Snyder, and newcomer from Florida Morgan Healey. TaG Masters defending champion Anthony Honeywell is set to race in three categories on the weekend. Honeywell is welcoming the challenge from last year’s provisional winner Ethan Wilson as the Californian is looking to take home the win he lost last year. Redemption is also on the mind of Bermuda driver Scott Barnes, who lost the victory in 125 Masters by coming across the scales one pound underweight. Three-time class winner Lance Lane is back once again, looking for a fourth Rock trophy. TaG Masters 2015 winner Honeywell is looking to upset both by stealing the victory.

Another addition to the Rock Island Grand Prix lineup is the return of 80cc Shifter. A movement in the midwest states have brought on a resurgence of the engine package with over 10 drivers set to bring the high-pitched sound of six-speed racing back to the street race. It has been 14 years the category has competed at the Rock Island Grand Prix, with a good majority of the racers coming over from Indiana, including SIRA point leader Joe Ruch.

Tune in all weekend to see just who leaves with the Rock this weekend!