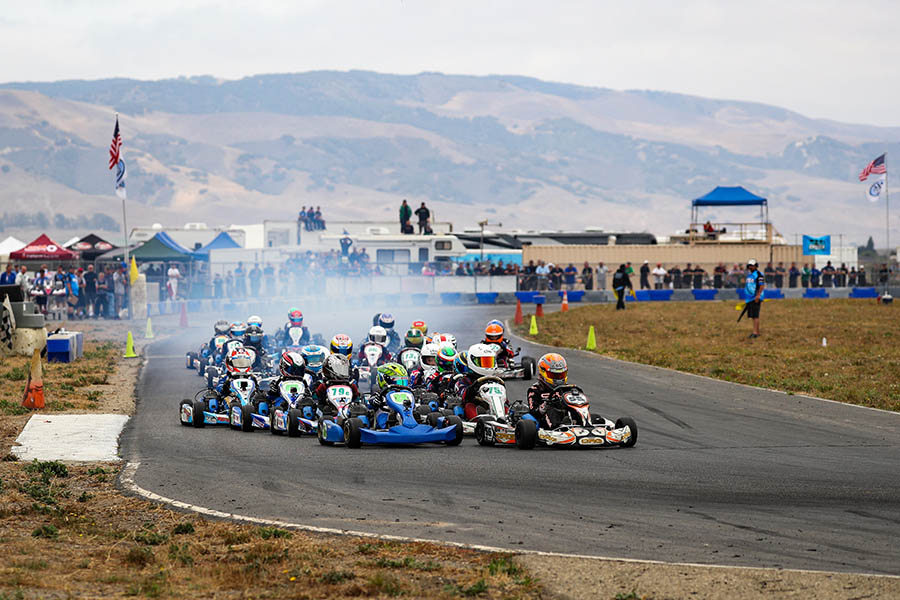 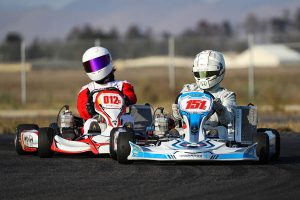 Nicky Hays claimed his second win on the year, helping his case toward the series championship (Photo: DromoPhotos.com)

The penultimate event for the California ProKart Challenge took place on August 26-27 at the Santa Maria Kart Track. It was the first trip back to the Santa Maria, California facility since 2012, as the Superkarts! USA flagship regional program hosted the fifth round of the series championship. Over 150 drivers took part in the event that saw a number of familiar faces landing on top of the podium in the 11 categories as the title chases become more defined heading into the series finale at the end of September.

Chance Skaufel attempted to defend his home track against the regular contenders in the Phil Giebler Racing X30 Senior class. The Santa Maria resident set fast time in qualifying (47.926) to beat out the 18-driver field before leading green-to-checkered in the two 10-lap heat races. Behind him in the two motos was Round Four winner Nicky Hays. Skaufel remained the leader through the majority laps of the main event. It was not until lap 18 that Hays was able to work past Skaufel for the top spot. Hays held on and pulled away to take his second straight checkered flag in the series. Skaufel ended up 2.5 seconds back for the runner-up spot in his California PKC 2016 debut. Behind them was a war, including veteran Matt Johnson and Carter Herrera. Johnson crossed the line as the provisional third place finisher, until he and Herrera (P7) were penalized to the back of the field. That promoted Artie Carpenter to the third step of the podium, championship leader Billy Musgrave to fourth and Cody Kelleher in fifth. 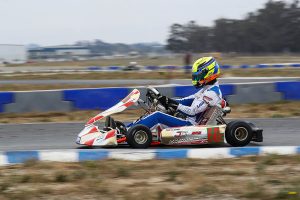 Making only his second start in the 2Wild Karting S1 Pro Stock Moto division, 2014 SKUSA Pro Tour TaG Senior champion Jake Craig scored his first class victory. In a field of stellar drivers, including four previous SuperNationals winners, Craig set the pace in qualifying with a 46.812-second lap, second overall on track behind S2 driver Hunter Pickett with point leader Billy Musgrave just behind Jake. Musgrave got the jump at the start of Heat #1, leading all 10 laps to the win. In Heat #2, former SKUSA Pro Tour champion Joey Wimsett challenged Musgrave for the race win. Wimsett took over the lead on lap 2 until contact on the final circuit allowed Musgrave to slip past and reach the checkered first. Officials penalized Musgrave behind Wimsett, placing them second and third with Craig awarded the race win. The two former SuperNats winners worked around Craig at the start of the main event, but the S1 ‘rookie’ proved too strong at the end. Craig eventually ran down Wimsett, who was suffering from a deflating right rear tire, making a pass at the tight hairpin. They came out side-by-side, with Wimsett clipping the curb the wrong way and spun around. This allowed Craig to drive away to score the victory. Musgrave took second with Wimsett retiring after the spin. Matias Podboj joined them on the podium in third, with Jarred Campbell and Peter Abba completing the top-five. 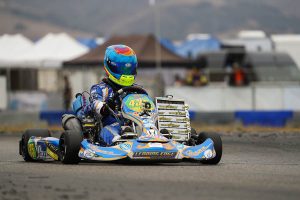 Leading Edge Motorsport S2 Semi-Pro Stock Moto championship leader Hunter Pickett looked to have another victory in hand. Pickett set the fast time overall in the combined S1/S2 qualifying session (46.639) and won both heat races in class, including the overall win in Heat #2. The recent SKUSA Pro Tour victor led the opening laps of the main event until a mechanical issue placed him on the sidelines and out of the race. That promoted S2 rookie Hunter Kelly into the lead. He led the remaining laps unchallenged to claim his first S2 victory in the series. Two-time race winner Callum Smith drove to the runner-up spot, with Josh Early landing his first podium finish of the season. Jessica Sollberger ended up fourth and Matthew O’Donnell fifth.

Mike Rolison added his third victory of the year in the 25-driver Vemme Kart/Extreme Karting X30 Master category with another sweep of the on-track action. Rolison set fast time in qualifying and led all 10 laps of Heat #1. Former SKUSA Pro Tour champion and Indy 500 Rookie of the Year Phil Giebler made his first career start in the category, challenging Rolison. Giebler took over the lead at the start of Heat #2, leading three laps until a mechanical issue sent him to pit lane. That gave the lead back to Rolison, who cruised to the win before leading all 20 laps of the main event for the victory. Giebler showed his top-level talent, driving through the field to clinch the second spot with fast laps of the race. Nick de Graaf notched his second podium of the season in the third position, with Travis Irving and Brian Phillipsen rounding out the top-five. 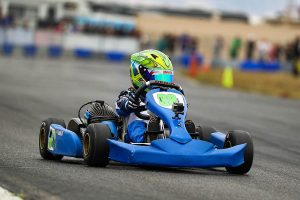 The PKS Professional Kart Support Mini Swift division saw its fifth different winner on the season while also welcoming another strong 30-kart field. Bryce Stevens earned his first fast time in qualifying honor by edging out Carson Morgan. The opening heat race went to Morgan in a photo finish over Aiden Kempf by 29 thousandths of a second. They all were chasing Dominic Gorden at the checkered flag for Heat #2, who took the lead from Morgan on the final lap. Morgan fell to ninth on the last circuit, putting him on row 5 for the start of the main event. It took just eight laps to return to the front, with Morgan stealing the show in the main event. Once into the lead, Carson drove away to a 1.1-second advantage for his first series victory of the season. Jace Jones followed him through for the second spot as Daniel Inzunza capped off the podium. Gorden ended up fourth with Kasey Gillis in fifth.

Dante Yu continued his reign at the front of the Ryan Perry Motorsport X30 Junior class with a third victory on the year. Yu set the pace from the start, topping the charts in qualifying with Oliver Calvo and Zoey Edenholm within eight hundredths of a second. The two-time winner led all 10 laps of the first heat before getting shuffled back to fourth in the final lap of Heat #2. Calvo went on to win the race by 44 thousandths of a second ahead of Joseph Daniele to lead the 22-kart field to the green flag of the main event. Yu made quick work of the top-three, taking over the lead on lap five. From there, he established a 3.251-second advantage for the victory. Calvo settled for second with Daniele on the podium in third. Trey Brown recorded his third top-five finish of the season as Ryan Schartau earned his fourth on the year in the fifth position. 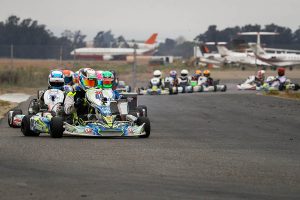 The battle in the Outsource Utility Contractor S3 Novice Stock Moto class began with the two championship contenders going back and forth. Garrett McKelvie struck first, scoring the fast time in qualifying over the 13-kart field. Championship leader Royal McKee got the jump to begin the opening heat and led all 10 laps for the win. He duplicated the feat in Heat #2, with Evan Jonker slipping up to the second position. John Nielsen came forward in the opening lap of the main event to jump ahead of all three, leading the opening three laps. McKee drove back to the point and was able to lead the remainder of the race to reach the checkered flag first. Officials, however, penalized McKee one position for gaining a position under a yellow flag condition. This promoted Jonker to the top of the podium with McKee placed as runner-up. Nielsen recorded his first podium of the season in third with Mike Schneider working past McKelvie for fourth. Dean Heldt led all day long until a mechanical issue late in the main event cost him the win in the Rolison Performance Group S5 Junior Stock Moto class, handing the top spot to Jacopo Pizzinato. Heldt was classified second with Kent Hatada in third.

Kai Sorensen drove to a fourth straight victory in the Top Kart USA Micro Swift division. Cooper Hicks broke up the perfect score attempt early, securing fast time in qualifying by 72 thousandths over Sorensen. Hicks retired on the opening lap of the first heat, allowing Sorensen to take the top spot and lead all 10 laps. Sorensen went wire-to-wire in Heat #2, and extended the lead into the main event to show the way all 14 laps for the victory. Hicks fought back all day and made his way to second, closing in on Sorensen with the fast laps of the main event. Jesus Vasquez Jr. drove to third, with Enzo Deligny and Mathias Coito rounding out the top-five. 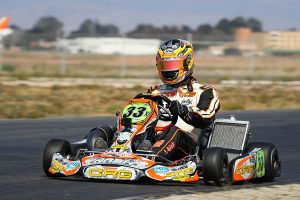 The battle in the Nash Motorsportz S4 Master Stock Moto category was intense all day long. It began with a close session in qualifying as championship leader Robert Marks edged out Alan Michel by a mere one thousandths of a second. Marks led all 10 laps of Heat #1, with Michel taking over late in Heat #2 for the race win. Rob Logan entered the fight, and was the top challenger for Michel in the main event. Logan stayed on the bumper of Michel until the final lap, working past the Round Two winner in the final corners to secure his first victory of the season. Michel settled for second, with Marks finishing the podium in third. Darrell Tunnell notched his second straight victory in the Mike Manning Karting S4 Super Master class. Championship leader Ken Schilling led throughout the day, with Tunnell taking over early on in the main event. He drove away to a near nine-second advantage over Schilling, with Luke Bianco finishing in third.

The California ProKart Challenge is set to close out the 2016 season with a return to Lancaster, California. The Streets of Lancaster Grand Prix is set for a special two-day event on September 24-25 to decide the 2016 series champions. Now established as the premier street race along the west coast, the Streets of Lancaster GP puts Superkarts! USA racers in front of hundreds of spectators while taking on one of the fastest courses on the schedule. Detailed event info will be posted over the coming days, along with the latest point standings from Santa Maria. For more info on anything related to Superkarts! USA, please visit the website – www.superkartsusa.com and be sure to follow the Superkarts! USA Facebook page and Twitter account – or call the SKUSA head office at 951-491-0808.