Wins and Podiums for Caleb Gafrarar During Summer Months Stretch 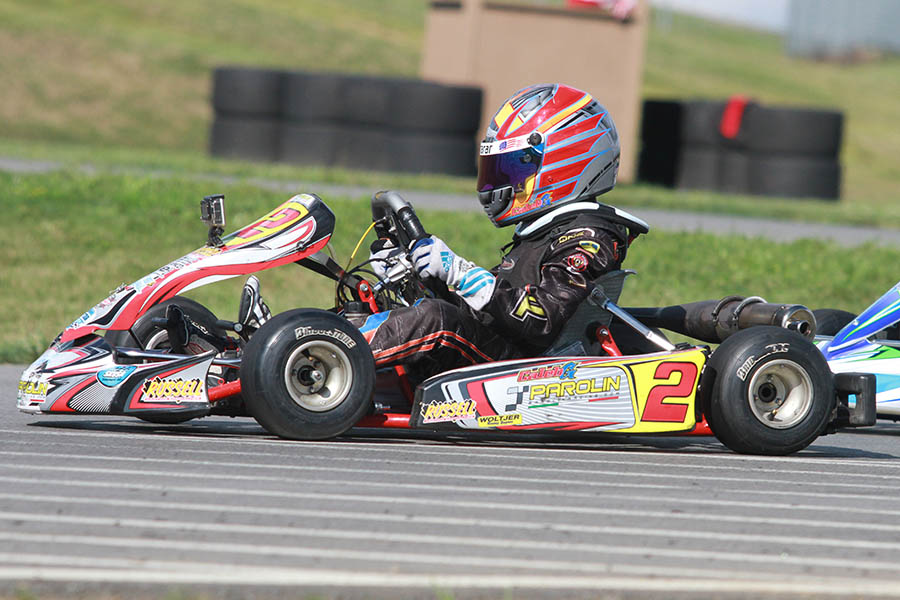 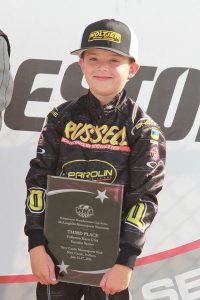 Caleb landed on the podium at the WKA Manufacturers Cup Series event in New Castle, beginning the four race stretch in July and August (Photo: eKartingNews.com)

It has been a successful rookie Cadet season thus far for the eight-year-old Caleb Gafrarar. The transition from Kid Karts to the larger, quicker machines for his age bracket can be a daunting task. As a second-generation driver, the skills and determination are within as the Midland, North Carolina driver continues to refine his talent behind the wheel. The summer months kicked off with his first-ever RLV WKA Gold Cup Series victory in nearby Kershaw, South Carolina, with additional success coming in a span of four races in six weeks during July and August, including three straight events at the New Castle Motorsports Park in New Castle, Indiana.

The busy stretch began with the third stop of the Bridgestone WKA Manufacturers Cup Series with the McLaughlin Motorsports Nationals at New Castle, Indiana. Caleb came out of the gate with the fast time in qualifying (1:15.368) to lead the 20-driver field to the green flag for Heat #1. Gafrarar was unable to complete one lap in the race after his engine shut off mistakenly. Caleb drove from 20th to 14th in Heat #2 to place him 18th on the main event grid. Unfortunately, Gafrarar was involved in an opening lap, opening corner incident that prevented him from completing the event and was classified 17th. Sunday faired on the positive side of the results. It was a close battle in qualifying with Caleb missing out on the top spot by 89 thousandths of a second. After losing the draft in Heat #1 to finish third, contact midway through Heat #2 dropped Gafrarar down to 14th. That placed him seventh on the grid for the feature. With fast laps of the race, Caleb advanced his way to the third position by the checkered flag for his second podium in WKA Manufacturers Cup Series competition.

A week later came the Superkarts! USA Pro Tour SummerNationals at the New Castle facility. It was a switch from the Bridgestone compound to the Evinco aboard the Russell Karting Specialties Parolin machine, only the second time Gafrarar had competed on this new tire. It was also the first time Caleb competed on a track with ‘rubbered up’ conditions, with over 250 competitors and the softer tires providing an immense level of grip around the 14 corners of the 1-mile circuit. Gafrarar qualified 13th and remained in the same spot through Heat #1. A great gain was made in Heat #2, driving up to seventh to start inside row four for the main event. During the warm-up, Caleb drove off the track to avoid hitting another driver after a sudden slowdown by the field in front of him. The nine-year-old pushed his kart back onto the track surface and rejoined the race, well behind the rest of the field. Gafrarar never gave up, determined to run the best he could and finished 17th in the 16-lap event. Sunday was an improvement overall, placing 10th in the main event. Caleb qualified 10th and was shuffled back to 17th by the end of Heat #2. Gafrarar gained seven spots in the main event for his third top-10 finish in four SKUSA races. 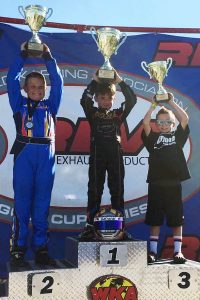 Two weeks later, the Caleb G hauler returned back to New Castle, this time for some 4-Cycle competition with the RLV WKA Gold Cup Series aboard his MGM chassis. Leading the championship standings and a victory in the last round, hopes were high heading into the August 5-7 weekend. Gafrarar borrowed an engine for Friday’s Sportsman ProGas Shootout. After qualifying first, Caleb was sidelined with a broken exhaust header after just a few laps in the main event. Putting back on the Briggs 206 engine for the remainder of the weekend, Gafrarar began Saturday in the fifth position for qualifying and ended there in the Prefinal. The set-up was there for the 15-lap main event, with Caleb able to post the most consistent lap times, closing on the leader in the final circuits. After coming up just short of taking the checkered flag first (0.079-seconds), Gafrarar was awarded the victory after a driving penalty was given to the provisional winner. Sunday began by advancing from fifth to third in the Prefinal, setting up for another run at the podium. Contact on the opening lap dropped him down the order, and Caleb was only able to reach the fifth spot by the checkered flag.

The fourth stop took Caleb to his father’s home state of Pennsylvania for the fourth event of the Bridgestone WKA Manufacturers Cup Series at the Pittsburgh International Race Complex. The weekend began with Gafrarar in the top spot, earning his second pole position of the season (1:02.223). Caleb was shuffled back at the start of Heat #1, ending up fifth and remained there for the second heat. Gafrarar stayed in the same position throughout the 14-lap main event, while earning the fast lap honor toward his fifth place finish. Round Eight of the championship series was a move forward day for Caleb as he continued to improve his overall pace. Gafrarar qualified sixth in a tough session as the track went from wet to dry just before his class hit the track, forcing a quick change from wet tires to dry tires on the grid. He gained one spot in the opening heat race, and was classified second after a penalty and strong performance in Heat #2. That placed him on the outside of the front row, which he took advantage once the green flag waved. Caleb held on around the outside of the opening corner and blasted away with the lead. He led the first 12 laps of the race until relinquishing the top spot as the white flag waved. Gafrarar made a final attempt to retake the position with a drag race to the checkered flag. In a photo finish, Caleb came two hundredths of a second short of earning the victory, settling for the runner-up position for his fourth podium in four WKA races.

Caleb G is now preparing for three championship finales over the course of three months. Up first is the Bridgestone WKA Manufacturers Cup Series final two rounds, returning to the New Castle Motorsports Park on September 23-25. Gafrarar is third in the standings with an opportunity to still battle for the title. The RLV WKA Gold Cup Series is heading back to the Carolina Motorsports Park in Kershaw, SC on October 7-9 with Caleb looking to remain on top of the standings at the end of the weekend. On November 16-20, it will be his first start at the famous Superkarts! USA SuperNationals in Las Vegas to complete the 2016 Pro Tour. The event is celebrating its 20th edition, and is sure to be an amazing event with Gafrarar looking to battle his way onto the championship podium by the end of SuperSunday.