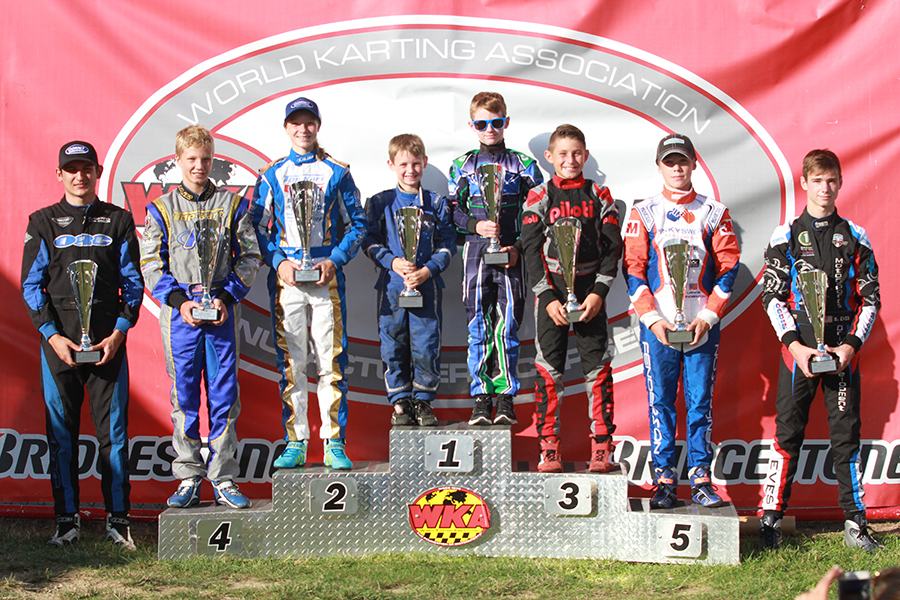 We spend our entire raceday up in the tower, watching every on-track session as we produce our EKN Trackside Live program, so not much time is spent roaming the paddock for the stories. The ‘From the Tower’ column is our chance to delve deeper into some of the stories that develop over a race weekend, those that may or may not have been included in the daily race reports. For complete coverage of the WKA Manufacturers Cup Series for the Pittsburgh International Race Complex event, visit the EKN Event Page – DC 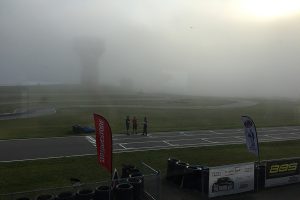 At my four visits to the Wampum, PA facility, it has rained each time. There has been no escaping the precipitation, and this time, fog helped to delay things on Saturday morning. Luckily, no rain fell on Friday or Saturday despite a high percentage of rain in the forecast. The rain hit Saturday night and early Sunday morning, leaving the new pavement wet for morning practice. All classes were run under wet conditions, with a large majority electing to skip the sessions. Qualifying began and the track was still damp enough for rain tires through the first four classes. Drivers then gambled with dry Bridgestone tires in the Pro Swift Sportsman, coming out much faster than the wet compound. Everyone in the following sessions made sure to strap on the dry compound, and the rain stayed away all day. The fog on Saturday reminded me of days at Daytona where you can’t see from one end of the facility to the other until the sun has burned away the haze.

The new pavement and the sealer laid down in the corners held up throughout the weekend. The grip level between the new pavement and the sealer challenged both the drivers and tuners. If you went off line in any of the high speed corners, you were pushed out into the marbles and lost positions. The layout continues to be among the most challenging in the country. Placed alongside a tall hill, the elevation changes in turn three and turn 10 are the signature corners. It certainly separates those who have the right setup and those who don’t. 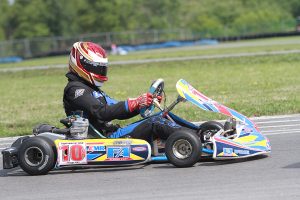 Jacob Donald jumped back on the winning wagon, taking both in Pro IAME Senior (Photo: EKN)

For the third straight weekend at the WKA Manufacturers Cup Series, the main events were dominated by one driver. Ryan Norberg, in his only WKA start of the season, won both features at GoPro Motorplex. In July, Braden Eves swept the weekend at his home track in both IAME and Yamaha. In Pittsburgh, another driver defended his hometurf with the victory each day. Jacob Donald had gone over a year without taking the top step of the podium, since the WKA event at GoPro in 2015. The KartSport North America driver has seemed to struggle throughout the 2016 season, with a move over to the FA Kart sparking a resurgence in his performance. Donald was able to take advantage at the key moments of the weekend. On Saturday, he remained in the top-three all day, winning the second heat race and was then able to drive away from the field and Senior rookie Ryan Raffa. It was similar on Sunday, putting himself P3 for the main event grid. After two false starts, Donald was moved to the pole position. That re-positioning, and contact in the opening laps, allowed him to pull away and cruise to the second victory of the season, earning the $1,000 payday for finishing first in the overall weekend point total.

The performance has also given him an outside chance at the title chase heading to the season finale at the end of September. Eves leads Round Two winner Brandon Jarsocrak with Senior rookie Brandon Lemke in third. Lemke has yet to stand on top of the podium in the category this year in WKA competition. Former champion Alexander Kardashian is fourth, looking for his first victory of 2016 in an effort to close in on the top spot in the final two rounds.

Championships Still Up for Grabs 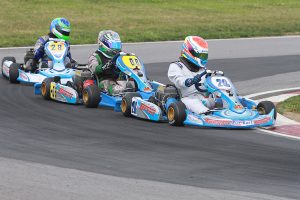 With the WKA Manufacturers Cup Series championship counting the best seven of 10 rounds, there is plenty of room for things to change during the finale weekend. Yamaha Senior is really down to three drivers with Braden Eves leading Brandon Lemke and Dakota Pesek. The three battled for the victory on Sunday, with Pesek winning in a photo finish for his second of the year. Eves has three, while Lemke has just one. The driver to come out of New Castle with the most wins is likely to be crown the champion.

Yamaha Junior is very similar as the three drivers fighting for the win all weekend in Wampum are the same drivers fighting for the championship. Pauly Massimino is the top driver still with Tyler Ferris closing in thanks to his first victory on Sunday. JP Southern missed Daytona and one round in Mooresville, but thanks to the three drop races and his four wins, Southern is in the championship hunt heading to New Castle. It is uncertain if he will be there next month as another foot surgery could be on the horizon for further repair from the November accident.

Southern has grown, both physically and mentally, in the last year. The Ohio driver for Top Kart USA did double duty in Pittsburgh with the Yamaha Junior class at the Alan Wilson Circuit and in the Lucas Oil School of Racing Race Series on the 2.8-mile full circuit. Southern added two runner-up finishes in the first two rounds of the formula car series, which is set to resume at Lime Rock Park in October. This new program is a great avenue for young drivers looking to learn about formula car racing, with one or two-day schools along with the racing series to bring racers up to speed with wheel-to-wheel action.

Massimino is also the point leader in the Pro IAME Junior divisio, despite not winning a main event in the eight rounds of racing. With the drops, three-time winner and $500 winner at Pittsburgh Lance Fenderson, along with Round Seven victor Myles Rowe, are in a position to challenge for the title should they attend the finale weekend. Rowe missed Daytona while Fenderson skipped the first New Castle weekend. 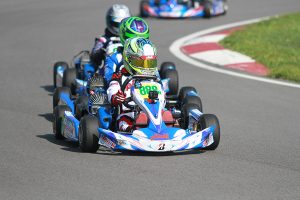 Madison Campeau and Luca Mars got their start at the Pittsburgh International Race Complex facility in Kid Karts as both call the Pittsburgh area home. Today, they are now WKA Manufacturers Cup Series winners in the Cadet division and lead the championship in their respective classes. Campeau has been on the verge of that first major victory for the past two years, no more so than this year in the Yamaha Sportsman division. A runner-up in Mooresville was followed by another in New Castle. Things did not look hopeful on Saturday after getting shuffled back to 11th in an intense Heat #1. She kept her composure and fought back to fourth in the second heat, helping to move her closer to the front in the main event. A great start kept her near the lead pack, and a last lap move secured the first ever Manufacturers Cup victory, and the first by a female driver since the last by Ashley Rogero a few years ago. A runner-up finish on Sunday puts her at the top of the standings heading into New Castle.

Mars became a first-time winner in the Pro Swift Sportsman division in a dominating fashion, taking home the $500 weekend cash prize from IAME. After earning a rookie title in 2014, the Pittsburgh driver scored a win last year in the TaG Sportsman division and opened up 2016 with a triumph in Yamaha Sportsman in Daytona. Mars had gone winless in the IAME class this year, circling the Pittsburgh weekend as his best chance to land on top of the podium. Luca led 54 of 60 laps on the weekend, winning all four heat races and earning the two main event victories. The only session Mars did not come out in the first position was Saturday qualifying. His two victories continued the streak for the Benik chassis, having won five of the six main events at the major races in the month of July. Now Mars has just a five point advantage in the title chase ahead of the one driver who bested him in Pittsburgh – Connor Ferris.

The September 23-25 weekend at New Castle Motorsports Park in Indiana is the deciding two rounds for the WKA Bridgestone Manufacturers Cup Series championship. The calculators will be at work come Sunday as parents and racers try to figure out what is needed to claim the championship trophy.