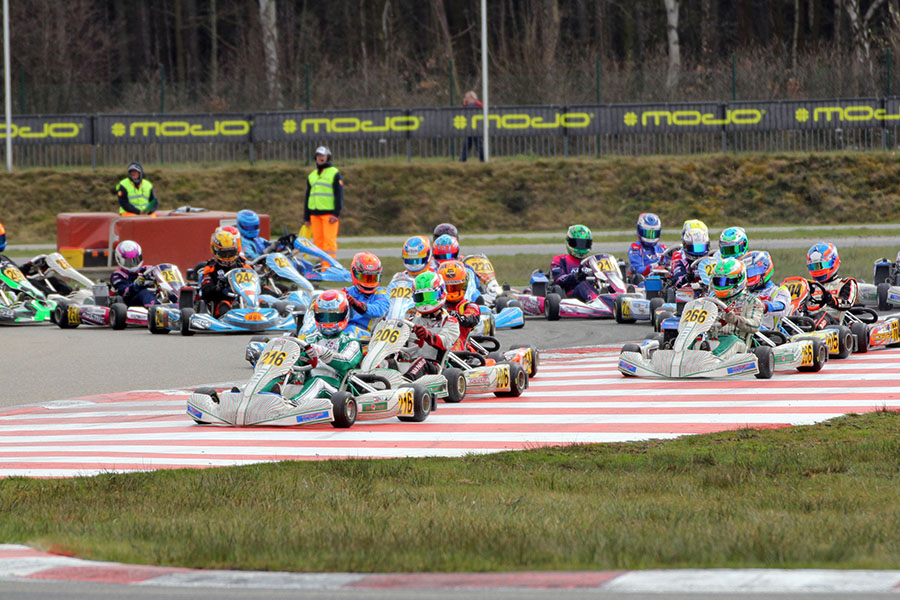 The 2016 ROTAX MAX Euro Challenge is ready for its big showdown: after races in Belgium, Italy and Spain, the 2016 tour of Europe’s unique ROTAX-series ends in France. From August 24th to 28th Sologne Karting in Salbris marks the last stop of the year, welcoming international grids in the categories of junior, senior and DD2.

On the 1.500 metres long circuit, the championship will be decided. Although some categories were already decided at Zuera, the champions will be crowned on French soil officially. Moreover the battle for vice titles and the hard-fought ROTAX Grand Finals tickets guarantees some thrilling action for the big finale …

In the junior category Frenchman Axel Charpentier (Strawberry Racing) wrapped-up the championship already in Spain. He won five out of four races this season, which makes him uncatchable at Salbris. But the vice championship has not been decided yet and will be a close fight between the British duo Mark Kimber (Strawberry Racing) and Oli Caldwell (KR Sport). Both are separated by only one point. But even Glenn Van Berlo (Hugo Motortsport) should not be underestimated. The Dutchman has proven to be a regular candidate for the podium and wants to redeem himself for a unlucky weekend at Spain.

When it comes to the senior championship Austria’s Nicolas Schoell (Strawberry Racing) could celebrate the overall victory at Spain, since his championship contenders experienced a topsy-turvy weekend at Spain. Only very extraordinary circumstances could influence Schoell’s triumph at Salbris, which is why the focus is set on the runner-up position. Best chances for the vice championship has Gary Donnelly from the UK, who then would make for a double success for Strawberry Racing. But Dutchman Rinus van Kalmthout wants to foil the Brits plans. His aim is to defend his vice title from 2015. Finally one should not underestimate Glenn van Parijs (Bouvin Power). The man from Belgium showed very consistent results and could be the big surprise during the finale at France.

The situation in the DD2 category could not be more exciting: After the Spanish round at Zuera, the championship changed dramatically and became really close: By his double triumph Hungary’s Ferenc Kancsar (VPDR) improved to second place in the table. Equally Kevin Ludi (Spirit Racing) conquered the top again. The Swiss leads by only 12 points ahead of Kancsar, which is not much with regard to the drop-score-system. The following drivers Constantin Schoell (Daems Racing) from Austria and Poland’s Lukasz Bartoszuk (CRG SPA) are not in the position for the total triumph any more, but still have a theoretical opportunity to win the vice championship

As for the special classification of DD2 Masters, Martin Pierce (Uniq Racing Team) is in control. After another successful weekend at Zuera, the Irishman increased his championship lead and is uncatchable in front. Under normal circumstances his overall victory is sealed. Behind him Slawomir Muranski (Wyrzykowski Motorsport) from Poland, Ilja Aloskins (Team Victoria) from Latvia and Richard Faulkner (Uniq Racing Team) from Ireland are expected to settle the runner-up position. But for Salbris they have to watch out for Frenchman Christophe Adams (Christophe Adams): on home soil the BirelART driver has regularly proven to be the benchmark.

The big finale will have a few magical moments in store and will be a non-miss event, everybody is invited to join: RGMMC offers a full range with live streaming, live timing and social media coverage. More information regarding reports, photos, results and live TV stream are available on the official websites www.rotaxmaxeurochallenge.com or www.telemundi.com.