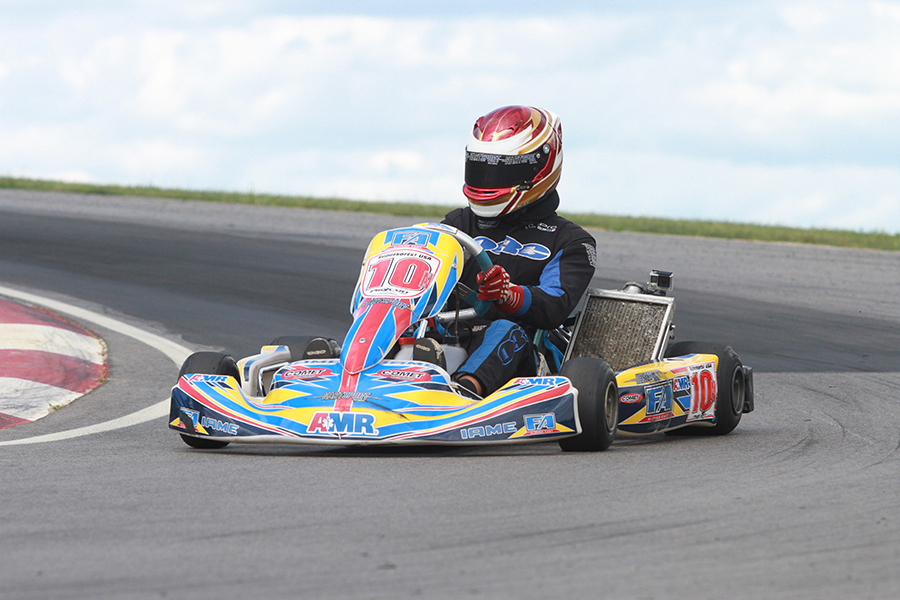 Sunday completed the fourth event of the 2016 Bridgestone Manufacturers Cup Series, completing the eight championship round. The Pittsburgh International Race Complex provided a great challenge all weekend long for the Grand Products Nationals, including rain early in the morning. The precipitation ended before warm-up began, however, the wet track lasted until midway through qualifying. That put the first four classes on wet Bridgestone tires before everyone switched back to the slick compound. The sun eventually came out to provide a picture perfect background for the main events. 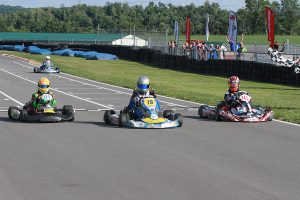 It was a toss up all day long in the KartSport North America Pro IAME Senior division. Brandon Lemke (Merlin) began the search for his first victory of the series with pole position in the wet. He relinquished the top spot to Braden Eves (Kosmic) in the first heat, with Brandon Jarsocrak (Praga) taking over in Heat #2. Eves and Jarsocrak earned the front row until two false starts dropped them to row two, moving Saturday winner Jacob Donald (FA Kart) and Alexander Kardashian (Top Kart) on the front row. Donald took advantage and got away early as the field bunched up behind him, including Eves jumping on the bumper of Jarsocrak. That created a bottleneck in turn four-five, sending the field scattering. Abby McLaughlin (Top Kart) and Kardashian came away with second and third, eventually run down by Jarsocrak. Donald kept the steady lead throughout the 16 laps, securing his second victory to grab the IAME USA $1,000 payday. Kardashian was quicker late in the race, stealing the runner-up position on the final lap for his best finish of the year. Jarsocrak took third with Eves and Lemke climbing back into the top-five to put McLaughlin sixth. 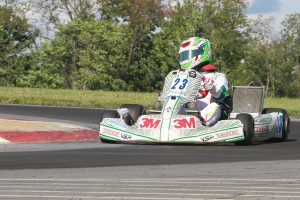 Braden Eves (Kosmic) was attempting a fourth straight victory in the Fullerton Karts USA Yamaha Senior division. The Saturday winner started out on the right path, taking qualifying and earning the win in both heat races ahead of Alexander Kardashian (Top Kart). Brandon Lemke (Merlin) started third, and was able to help push he and Eves away from the rest of the field until Dakota Pesek (Top Kart) joined them. Eves led with Lemke taking over the point on lap seven. That triggered the chess game for the top spot as they sized each other over the remaining laps. Pesek positioned himself into the second spot, and set up a run to the checkered flag. At the checkered in a three-wide effort, Pesek reached the line first by 67 thousandths over Eves and Lemke for his second victory of the season. Kardashian drove alone in fourth as Derek Hughes made it three Top Kart drivers inside the top-five.

Lance Fenderson secured his third victory of the season in Woltjer Racing Engines Pro IAME Junior class. Pauly Massimino (Top Kart) was the top challenger on the day, splitting the heat wins with the Tony Kart driver. Fenderson was able to get away in the main event early and went the 16 laps unchallenged to a 3.6-second advantage. The battle was for second, which included a charging top qualifier Myles Rowe (Tony Kart), who started eighth. That was until he retired with a mechanical issue on lap 14. Gage Rodgers (PCR) positioned himself in the runner-up spot late, holding Rowe off first and was able to pull away from Pauly Massimino (Top Kart) for his best finish of 2016. Max Peichel (Top Kart) drove to fourth with Dalton Peak (Top Kart) fifth for his best finish in four starts. 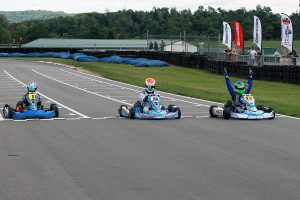 It was an epic battle in the FranklinKart.com Yamaha Junior category, going down to the wire. Heat race winners JP Southern and Pauly Massimino were joined by Top Kart teammate Tyler Ferris. The trio broke away after a solid group of eight made up the early lead pack. Once the trio got away, they fought for the lead. On the final lap, Southern secured the lead in the first half of the lap. It looked as if he was able to establish a big enough gap, but both Ferris and Massimino closed up heading to the checkered flag. In a three-wide run to the checkered, Ferris was able to cross the line first to earn his inaugural class victory. Southern and Massimino completed the podium with Brody Warren (Tony Kart) fourth and Marina Walters (Top Kart) fifth.

Luca Mars capped off the weekend at his home track with a sweep in the IAME USA East Pro Swift Sportsman class. Mars led the way from qualifying to the final checkered flag. Mars looked to have the main event in had after winning both heat races, until a late charge by Connor Ferris (Top Kart), who started sixth. Ferris set up for a final run on the Benik driver, with Mars able to reach the checkered flag first for the victory. Ferris recorded his best finish since winning in Daytona. Brent Crews (Energy) bounced back from a wreck in a heat race to drive his way to third, ahead of Gunnar Bischoff (Benik) and Logan Adams (FA Kart). 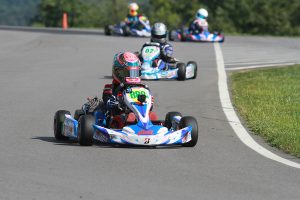 The Adams brothers set the tone in the Allison Racing Engines Yamaha Sportsman category, each taking a win in the heat races. Garrett Adams (FA Kart) had the better qualifying effort over Logan Adams (FA Kart), giving him the pole position for the main event. Saturday winner Madison Campeau (Top Kart) started third, and joined the two at the front away from the rest of the field. Logan lost the draft to leave Garrett and Campeau to decide the victory. Adams led with Madison right on his bumper the entire time. On the final lap, Campeau made her move as they entered the back half of the track. Adams was able to separate himself and reach the checkered flag with ease for his two victory of the season. Campeau finished second, securing the overall win for the weekend. Logan drove to third to put all three of the same drivers back on the podium as Saturday. Kaden Wharff (Top Kart) advanced from eighth to fourth with Caleb Bacon (Parolin) in fifth. 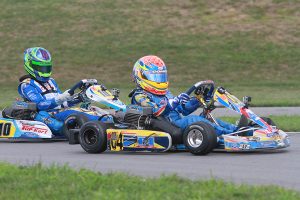 The field in CRPRacing.com Mini Swift stepped up the game Sunday, challenging Saturday winner Jeremy Fletcher (Kosmic). Eli Trull (Fullerton) landed the fast time in qualifying before Fletcher scored the win in Heat #1. Trull was the provisional winner in Heat #2 until he was placed behind Fletcher for contact, giving Alex Powell (Birel ART) the race win. Fletcher still earned the pole position after the heat points was calculated. A clean start began the 14-lap main event with Caleb Gafrarar (Parolin) jumping from fourth to first in the opening circuit. Fletcher locked on his bumper and the two pulled away from Trull. Fletcher made his move with two laps remaining, and while Gafrarar attempted to retake the spot, it was not to be. Gafrarar made a last attempt with a drag race to the checkered flag with Fletcher earning the victory by two hundredths of a second over. Trull ran solo in third as Frankie Iadevaia (FA Kart) and Danny Dyszelski (Vemme) completing the top-five.

The Water for a Cause Kid Kart class belonged to Indy Ragan on Sunday. Saturday winner Tristan Young set the pace in the wet qualifying session and Ragan turned the table when the track dried out. Ragan drove away to the win in both heat races and then set sail in the main event to a 12-second advantage for his second victory of the season. The battle for second went down to the wire, with Austin Olds able to edge out CJ Bowman for the position. Dusty Larson beat Aubrey Adams for fourth.