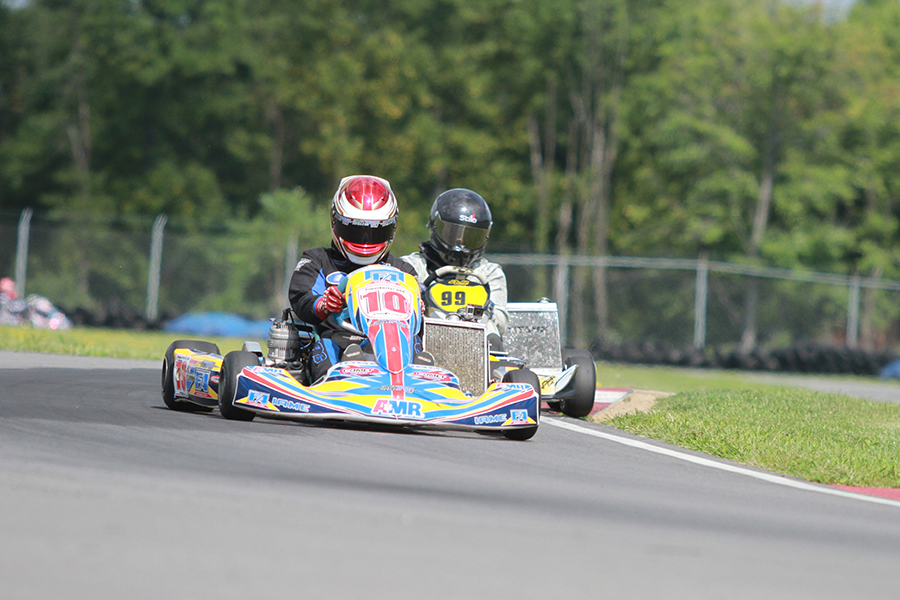 The seventh round of the Bridgestone WKA Manufacturers Cup Series completed Saturday at the Pittsburgh International Race Complex in Wampum, PA. The threat of rain stood throughout the day with only a small sprinkle rolling in as the mains began but sunshine continued as the small cloud moved away. A thick fog delayed things in the morning with the WKA staff able to get the event back on schedule with no major issues or incidents after qualifying, two heat races and a main event for all eight categories. The challenging Alan Wilson Circuit separated the strong from the weak, while also giving a handful of drivers their first career win or first win of the season.

Braden Eves won both main events in the KartSport North America Pro IAME Senior class at New Castle and looked to be on his way to a third straight win. Eves (Kosmic) topped the qualifying session and drove the win in Heat #1. The field got the jump on Eves to start Heat #2, including Jacob Donald (FA Kart) and Ryan Raffa (PCR). Raffa led the way until Donald took the lead at the end to score the win while securing the pole position for the main event. The pole position was all he needed as Donald led all 16 laps for the victory. Raffa stayed close and challenge around lap 12, with slight contact dropping the PCR driver down the order. This gave Donald a clean run to the checkered flag. Brandon Jarsocrak (Praga) made it a KartSport NA 1-2 finish with Brandon Lemke (Merlin) keeping Eves off the podium. Alexander Kardashian (Top Kart) rounded out the top-five. 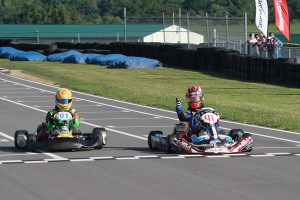 Brandon Lemke and Braden Eves set themselves as the top drivers in the championship with their performance Saturday in the Fullerton Karts USA Yamaha Senior class. Each took a turn at the point throughout the day, pulling away in the main event to settle the victory between the duo. Eves led the majority of the race but in the end, Lemke looked to have control of the top spot. The final lap was another battle, coming down to a photo finish. Eves reached the checkered flag first by 56 thousandths of a second over Lemke for a third straight victory. Alexander Kardashian (Top Kart) ran alone in third with Nick Landi (FA Kart) working past Derek Hughes (Top Kart) at the end for fourth.

Myles Rowe made his 2016 WKA debut memorable, securing the victory in Woltjer Racing Engines Pro IAME Junior. Top qualifier Lance Fenderson (Tony Kart) retired in Heat #1 after a flat tire, opening the door for Rowe to take over. The Tony Kart driver did exactly that, winning both heat races and leading all 16 laps of the main event. It was a good points day for championship leader Pauly Massimino (Top Kart), placing runner-up ahead of Max Peichel (Top Kart). Fenderson drove his way forward in Heat #2, improving up to fourth by the end of the main event with Gage Rodgers (PCR) fifth.

JP Southern scored his fourth straight victory in the FranklinKart.com Yamaha Junior category. It was a busy day for the Top Kart driver, competing on the Alan Wilson Circuit along with the car track in the Lucas Oil School of Racing. Thankfully both programs scheduled worked out to not miss any sessions, placing second on the big track in a great battle just before the WKA main event. Point leader Pauly Massimino (Top Kart) was able to secure the pole position for the main event after landing fast time in qualifying and the opening heat win. Southern drove the win in Heat #2, securing the outside pole position. Southern took the lead after lap two, and never relinquished the spot. Massimino trailed in second until Tyler Ferris was able to slip by on the final lap for the spot, making it a 1-2-3 for #RollBlue Top Kart. David Kalb (Tony Kart) kept with the lead group early, losing the draft to hold fourth position solidly with Arie Venberg (Merlin) placing fifth. 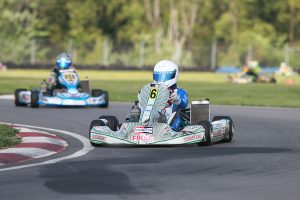 The day belonged to local star Luca Mars in IAME USA East Pro Swift Sportsman. Mars (Benik) was the dominate driver all day but was challenge in each session. Eight-year-old Brent Crews (Energy) was right there throughout the day and were joined by Top Kart drivers Madison Campeau and Connor Ferris in the main event. The 14-lap main event was a great battle with a number of passes and respectable driving. Mars relinquished the lead just one lap, with Campeau leading across the line once before Mars reclaimed the spot. The battle for second allowed Luca to pull away and score his first victory of the season. Campeau won the fight for second over Ferris and Crews with Logan Adams (FA Kart) placing fifth.

The Adams brothers set the tone in the Allison Racing Engines Yamaha Sportsman class with Logan (FA Kart) topping the charts in qualifying and winning Heat #2 while Garrett (FA Kart) won Heat #1. Adams spun on the opening corner of the second heat and drove his way back to seventh, putting him third in the main event grid behind Logan and Caleb Bacon (Parolin). It was Bacon setting the pace in the 14-lap main event with both Adams and Madison Campeau (Top Kart) in tow. As the laps closed up, Campeau was on the charge and put herself on the bumper of Bacon. Coming out of the back section of the track, Campeau and Garrett slid past Bacon and began drag racing to the checkered flag. Campeau was able to reach the line first, taking her first WKA victory. Adams was just 34 thousandths off in second with Logan ahead of Bacon. Thomas Schrage (Tony Kart) won the battle for fifth. 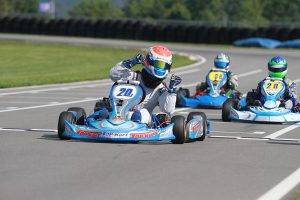 It was a finish like no other in CRPRacing.com Mini Swift. Jeremy Fletcher (Kosmic) was the class of the field, recording both heat race wins after qualifying sixth. The lead group was five in the main event, all looking to take down Fletcher. Point leader Eli Trull (Fullerton) set himself as the top challenger, taking the lead away toward the end of the race. Fletcher retook the position and was able to break away. In the closing laps, Trull and Alex Powell (Birel ART) worked together to close back in on Fletcher, setting up for a wild last lap. Trull and Fletcher went side-by-side to the checkered flag crossing the line at nearly the identical time. It went down to the 10 thousandths mark in the difference, with Fletcher scoring the win over Trull. Powell completed the podium with Danny Dyszelski (Vemme) and top qualifier Caleb Gafrarar (Parolin) making up the top five.

A two driver battle took place all day in the Water for a Cause Kid Kart division. Tristan Young was able to lock up the fast time in qualifying but it was Indy Ragan scoring the wins in the heat races. The two continued to square off in the 10-lap main event, this time with Young able to hold off Ragan to claim his first victory since Daytona. Point leader Ragan settled for second with Aubrey Adams completing the podium. Austin Olds drove to fourth with Dusty Larson in fifth.