Round Five of California ProKart Challenge Set for Santa Maria 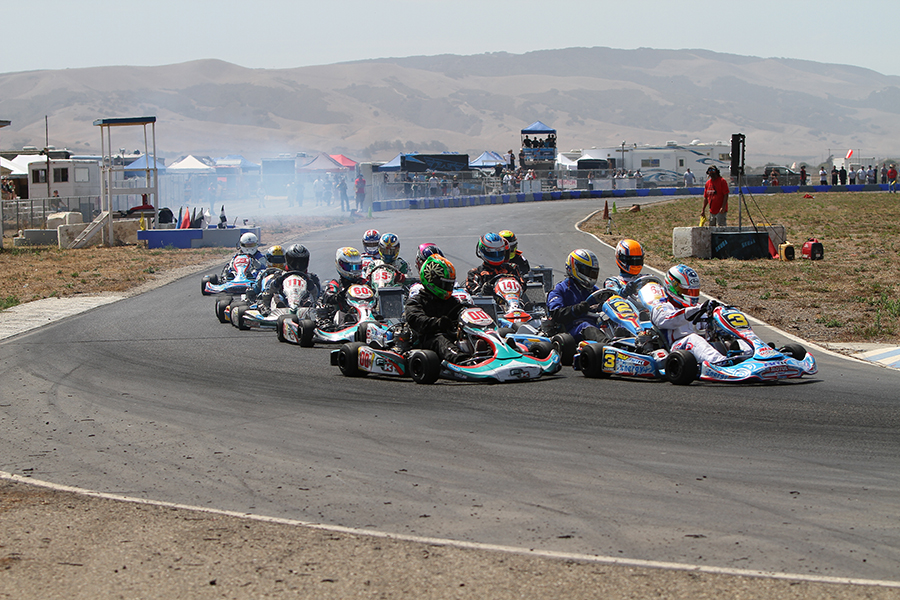 The California ProKart Challenge returns to the Santa Maria Kart Track for the first time since 2012 (Photo: DromoPhotos.com)

Over two months have gone into the books since the last California ProKart Challenge event. Racers took on the challenging Simraceway Performance Karting Center in Sonoma before taking the month of July off for the record-breaking SKUSA Pro Tour SummerNationals in Indiana. Now, racers along the west coast are preparing to resume the championship chase at the flagship Superkarts! USA regional program. Just up Highway 101 northwest of Los Angeles is the Santa Maria Kart Track, hosting the California ProKart Challenge on August 26-27. This track, set on the grounds of the Santa Maria airport property, is both historic and challenging, having been around for ages and boasting a tight, technical layout. Attendees can also look forward to a welcome relief from the current summer heat, as Santa Maria is a destination location, calling for beach weather in the 70’s and popular attractions and restaurants, with a specialty for steak houses.

A former champion is set to add another title to his CV, with Billy Musgrave and Jarred Campbell the top two contenders in the 2Wild Karting S1 Pro Stock Moto championship chase. Musgrave started out the year strong with a victory and two runner-up finishes. Defending champ Jarred Campbell is coming on later, placing first and second in the last two events. Just 119 points separate the two with a lot of racing still left in the upcoming two rounds. Musgrave has become the first in California PKC history to be leading both headline divisions, currently sitting P1 in the Phil Giebler Racing X30 Senior standings as well. Not yet earning a victory, two runner-up finishes are the best by Musgrave after four rounds of racing. Round Four winner Nicky Hays and Round Three victor Matt Johnson are the top challengers heading to Santa Maria.

It is still anyone’s championship in the Leading Edge Motorsport S2 Semi-Pro Stock Moto division. Hunter Pickett picked up his first win at Round Three, and remains the championship leader ahead of S2 rookies Hunter Kelly and last year’s SKUSA Pro Tour S5 champ Callum Smith – who has two wins in 2016. Robert Marks is now the championship leader in the the Nash Motorsportz S4 Master Stock Moto standings after Alan Michel missed Round Four. He has fallen to third behind Gianfranco Casadei, with the drop race a determining factor next month at the series finale.

The same scenario could play out in the Vemme Kart/Extreme Karting X30 Master class with John Crow leading the standings over Mike Rolison. The two-time winner missed Round Three, and only trails the other two-time winner Crow by 145 points. Tim Meyer remains close in third with this championship set to go down to the wire. Defending Mike Manning Karting S4 Super Master Stock Moto champion Ken Schilling remains at the top of the standings with Darrell Tunnell picking up his first win at the Sonoma event, looking to close in at the last two events of the year.

Dante Yu has two wins on the year and maintains a solid lead in the Ryan Perry Motorsport X30 Junior category. Tomas Mejia and Oliver Calvo are the top two challengers for Yu heading into the final two rounds of the season. Just 26 points separate Royal McKee and Garrett McKelvie in the Outsource Utility Contractor S3 Novice Stock Moto class. McKee has two wins in the last three rounds, with McKelvie the winner at the season opener. Dean Heldt has a comfortable lead in the RPG S5 Junior Stock Moto division.

The gap in the Professional Kart Support Mini Swift point lead for defending champion Anthony Willis shrunk after Sonoma, with Jace Jones picking up the highest point total for the weekend. The margin is now 150 points with two events remaining. Each has a victory with Willis holding on to two runner-up finishes, which could come into play during a tie-breaker. Kai Sorensen missed out on his first SKUSA Pro Tour victory last month in Indiana, but remains the driver to beat at the California PKC in the Top Kart USA Micro Swift class. His lead is 305 points, with Kailey Meris and Cooper Hunt the top challengers.

Race pre-entry remains open until Tuesday, August 23 at the online registration section of the Superkarts! USA website – offering the discounted price of $325 for entry and stamped race tires. Move-in begins on Thursday, August 25 at Noon, with PKC also offering an ‘early-bird’ check in for drivers and spectators from 3-6pm. On Friday, the California PKC registration desk opens at 7:00am, with the official practice day beginning on track at 9:00am and running until 5:00pm. Pit spots can be reserved prior to this event for $30 per spot, with the rest of the paddock set up on a first-come, first-served basis. Camping spots are also available for $50 per spot, and can be reserved with pre-payment thru www.skusastore.com. A variety of hotels are in the area for California PKC competitors to select from. Additional event and track information is available at the California PKC Event Page.

New for the Santa Maria weekend for California ProKart Challenge is separate registration lines for driver and spectator check-in. Spectators and other non-drivers can purchase 1-Day or 2-Day PKC pit passes on Eventbrite. This program offers many different options for purchasing tickets to provide an easy process when entering the paddock. Find out more about the program at the following LINK.

Superkarts! USA would like to remind racers that Stock Honda engines MUST have an airbox. Spec fuel and oil are not provided by PKC, so please plan accordingly to pre-order from your local kart shop or by bringing a sufficient supply of both for the weekend. Don’t forget to stick around after all the on-track activities have completed for the post-podium raffle drawings. Superkarts! USA handed out more than $4,000 in prizes at the first four events.