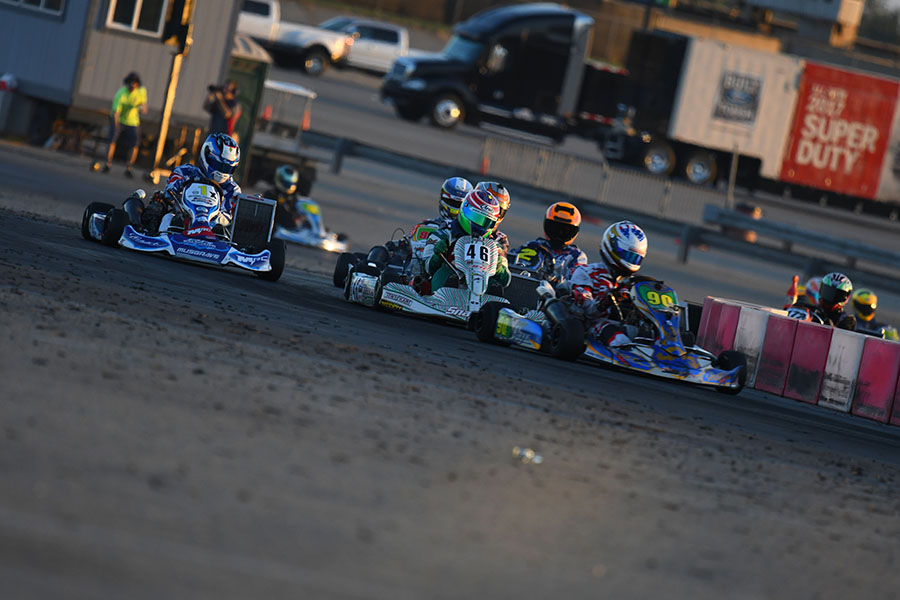 It was another hot weekend in southern California as the Los Angeles Karting Championship hosted its seventh event of the 2016 season. Drivers from all over the west coast gathered at the CalSpeed Karting Center in Fontana, California on August 13-14 to contest the ‘Classico Clockwise’ layout. Following the Saturday practice day, LAKC hosted its second ‘Pro Show’ featuring the top shifterkarts and TaG competitors racing for cash prizes. Sunday was a full day of racing with the remainder of the LAKC class roster continuing their championship chases under extreme sunshine with temperatures into the triple digits.

The 2 Wild Karting X30 Pro division welcomed 20 drivers for the Saturday evening event with Nicky Hays edging out inaugural Pro Show winner Jake Craig in qualifying by eight thousandths of a second with a 38.054-lap. Each took a win in their separate heat races, setting up for a show down in the main event. Craig and Hays were the class of the field, with Craig showing the way the majority of the main event. Hays took the lead for just one lap, as Craig took the victory and the $850 payday for the victory. Hays settled for second with Christian Brooks ending up third on the podium. Carlee Taylor was fourth with Jesus Rios Jr. in the fifth position. 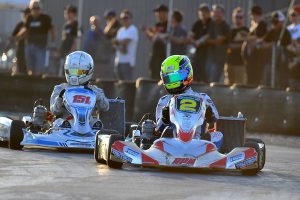 The shifter side of the Pro Show was a combined group of the Baldozier Racing S1 Pro Stock Moto, CRG SoCal S2 Semi-Pro Stock Moto and Phil Giebler Racing Open 125 Shifter divisions to make up a solid group of 21 drivers competing in the similar format. All three divisions were represented at the front of the field with S2 driver Dekota Fripp leading the way early until Open pilot Slava Prikhodko took over. He led until a charging Billy Musgrave was able to work himself into second and reel in Prikhodko. Taking the lead on lap 10, Musgrave showed the way for the remainder of the 25-lap event for his second Pro Show victory and win in the S1 division. Dekota Fripp took second overall, winning the S2 class with Open going to third place finisher Troy Butts after Prikohdko was shuffled outside the top-five. Callum Smith recorded the fourth spot with Matias Podboj in fifth.

The 2Wild Karting X30 Intermediate welcomed another new winner with Aidan Yoder coming through for the victory. The day began with Gino Alfonso-Macauley setting fast time in qualifying while Dylan Palatin won the Prefinal. Palatin was shuffled back and eventually retired early in the main event, opening the door for Gino to take back the top spot. Yoder was charging through the field and was able to take over the point on lap 14. He led the remaining laps to reach the checkered flag first. Alfonso-Macauley crossed the line in second, but was disqualified for advancing his position prior to the green flag. That advanced Michel Manning to the second position ahead of Joey Paonessa, putting two female drivers on the podium. Menwa Arakelian drove to fourth with Jared Patterson in fifth. 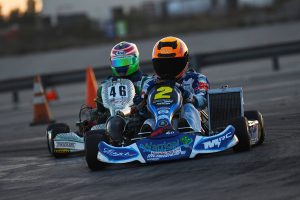 Carson Morgan was able to secure his second victory on the season in the P1 Engines Mini Swift division. Morgan made it look easy against the 19-driver field, leading the entire distance of the event. After setting fast time in qualifying, Carson led all 10 laps of the Prefinal before going wire-to-wire in the 18-lap Final for the victory. The battle for second went to Daniel Inzunza, ahead of Kasey Gillis, Dominic Gorden and Dakota Tate. Morgan added a second victory on the day in the Fleming Racing Engines Junior 1 Comer division. This class was a battle all day with championship contenders Cole Keith Cotham and Aden Dodge. Cotham took top honors in qualifying with Morgan edging out Dodge for the Prefinal win. Several laps of shuffling for the lead in the main event resulted in Morgan securing the position after the halfway point, driving away to a six tenths advantage over Dodge. Cotham finished third with Dakota Tate and Sheldon Andrews completing the top-five.

Joseph Daniele helped his cause in the Ryan Perry Motorsport X30 Junior championship chase with his second victory. Just three drivers have won over the seven rounds at the LAKC with Daniele earning his second to match Trey Brown while point leader Ryan Schartau holds three. Brown set the pace early with fast time in qualifying, edging out Daniele by just three thousandths of a second. At the end of the Prefinal, Brown once again beat out Daniele for the top position at the checkered flag. Brown led the first five laps of the final with Daniele taking over the point. From there, it was all Daniele going on to score the victory by a slim 67 thousandths ahead of Brown. Zoey Edenholm stood on the podium in third, making just her second start of 2016. Championship leader Ryan Schartau was fourth with Keawn Tandon in fifth.

Mike Manning Karting TaG Master point leader John Crow returned to his winning ways with a sweep of Round Seven. Crow led throughout the day against the 12-kart field, showing the way for all 28 laps of racing after securing the fast time in qualifying by two tenths of a second. The win was his third on the season, holding off two-time winner Erik Jackson throughout the day. Brian Phillipsen drove to third over Tony Rossetti and Gary Lennon. Brenden DeLorto became the fifth different winner on the year in the Mack Motorsports PRD Junior 2 class. DeLorto took over the lead late in the Prefinal from top qualifier Mia Butts to score the win, and then went on to lead all 18 laps for the main event victory. Ricco Shlaimoun won the battle for second over Brendon Cramer. Point leader Jordan Turner finished fourth with Pierce Sullivan in fifth. 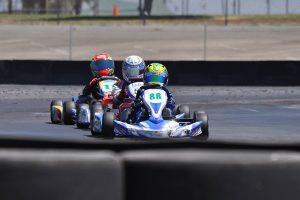 The Musgrave Racing Company S3 Novice Stock Moto division went down to the wire with Adrian Yong coming through to claim the victory. Prescott Campbell was en route to scoring the victory having earned fast time in qualifying and winning the Prefinal. Campbell led the first 17 laps of the main event, suffering a blown tire on the final lap to put him on the sidelines prior to the checkered flag. Yong was able took the checkered flag for his first victory of the season. Point leader Royal McKee drove to second ahead of Garrett McKelvie with Trevor Sumner and Indy Sandoval completing the top-five.

It was a battle all day long in the Empire Karts Micro Swift division. Enzo Deligny set fast time in qualifying with AJ Matheson scoring the win in the Prefinal. Point leader Cooper Hicks sat inside the top-three during the first two sessions, jumping into the lead battle during the main event. Matheson and Hicks went back and forth throughout the first half of the 18-lap race. Hicks secured the lead and led the remaining laps for his fifth victory on the year. Matheson was just 86 thousandths short of the victory with Frankie Mossman in third. Jesus Vasquez Jr. was fourth with Austin Manka in fifth. 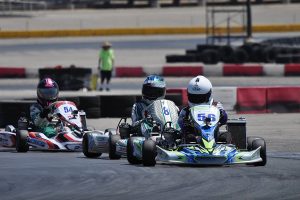 Logan Chambers swept the action in the freem Honda Kid Kart category for his second victory of the season. Chambers nearly led the entire distance on the day, pacing the field for seven of the eight laps in the Prefinal before showing the way for all 10 laps of the main event victory. Point leader Logan Ainsworth placed second ahead of Drake Cardey to complete the podium. John Antonino and Brodey Vicars rounded out the top-five. Larry Hayashigawa became a first time winner in the Professional Kart Support S4 Super Master Stock Moto division. A longtime TaG driver, Hayashigawa swept the day to secure his first victory on the year. Championship leader Chris Curtis was second over Carl Lewis.