Summer is in full swing across the country and that means heat, heat and more heat. July is a hard month to get motivated to race. Everyone is heading to the beach, out of town or firing up the BBQ’s; but at the third Round of the Tri-C Karters 2016 season, it was blue skies, free sno-cones, and a party in the LO206 Lounge which equaled a great day of racing!

With the growth of the LO206 program, Tri-C Karters welcomed R.L.V. USA as a class sponsor. RLV will be raffling off a free set of tires to a lucky LO206 class participant at each race for the remainder of the season. Congratulations to the #11 kart of Ulysses Washington III, the winner of the 1st set of tires raffled off this season, thank you Rod and the rest of the R.L.V. team. 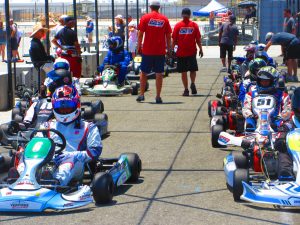 It is always great to see new faces at the track — seeing their eagerness to learn and their excitement for the sport is always refreshing and a great reminder of where we all started out!

The day’s warm, but not too warm, conditions made for some great competitive racing on the Sportivo configuration. Tires and engines got up to temperature quickly and the focus shifted to strategy and chasing down the checkered flag! With only 3 races left on the calendar, many drivers are battling for every championship point.

Full Throttle Karting – TaG Masters: Always a fun class to watch with experienced drivers; while the 102c of Tony Rossetti set the fastest lap in qualifying, it was the 620 of Paul Bonilla taking the win with 27 – Roy Steele in second and 326c of Trevor Graegin in third.

SeventhGear.com – TaG Mini: The future of the sport and probably the most serious competitors. Lanie Benjamin in the 77c was fast all day but was relegated to the 2nd place spot in each session. Ethan Ho in the 168 dominated the main, Lanie Benjamin finished 2nd and the 010 of Ayden Aquino rounded out the top three.
Team T Racing – World Formula: Veterans of the sport, these racers are out to win but make it look effortless while doing it. The 87 of John Lonero was battling for the lead spot all day but his day ended on lap 11 of the main event. Steve Donald in the 71 took the win, while the 19 of Les Nanson and the 6 kart of Robert Miller finished 2nd and 3rd respectively.

R.L.V. USA – LO206: With the largest field of the day, and many new faces joining the field; all eyes were on the LO206 races. Newcomer and former SportKart driver Patrick Britain in the 6 kart had his work cut out for him all day as he held off the tough competition of 49 – Justin Schuoler and Marcin Balazy in the 2 kart. Consistency and flawless driving made it difficult for Schuoler or Balazy to make a move and take the top spot of the podium away from Britain.

In the newly formed LO206 Jr. field was the 24 of Justice Calabro and Nigel Fuentes in the 224 kart. Both drivers battled hard all day but in the end it was Justice taking the checkered flag with Nigel close behind him.

Rebel Mutt Racing – Formula 125 Shifter: The solo shifter driver was the 81 of Savannah Ertl, turning some impressive lap times Savannah might be little in size but she is a force to be reckoned with on track.

2 Wild Karting – TaG Senior: TaG Senior saw some new names join the field this weekend. The 25c of Logan Calvin, another SportKart driver, battled with points leader Robby Stanovich in the 44c and Antonio de Lis in the 87c. Robby would turn fast time in qualifying and take the win in both heat races of the day but too many drivers vying for the same spot in turn one mixed up the field and in the end it was the 87c of Antonio de Lis taking the win followed by the 044c of Aidan Yoder and the 44c of Robby Stanovich on the 3rd step of the podium.

CRG SoCal – TaG Junior: In TaG Junior the 28c of Keawn Tandon was holding his own amongst the TaG Senior drivers but a late race incident ended his day early.

Jr. 1 Comer: Another Schuoler in the field today — Kyle Schuoler in the 46 kart. Kyle spent the track sessions getting used the kart and the track along with the excitement of winning his 1st race and enjoying the view from the top step of the podium.

100cc Masters: One of the smaller fields of the day but always fun to watch, the number 99 of Arman Cornell was fast all day, unfortunately his race ended early on lap three of the main event giving the win to the 890 of Michael Boyer and the 91 of Philip Friese taking 2nd.

100cc Senior: The senior category was contested by the 113c of Jared Patterson and Christopher de Lis in the 5.

Tri-C Karters hopes everyone enjoys August off and that drivers and teams can enjoy some time at the beach or around the BBQ with family and friends. Racing will resume on Saturday, September 3rd. Be sure to pre-register for September’s race and enjoy registration at a discounted rate at www.tri-ckarters.org